May 22, 2017 - Can you name the seven uniformed services of the United States? Most likely, you can name five—Army, Navy, Marine Corps, Air Force, and Coast Guard. You may even get to six if you know that the U.S Public Health Service has a uniformed division. What is that seventh uniformed service? Don’t feel bad if you can’t come up with it, even some members of the military haven’t heard of the NOAA Corps, despite the service approaching its 100-year anniversary. Ensign Matthew Bissell explores the history of NOAA Corps. 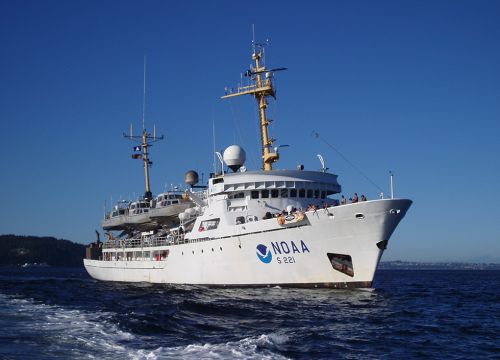 NOAA Ship Rainier is a hydrographic survey vessel that maps the ocean to aid maritime commerce, improve coastal resilience, and understand the marine environment. Rainier’s officers, technicians, and scientists log the data that NOAA cartographers use to create and update the nation’s nautical charts with ever-increasing data richness and precision. Image credit: NOAA.

May 22, 2017 - Can you name the seven uniformed services of the United States?

Most likely, you can name five—Army, Navy, Marine Corps, Air Force, and Coast Guard. You may even get to six if you know that the U.S Public Health Service has a uniformed division.

What is that seventh uniformed service?

Don’t feel bad if you can’t come up with it, you are not alone, even some members of the military haven’t heard of the NOAA Corps, despite the service approaching its 100-year anniversary.

I experienced the Corps’ low profile first hand when I showed up for my physical screening at the military’s processing station in Los Angeles, California. I was denied entry because the security guard didn’t believe the NOAA Corps was a uniformed service. I only gained entry after proving its existence by pulling up a Wikipedia entry on my phone.

At that early stage in my NOAA Corps career, even I was largely unaware of the rich history and incredibly valuable service I was to become part of. 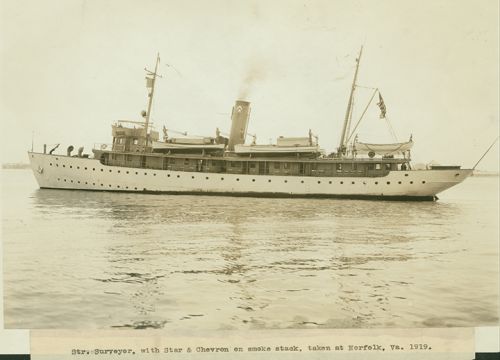 Coast and Geodetic Survey Ship SURVEYOR off Norfolk, Virginia, in 1919, showing Star and Chevron on stack for having taken part in WWI combat operations in the North Atlantic. Image credit: NOAA Photo Library.

The Civil War to World War I

NOAA Corps officially began on May 22, 1917 (46 days after the nation entered World War I). To understand the origins of NOAA, and its commissioned Corps, we need to go even further back in history, to 1807 when President Thomas Jefferson signed a bill initiating the first survey of the nation’s coast. The result was the formation of the U.S. Survey of the Coast, later named the U.S. Coast Survey—the nation’s oldest scientific federal agency.

Initially consisting of civilian surveyors, cartographers, and engineers, as well as commissioned officers from the Army and Navy, the agency charted the nation’s waterways.

Once the Civil War erupted in 1861 the Army and Navy officers in the Coast Survey were recalled to their respective services. The survey’s remaining civilians volunteered their skills in support of the Union, serving in both the Army and Navy. In addition to providing valuable mapping and charting services to the Union forces, these civilian surveyors participated in naval blockades and other major offensive actions.

Army commands gave Coast Surveyors military rank while the Navy refused, leaving some coast surveyors in jeopardy of being hung as spies if captured.

When the war ended, the civilian surveyors and Naval officers returned to their charting mission. The scope of this work had now expanded to include a survey of the nation’s interior. In 1878 the U.S. Coast Survey was renamed the U.S. Coast and Geodetic Survey to reflect this new responsibility.

Naval officers were again withdrawn for the Spanish-American War, never to return to the survey. For the next two decades, civilians were in command of the survey ships.

Then in 1915, Ernest Lester Jones, referred to as the father of the NOAA Corps, became director of the organization. With the nation’s involvement in World War I looming, one of Jones’s first actions as director was to publish the coast survey’s contributions to the Civil War. A step that eventually led to establishing the organization as a commissioned service.

In May 1917, a law established the United States Coast and Geodetic Survey as a commissioned, uniformed service allowing integration into other uniformed services and removing the threat of spying accusations if captured in the line of duty.

When we entered World War I, many survey officers assumed vital roles within the Army, Navy, and Marine Corps. This integration into other services repeated during World War II.

After each wartime involvement, survey officers resumed their peacetime duties of surveying the nation’s coasts. These duties evolved to include worldwide oceanographic cruises, arctic expeditions, and national defense projects.

In 1970, a national scientific agency merger created the National Oceanic and Atmospheric Administration and the survey became NOAA Corps.

Throughout the last 100 years, NOAA Corps officers have continued the important work of surveying the nation’s waterways and ensuring safe and open navigation for maritime commerce.

In addition to surveying, NOAA Corps officers serve as operational specialists aboard the nation’s research ships and airplanes, as well as in land-based positions within NOAA’s other divisions. Typically, a NOAA Corps officer will rotate between two-year sea assignments and three-year land based assignments throughout their careers.

After my initial experience in Los Angeles, I started a 16-week Basic Officer Training Course at the Coast Guard academy in Connecticut, along with 15 other NOAA Corps candidates. After graduation, my first assignment was aboard NOAA’s hydrographic survey vessel, Rainer. I spent two years on Rainier surveying coastal Alaska, updating nautical charts originally created by our NOAA Corps ancestors over one hundred years ago.

Technology has advanced our ability to map the sea floor since those early efforts. Still, it’s absolutely jaw-dropping how accurate the old charts are, given the limited technology of the time.

After two years at sea, I am now serving in the Office of Response and Restoration’s Emergency Response Division, continuing a proud NOAA Corps history of serving our nation through science.

Ensign Matt Bissell came to NOAA from the Ocean Institute in Southern California where he was a science educator and floating lab technician. Bissell has a Master of Science degree in Geographic Information Science and Technology and a Bachelor of Science degree in Earth System Science. Bissell now resides in Seattle with his wife and one-year-old daughter. Special thanks to Albert “Skip” Theberge, at the NOAA Central Library for help with this article.