FEBRUARY 19, 2015 -- Every year high school students across the country compete in the National Ocean Sciences Bowl to test their knowledge of the marine sciences, ranging from biology and oceanography to policy and technology. This year's competition will quiz students on "The Science of Oil in the Ocean." As NOAA's center for expertise on oil spills, the Office of Response and Restoration has been a natural study buddy for these aspiring ocean scientists. In addition to providing some of our reports as study resources, three of our experts recently answered students’ questions about the science of oil spills in a live video Q&A. In an online event hosted by the National Ocean Sciences Bowl, NOAA environmental scientist Ken Finkelstein, oceanographer Amy MacFadyen, and policy analyst Meg Imholt fielded questions on oil-eating microbes, oil’s movement in the ocean, and much more. Here is a sampling of the more than a dozen questions asked and answered, plus a bit of extra research to help you learn more. (You also can view the full hour-long video of the Q&A.) What are the most important policies that relate to the oil industry? There are lots of policies related to the oil industry. Here are a few that impact our work:

How do waves help transport oil? Waves move oil in a few ways. First is surface transport. Waves move suspended particles in circles. If oil is floating on the surface, waves can move it toward the shore. However, ocean currents and winds blowing over the surface of the ocean are generally much more important in transporting surface oil. For example, tidal currents associated with rising and falling water levels can be very fast—these currents can move oil in the coastal zone at speeds of several miles per hour. Over time, all these processes act to spread oil out. Waves are also important for a mixing process called dispersion. Most oils float on the surface because they are less dense than water. However, breaking waves can drive oil into the water column as droplets. Larger, buoyant droplets rise to the surface. Smaller droplets stay in the water column and move around in the subsurface until they are dissolved and degraded. How widespread is the use of bacteria to remediate oil spills? Some bacteria have evolved over millions of years to eat oil around natural oil seeps. In places without much of this bacteria, responders may boost existing populations by adding nutrients, rather than adding new bacteria. This works best as a polishing tool. After an initial response, particles of oil are left behind.  Combined with wave movement, nutrient-boosted bacteria help clean up those particles. Are oil dispersants such as Corexit proven to be poisonous, and if so, what are potential adverse effects as a result of its use? Both oil and dispersants can have toxicological effects, and responders must weigh the trade-offs. Dispersants can help mitigate oil’s impacts to the shoreline. When oil reaches shore, it is difficult to remove and can create a domino effect in the ecosystem. Still, dispersants break oil into tiny droplets that enter the water column. This protects the shoreline, but has potential consequences for organisms that swim and live at the bottom of the sea. To help answer questions like these, we partnered with the Coastal Response Research Center at the University of New Hampshire to fund research on dispersants and dispersed oil. Already, this research is being used to improve scientific support during spills. What are the sources of oil in the ocean? How much comes from natural sources and how much comes from man-made sources? Oil can come from natural seeps, oil spills, and also runoff from land, but total volumes are difficult to estimate. Natural seeps of oil account for approximately 60 percent of the estimated total load in North American waters and 40 percent worldwide, according to the National Academy of Sciences in a 2003 report. In 2014, NOAA provided scientific support to over 100 incidents involving oil, totaling more than 8 million gallons of oil potentially spilled. Scientists can identify the source of oil through a chemical technique known as oil fingerprinting. This provides evidence of where oil found in the ocean is from. An important factor is not only how much oil is in the environment, but also the type of oil and how quickly it is released. Natural oil seeps release oil slowly over time, allowing ecosystems to adapt. In a spill, the amount of oil released in a short time can overwhelm the ecosystem. What is the most effective order of oil spill procedure? What is currently the best method? It depends on what happened, where it's going, what's at risk, and the chemistry of the oil.  Sometimes responders might skim oil off the surface, burn it, or use pads to absorb oil. The best response is determined by the experts at the incident. What do you do with the oil once it is collected? Is there any way to use recovered oil for a later use? Oil weathers in the environment, mixing with water and making it unusable in that state. Typically, collected oil has to be either processed before being recycled or sent to the landfill, along with some oiled equipment. Oil spill cleanups create a large amount of waste that is a separate issue from the oil spill itself. Are the effects of oil spills as bad on plants as they are on animals? Oil can have significant effects on plants, especially in coastal habitat. For example, mangroves and marshes are particularly sensitive to oil. Oil can be challenging to remove in these areas, and deploying responders and equipment can sometimes trample sensitive habitat, so responders need to consider how to minimize the potential unintended adverse impact of cleanup actions. Does some of the crude oil settle on the seafloor? What effect does it have? Oil usually floats, but can sometimes reach the seafloor. Oil can mix with sediment, separate into lighter and heavier components, or be ingested and excreted by plankton, all causing it to sink, with potential impacts for benthic (bottom-dwelling) creatures and other organisms. When oil does reach the seafloor, removing it has trade-offs. In some cases, removing oil could require removing sediment, which is home to many important benthic (bottom-dwelling) organisms. Responders work with scientists to decide this on a case-by-case basis. To what extent is the oil from the Deepwater Horizon oil spill still affecting the Gulf of Mexico ecosystem? NOAA and our co-trustees have released a number of studies as part of the ongoing Natural Resource Damage Assessment for this spill and continue to release new research. Some public research has shown impacts on dolphins, deep sea ecosystems, and tuna. Other groups, like the Gulf of Mexico Research Initiative, are conducting research outside of the Natural Resource Damage Assessment. How effective are materials such as saw dust and hair when soaking up oil from the ocean surface? Oil spill responders use specialized products, such as sorbent materials, which are much more effective. 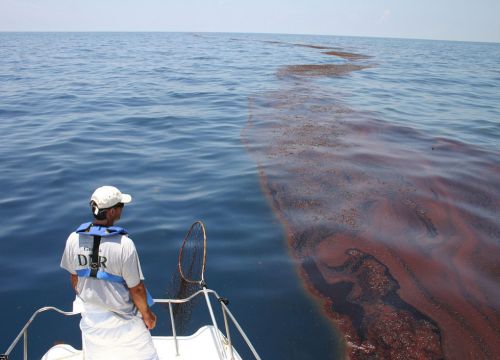 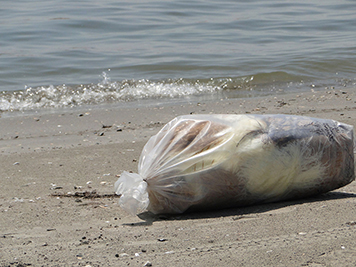 Oiled waste on the beach in Port Fourchon, Louisiana. On average, oil spill cleanups generate waste 10 times the amount of oil spilled. (NOAA)
Back to top