NOAA Hauls 50 Metric Tons of Debris out of Hawaiian Waters 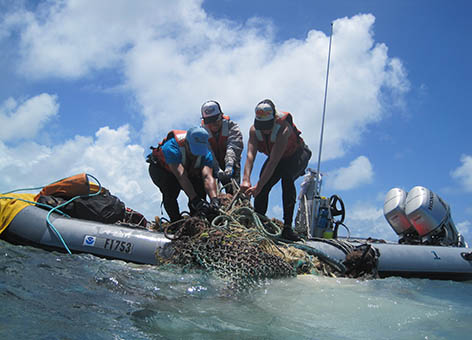 AUG. 2, 2012 — With their eyes on the ocean, a team of 17 NOAA scientists recently removed nearly 50 metric tons of marine debris—mostly abandoned fishing nets and plastics—from the turquoise waters of Papahānaumokuākea Marine National Monument in the Northwestern Hawaiian Islands. Part of an annual effort to restore the area's coral ecosystems, this latest sweep of marine debris also scanned for items that might have been carried there from the 2011 Japan tsunami. However, nothing could be linked directly to the tragedy.

"While we did not find debris with an obvious connection to last year's tsunami, this mission was a great opportunity to leverage activities that had already been planned and see what we might find," said Carey Morishige, Pacific Islands regional coordinator for the NOAA Marine Debris Program, part of the Office of Response and Restoration. "It's also an important reminder that marine debris is an everyday problem, especially here in the Pacific."

Through NOAA's Damage Assessment, Restoration, and Remediation Program, the Office of Response and Restoration is helping restore coral reefs here after the M/V Casitas grounded on Pearl and Hermes Atoll in the Northwestern Hawaiian Islands in July 2005. Part of the funding for the marine debris removal survey comes from the legal settlement for the Casitas ship grounding, as well as from the NOAA Marine Debris Program and Papahānaumokuākea Marine National Monument. This recurring issue of marine debris threatens Hawaiian monk seals, sea turtles, and other marine life in the coral reef ecosystems of the Northwestern Hawaiian Islands. The scientists on this mission loaded the massive amounts of collected debris on to the 224-ft. NOAA Ship Oscar Elton Sette. 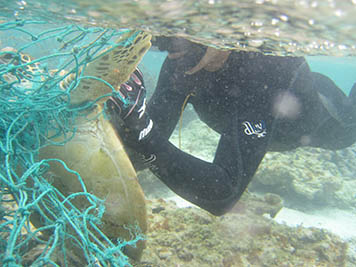 "What surprises us is that after many years of marine debris removal in Papahānaumokuākea and more than 700 metric tons of debris later, we are still collecting a significant amount of derelict fishing gear from the shallow coral reefs and shorelines," said Kyle Koyanagi, marine debris operations manager at NOAA Fisheries' Pacific Islands Fisheries Science Center and chief scientist for the mission. "The ship was at maximum capacity and we did not have any space for more debris."

This year, marine debris was collected from waters and shorelines around the islands and atolls of the Northwestern Hawaiian Islands: Kure Atoll, Midway Atoll, Pearl and Hermes Atoll, Lisianski Island and Laysan Island. Marine debris removed during this project will be used to create electricity through Hawaii's Nets to Energy Program, a public-private partnership. Since 2002, it has collected and converted more than 730 metric tons of abandoned fishing gear into electricity—enough to power nearly 350 Hawaii homes for a year.