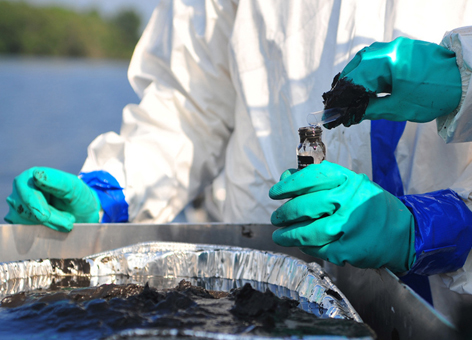 APRIL 23, 2013 — Unless there is a big spill or accident, most people probably don't think much about different types of crude oil, where it comes from, or how it is transported.

Yet there is an ongoing national debate about Canada's Alberta oil sands and whether to complete the Keystone XL pipeline that would carry Alberta oil sands products to refineries in the U.S. Gulf Coast. This proposed pipeline has gotten a lot of attention, but there are existing pipelines carrying oil sands products around Canada and across the border into the U.S., as well as tanker, barge, and rail operations doing the same.

The Exxon Pegasus pipeline spill in Mayflower, Ark., on March 29, 2013, was a reminder that oil sands are already being transported and, whenever oil is transported, there is risk of a spill.

Oil sands are considered an unconventional oil type that has been growing in prominence as oil prices fluctuate and production technologies improve. As a result, there are many questions about how best to respond to spills of crude oil products derived from oil sands. One of the major concerns is the buoyancy of oil sands products, and their potential to sink, especially in sediment-laden waters. The U.S. Environmental Protection Agency is still cleaning up submerged oil from the July 2010 Enbridge pipeline spill in Michigan's Kalamazoo River.

On April 16–17, NOAA's Office of Response and Restoration participated in an Oil Sands Products Forum held at NOAA's Western Regional Center in Seattle, Wash. The forum was sponsored by the Washington State Department of Ecology Spills Program, U.S. Coast Guard, and the Pacific States/British Columbia Oil Spill Task Force. The University of New Hampshire Center for Spills in the Environment facilitated the forum.

The two-day meeting included a full day of presentations and discussions about oil sands (also known as tar sands or bitumen) and their related products—covering everything from extraction, refining, and transportation to chemistry, how they move and react in the environment, and recent case studies of spill responses. Over 50 environmental specialists, oil spill planners, and responders attended from government agencies, tribal governments, nongovernmental organizations, and industry. Several oil sands experts from Canadian agencies and organizations also attended and presented.

On the second day, spill responders were presented with four different spill scenarios involving oil sands products, and the potential issues and challenges highlighted by the different spill situations were thoroughly discussed and recorded. Presentations and meeting notes will be made available through the Center for Spills in the Environment. The focus of this forum was not to discuss whether or not oil sands should be exploited as a resource, but rather, how to prepare better for and then deal effectively with a spill of oil sands products when it happens.

What Do We Know About Transporting Oil Sands in the United States? Read a guest blog post from a graduate research team at the University of Washington about their work gathering and interpreting information to help NOAA's Office of Response and Restoration better prepare for a potential spill of Canadian oil sands product in U.S. waters.