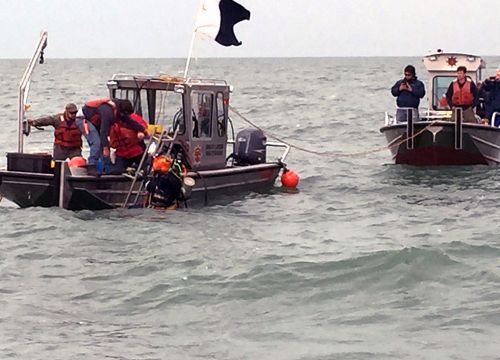 Contractors conduct dive operations at the site of a sunken barge near the Kelley's Island Shoal in Lake Erie, Oct. 21, 2015. The divers were trying to establish the identity of the barge and if it or any of its cargo poses an environmental threat. (U.S. Coast Guard)

OCTOBER 28, 2015 -- The 1937 sinking of a small barge in Lake Erie went largely unnoticed at the time, but the ill-fated tank barge Argo is in the news now that the wreck’s exact location—along with a leak—has been discovered. And it wasn't in Canadian waters, as previously thought.

That piece of underwater detective work by the Cleveland Underwater Explorers, combined with historical research done as part of NOAA's RULET program (Remediation of Underwater Legacy Environmental Threats) which in 2013 identified it as a potentially polluting shipwreck, have been key factors in the developing response to the Argo. Recently found to be on the U.S. side of the border with Canada, the wreck has been traced to reports of pollution on Lake Erie in both nations, indicating that the Argo is leaking.

At the time of the sinking, the barge was reportedly loaded with 4,762 barrels of crude oil and the chemical benzol. The U.S. Coast Guard, with support from NOAA's Office of Response and Restoration and in collaboration with Canada, is ramping up pollution response efforts to address the leaking Great Lakes wreck. While underwater response technologies do exist to address wrecks filled with oil, there are a lot of steps involved before a wreck can be safely remediated.

Early efforts will focus on identifying whether the barge is leaking petroleum or benzol (or both) and determining whether the source of the leaks can be controlled immediately. The Coast Guard is evaluating whether and how to safely remove the cargo from the sunken barge to reduce the likelihood of future pollution. NOAA is providing environmental and chemical data, weather forecasting, modeling of observed oil sheens back to the wreck, and other observations to support the response.

Evaluating the magnitude of the leaks will alert us to any significant threats to people or to fish, birds, or other wildlife in the lake. NOAA and other organizations are analyzing samples of lake water and zebra mussels attached to the wreck to determine whether concentrations of hazardous chemicals are present or exceed levels of concern.

If it appears that the Argo has been leaking for some time or if the concentrations of detected pollutants are expected to be toxic to fish or wildlife, NOAA and other agencies would consider pursuing a natural resource damage assessment, with the goal of evaluating harm to public natural resources and determining whether and which restoration actions would compensate for injuries. As "natural resource trustee" agencies, NOAA, U.S. Fish and Wildlife Service, and the State of Ohio would perform these assessments over the next few months.

One of the compelling aspects of shipwrecks is the way they capture a moment in time. Looking back at the major events of that time, it is easy to see how a barge accident in the Great Lakes would barely garner a mention in the local papers. In 1937 Franklin Roosevelt had just been re-elected president, Adolf Hitler was chancellor of Germany, Benito Mussolini was prime minister of Italy, and Joseph Stalin was in power in the Soviet Union. Even in the area of transportation, other momentous events dominated the news. The Golden Gate Bridge had just opened, the zeppelin Hindenburg was destroyed by fire while landing in New Jersey, and American aviation pioneer Amelia Earhart disappeared over the Pacific. Yes, 1937 was a long time ago.

It was well before the Oil Pollution Act of 1990 and other laws and regulations for the transport of oil and response to spills. When the Argo sank in a storm on October 20—79 years ago—the crew was safely rescued and the barge was left on the bottom, slowly sinking into the lake bed sediments. The location wasn't well known, even to maritime historians. We weren't even sure if the wreck was in the U.S. or Canada, which shows how little is often known about the thousands of shipwrecks in North American waters—that is, until they start releasing their long-hidden cargo.

Update December 10, 2016: Learn about the fate of Barge Argo and its contents on board.

Stay tuned for a special series in early November when we'll be diving deeper into the issues of sunken, abandoned, and derelict vessels—covering everything from when they become maritime heritage sites to how we deal with those that turn into polluting eyesores.