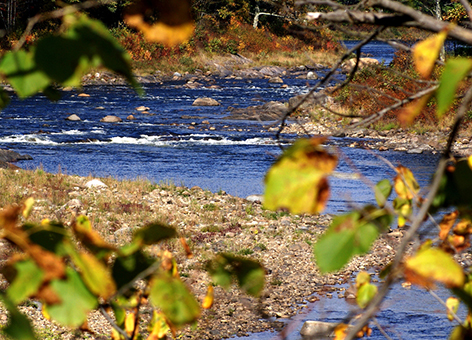 A view of the Hudson River in the fall. NOAA is involved with assessing the environmental impacts to the Hudson River due to industrial pollution from two General Electric plants. (Photo: Roy Saplin, Creative Commons Attribution-NonCommercial 2.0 Generic License)

JUNE 28, 2013 -- June is National Rivers Month. You might think those of us at the National Oceanic and Atmospheric Administration (NOAA) are concerned only with water in the ocean or sky. But we're actually big fans of rivers too. Many rivers flow out to the ocean, creating areas where fresh and saltwater mix called estuaries. These important and unique ecosystems are where many animal species, especially fish and birds, eat, nest, and breed. NOAA also keeps an eye on rivers when they get polluted, either from oil spills or industrial pollution, and looks out in particular for the interests of aquatic species that spend time both in the ocean and rivers. Just take a look at a few examples of how NOAA protects and preserves America's rivers:

You can hear more about the importance of rivers—and keeping them healthy—from the U.S. Fish and Wildlife Service’s Margaret Byrne, an environmental health scientist involved in the Hudson River Natural Resource Damage Assessment:

My work on the Hudson River has taught me about the incredibly diverse and important habitats found in this unique place. The Hudson River has been called "the river that flows in two directions" because the tides of the Atlantic Ocean push water back upstream twice a day. These tides help to create homes for many different kinds of plants and animals ... This month, I celebrate National Rivers Month with a solemn knowledge that the incredible ecological resources of the Hudson River have been extensively contaminated with chemicals called polychlorinated biphenyls, or PCBs. These toxic chemicals have been found in the water, fish and other wildlife, and sediment of the Hudson River below General Electric Company’s plants at Hudson Falls and Fort Edward in New York. We know that PCBs can cause serious harm to wildlife and other natural resources and we are in the process of determining the scope of the injuries caused by this contamination. (Read my colleague's blog post about studies on Hudson River mink and learn about the difference between the EPA's Superfund cleanup and the Natural Resource Damage Assessment process.)

Read the rest of Byrne's post over at the U.S. Fish and Wildlife Service Northeast Region blog, and let us know how you help keep rivers and their inhabitants safe and healthy. Photo: Roy Saplin, Creative Commons Attribution-NonCommercial 2.0 Generic License