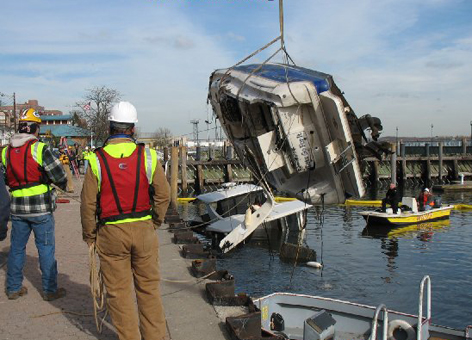 On November 15, 2012, a Hurricane Sandy response team oversees the removal of a sunken boat that was discharging oil off of Staten Island, N.Y. (U.S. Environmental Protection Agency)

NOV. 16, 2012 — Weeks after Hurricane Sandy roared across the East Coast, NOAA's Office of Response and Restoration still has several personnel on scene at the pollution response command post on Staten Island, N.Y. We are working to assess and reduce the remaining environmental impacts from the oil spills, debris, and subsequent cleanup in the wake of Hurricane Sandy.

At this point, our Scientific Support Coordinators are still participating in aerial surveys of the areas affected by oil spills and debris scattered throughout the waters in and around New Jersey and New York. They have been providing guidance on reducing environmental impacts to sensitive habitats during the recovery of freight containers which may contain hazardous materials, large fuel tanks, and large debris, such as a large pleasure craft grounded in coastal wetlands. In addition, they continue to coordinate with the Coast Guard and state environmental officials to establish when it is appropriate to transition from active oil recovery operations, which might involve cleanup workers pumping oil out of the water, to passive cleanup (using absorbent materials) with monitoring.

Our GIS specialists also remain at the command post, managing response data in the web-based data mapping tool, ERMA®. This team has been working with other NOAA offices to display in ERMA post-storm data such as the National Geodetic Survey aerial imagery and Office of the Coast Survey side scan sonar results. Throughout the pollution response, they have been training responders in the command post to use ERMA and providing technical support, for example, improving the organization and flow of data into the application. 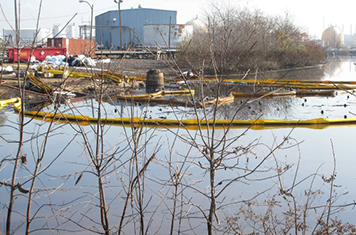 Containment boom surrounds the oil and debris released from tanks at the Phillips 66 Refinery in Linden, N.J., on November 12, 2012. (NOAA)

They also have been working with other government agencies, including EPA, FEMA, and the states of New York and New Jersey, to obtain and share data for the response. In the week after the storm, NOAA's damage assessment staff began collecting data on impacts to natural resources, especially affected coastal habitats, and coordinating with state and federal co-trustees to determine whether to pursue a natural resource damage assessment and implement environmental restoration. They, along with representatives from New Jersey Department of Environmental Protection and Motiva, performed land and boat surveys of affected sites, including several creeks in New Jersey and New York possibly oiled by the Motiva Refinery spill in Sewarren, N.J. Currently, this team of federal and state trustees is investigating reports of oiled wildlife and habitats in the area of the oil spilled at the Phillips 66 Refinery in Linden, N.J.

Our NOAA damage assessment experts use reports from our responders' aerial surveys to target which creeks and wetland areas to survey for injuries. Recovery after hurricanes such as Sandy can take a very long time, and our office likely will be active in the efforts to promote environmental recovery in the months to come. Stay tuned for more photos, maps, and updates on the pollution-related response efforts at IncidentNews.