JULY 25, 2014 -- As federal leaders in oil spill response science, NOAA's Office of Response and Restoration is grateful for each oil spill which does not take place, which was fortunately the case on July 24, 2014 in Seattle, Washington, near our west coast office. A train passing through the city ran off the tracks, derailing three of its 100 tank cars carrying Bakken crude oil from North Dakota to a refinery in the port town of Anacortes, Washington. No oil spilled or ignited in the accident. However, that was not the case in five high-profile oil train derailments and explosions in the last year, occurring in places such as Casselton, North Dakota, when a train carrying grain derailed into an oil train, causing several oil tank cars to explode in December 2013. Oil production continues to grow in North America, in large part due to new extraction technologies such as hydraulic fracturing (fracking) opening up massive new oil fields in the Bakken region of North Dakota and Montana. The Bakken region lacks the capacity to transport this increased oil production by the most common methods: pipeline or tanker. Instead, railroads are filling this gap, with the number of tank cars carrying crude oil in the United States rising more than 4,000 percent between 2009 (9,500 carloads) and 2013 (407,761). Just a day before this derailment, Seattle City Council signed a letter to the U.S. Secretary of Transportation, urging him to issue an emergency stop to shipping Bakken crude oil in older model tank train cars (DOT-111), which are considered less safe for shipping flammable materials. (However, some of the proposed safer tank car models have also been involved in oil train explosions.) According to the Council's press release, "BNSF Railway reports moving 8-13 oil trains per week through Seattle, all containing 1,000,000 or more gallons of Bakken crude." The same day as the Council's letter, the Department of Transportation proposed rules to phase out the older DOT-111 model train cars for carrying flammable materials, including Bakken crude, over a two-year period. NOAA's Office of Response and Restoration is examining these changing dynamics in the way oil is moved around the country, and we recently partnered with the University of Washington to research this issue. These changes have implications for how we prepare our scientific toolbox for responding to oil spills, in order to protect responders, the public, and the environment. For example, based on our knowledge of oil chemistry, we make recommendations to responders about potential risks during spill cleanup along coasts and waterways. We need to know whether a particular type of oil, such as Bakken crude, will easily ignite and pose a danger of fire or explosion, and whether chemical components of the oil will dissolve into the water, potentially damaging sensitive fish populations.

Our office responded to a spill of Bakken crude oil earlier this year on the Mississippi River. On February 22, 2014, the barge E2MS 303 carrying 25,000 barrels of Bakken crude collided with a towboat 154 miles north of the river’s mouth. A tank of oil broke open, spilling approximately 31,500 gallons (750 barrels) of its contents into this busy waterway, closing it down for several days. NOAA provided scientific support to the response, for example, by having our modeling team estimate the projected path of the spilled oil. We also worked with our partners at Louisiana State University to analyze samples of the Bakken crude oil. We found the oil to have a low viscosity (flows easily) and to be highly volatile, meaning it readily changes from liquid to gas at moderate temperatures. It also contains a high concentration of the toxic components known as polycyclic aromatic hydrocarbons (PAHs) that easily dissolve into the water column. For more information about NOAA's involvement in this incident, visit IncidentNews. 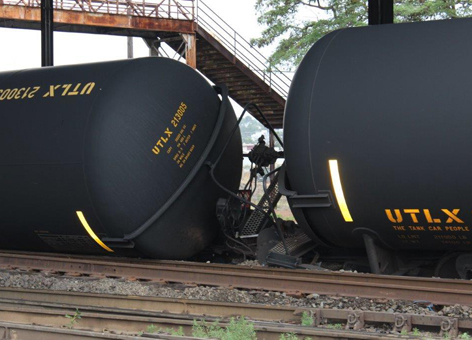 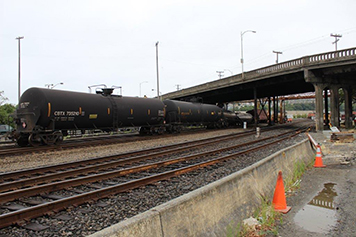