MARCH 3, 2016 -- Amy Uhrin was sensing a challenge ahead of her. As a NOAA scientist working on her PhD, she was studying the way seagrasses grow in different patterns along the coast, and she knew that these underwater plants don’t always create lush, unbroken lawns beneath the water's surface. Where she was working, off the North Carolina coast near the Outer Banks, things like the churning motion of waves and the speed of tides can cause seagrass beds to grow in patchy formations. Clusters of bigger patches of seagrass here, some clusters of smaller patches over there. Round patches here, elongated patches over there. Uhrin wanted to be able to look at aerial images showing large swaths of seagrass habitat and measure how much was actually seagrass, rather than bare sand on the bottom of the estuary. Unfortunately, traditional methods for doing this were tedious and tended to produce rather rough estimates. These involved viewing high-resolution aerial photographs, taken from fixed-wing planes, on a computer monitor and having a person digitally draw lines around the approximate edges of seagrass beds. While that can be fairly accurate for continuous seagrass beds, it becomes more problematic for areas with lots of small patches of seagrass included inside a single boundary. For the patchy seagrass beds Uhrin was interested in, these visual methods tended to overestimate the actual area of seagrass by 70% to more than 1,500%. There had to be a better way.

Due to local environmental conditions, some coastal areas are more likely to produce patchy patterns in seagrass, rather than large beds with continuous cover. (NOAA)

At the time, Uhrin was taking a class on remote sensing technology, which uses airborne—or, in the case of satellites, space-borne—sensors to gather information about the Earth's surface (including information about oil spills). She knew that the imagery gathered from satellites (i.e. Landsat) is usually not at a fine enough resolution to view the details of the seagrass beds she was studying. Each pixel on Landsat images is 30 meters by 30 meters, while the aerial photography gathered from low-flying planes often delivered resolution of less than a meter (a little over three feet). Uhrin wondered if she could apply to the aerial photographs some of the semi-automated classification tools from imagery visualization and analysis programs which are typically used with satellite imagery. She decided to give it a try. First, she obtained aerial photographs taken of six sites in the shallow coastal waters of North Carolina's Albemarle-Pamlico Estuary System. Using a GIS program, she drew boundaries (called "polygons") around groups of seagrass patches to the best of her ability but in the usual fashion, which includes a lot of unvegetated seabed interspersed among seagrass patches. 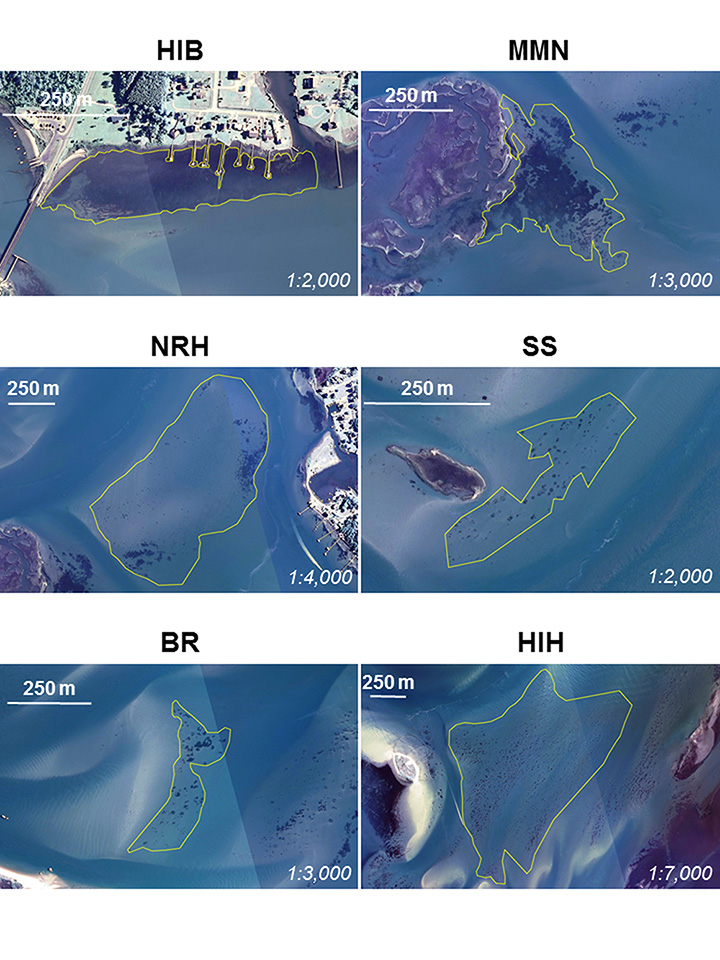 Aerial photographs show varying patterns of seagrass growth at six study sites off the North Carolina coast. The yellow line shows the digitally drawn boundaries around seagrass and how much of that area is unvegetated for patchy seagrass habitat. (North Carolina Department of Transportation)

Next, Uhrin isolated those polygons of seagrass beds and deleted everything else in each image except the polygon. This created a smaller, easier-to-scan area for the imagery visualization program to analyze. Then, she "trained" the program to recognize what was seagrass vs. sand, based on spectral information available in the aerial photographs. Though limited compared to what is available from satellite sensors, aerial photographs contain red, blue, and green wavelengths of light in the visible spectrum. Because plants absorb red and blue light and reflect green light (giving them their characteristic green appearance), Uhrin could train the computer program to classify as seagrass the patches where green light was reflected.

Classify in the Sky 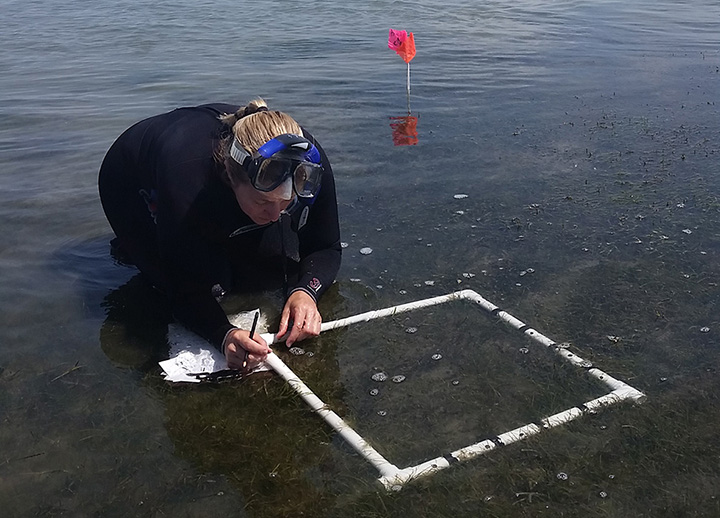 NOAA scientist Amy Uhrin found a more accurate and efficient approach to measuring how much area was actually seagrass, rather than bare sand, in aerial images of coastal North Carolina. (NOAA)

To Uhrin's excitement, the technique worked well, allowing her to accurately identify and map smaller patches of seagrass and export those maps to another computer program where she could precisely measure the distance between patches and determine the size, number, and orientation of seagrass patches in a given area. "This now allows you to calculate how much of the polygon is actually seagrass vegetation," said Uhrin, "which is good for fisheries management." The young of many commercially important species, such as blue crabs, clams, and flounder, live in seagrass beds and actively use the plants. Young scallops, for example, cling to the blades of seagrass before sliding off and burrowing into the sediment as adults. In addition, being able to better characterize the patterns of seagrass habitat could come in handy during coastal restoration planning and assessment. Due to local environmental conditions, some areas are more likely to produce patchy patterns in seagrass. As a result, efforts to restore seagrass habitat should aim for restoring not just cover but also the original spatial arrangement of the beds. And, as Uhrin noted, having this information can "help address seagrass resilience in future climate change scenarios and altered hurricane regimes, as patchy seagrass areas are known to be more susceptible to storms than continuous meadows." The results of this study, which was done in concert with a colleague at the University of Wisconsin-Madison, have been published in the journal Estuarine, Coastal and Shelf Science. 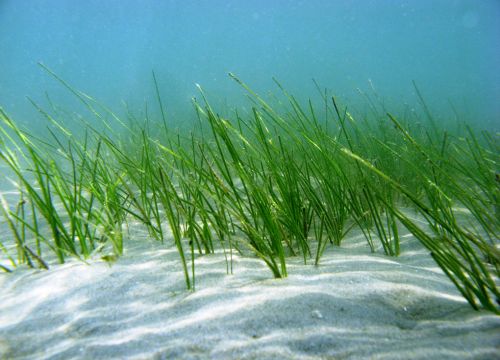 Seagrass beds serve as important habitat for a variety of marine life, and understanding their growth patterns better can help fisheries management and restoration efforts. (NOAA)
Back to top