A NOAA Scientist's Message on World Ocean Day: Follow Your Interests on Whatever Path They Take You 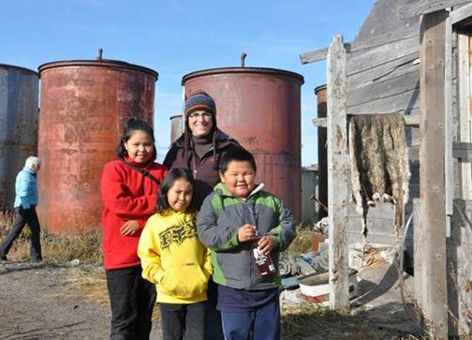 Dr. Amy Merten visits with children from the Alaskan village of Kivalina. She was in Alaska for an oil spill workshop in the village of Kotzebue. Amy serves as Chief of the Spatial Data Branch of the Assessment and Restoration Division in NOAA's Office of Response and Restoration.

JUNE 8, 2012 — Happy World Ocean Day, a global celebration honoring the ocean that gives us so much and links us across the globe. This year the theme is Youth: the Next Wave for Change. The Ocean Project, which coordinates World Ocean Day, believes that we share the responsibility of ensuring our ocean is protected for future generations. In that same vein, the scientists at NOAA's Office of Response and Restoration strive to share their knowledge and experiences with young people to inspire them to careers in ocean science. One of our scientists, Dr. Amy Merten, recently spoke to a group of 150 students from Washington's Salish Sea Expeditions program as they nervously prepared to present their final research projects. The program provides a unique marine science experience to middle and high school students as they navigate Puget Sound on a 61-foot sailing vessel and work on group research projects. As she addressed the budding young scientists, Dr. Merten spoke not only about the problems she works on now, but also the circuitous path it took to get her there. As a biology undergraduate student in the early 1990s, a senior project introduced her to cutting-edge oceanography as well as the early discussions of climate change. "This experience exposed me to real scientists, including those in NOAA," Merten explained. "It was my first exposure to NOAA, and I knew that's where I wanted to be." This experience landed Merten her first job out of college and led her to study the effect of chronic pollution on Chesapeake Bay's food web. As she was finishing her Ph.D. and working at NOAA, she transitioned to the field of emergency response at the Office of Response and Restoration. This took her to several oil spills in the Gulf of Mexico, the 2004 Athos spill in Delaware Bay, and the 2004 Selendang Ayu oil spill off the coast of Unalaska, Alaska. During this time, Merten also aided Vietnamese scientists in developing their nation's oil spill response plan. In 2005, she helped mitigate the effects of numerous oil and chemical spills caused by Hurricanes Katrina and Rita. "Working on the ground with oil spill responders gave me practical experience for applying my academic and policy expertise," Merten recalled.

Describing her work in the aftermath of the hurricanes, Merten told how she came to the difficult decision to burn spilled oil in a contaminated marsh near a Gulf of Mexico refinery. Because there were potential risks, her decision was met with some skepticism, but as a result, the marsh showed remarkable recovery after the burn.

Before, during, and after a successful effort to restore oiled marsh in the Gulf of Mexico by burning it.

She emphasized to the students that such problems can be very complex, and frequently without black-and-white solutions. "You never know when a leadership opportunity will emerge," she reflected. "You have to trust your instinct and your skills, and people will work with you to overcome risky challenges." 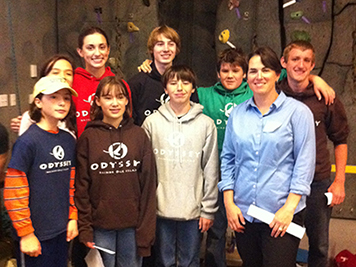 Later, Merten's team finished developing a mapping tool, the Environmental Response Management Application (ERMA), coincidentally just in time to be put to use for the 2010 Deepwater Horizon/BP oil spill. The idea for ERMA was conceived by Merten and a University of New Hampshire scientist to consolidate environmental data on a web mapping platform. It was used by responding agencies, corporations, and others as the common operating picture throughout the oil spill cleanup and damage assessment in the Gulf of Mexico. Wrapping up with where her current passion is taking her now, Merten discussed how the Arctic environment is changing and the challenges that oil spills, a potential consequence of increased drilling and shipping in that region, could pose to local communities. She now is working on solutions to the unique and complicated problems an Arctic oil spill response could present: an isolated environment, sub-freezing temperatures, unique cultures, and what happens when oil mixes with ice. Merten, a technical advisor to the Salish Sea Expeditions program, ended her speech by saying, "I hope your experience at Salish gives you a foundation in science, and you're able to think back to what you've accomplished to help you move forward in the future." Her overriding message to the young scientists was one of encouragement: Follow your interests, don't always expect a linear career path, stay curious, and work hard.