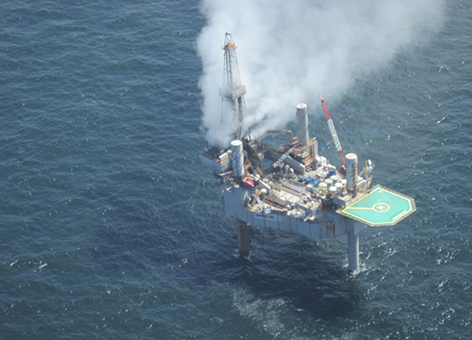 The Hercules 265 drilling rig, located about 50 miles off the coast of Louisiana, caught fire the night of July 23. Earlier that day, the rig experienced a loss of well control while drilling for natural gas. The cloud of leaking natural gas from the well, pictured here, ignited. No one was on board at the time and no injuries have been reported. (Bureau of Safety and Environmental Enforcement)

JULY 25 -- The Hercules 265 jack-up drilling rig, which caught fire about 50 miles offshore of Louisiana after experiencing a loss of well control, no longer has natural gas leaking out of the well. The U.S. Coast Guard and Bureau of Safety and Environmental Enforcement, via aerial surveys (overflights), have confirmed that the flow of gas from the well has stopped, though a diminished fire continued to burn residual gas near the well until today. On Tuesday, July 23, the rig operator lost control of the natural gas well during a drilling operation in the Gulf of Mexico. All 44 members of its crew were evacuated safely into life rafts and were later picked up by an offshore supply vessel. Late that night, the leaking gas ignited and the rig caught fire and partially collapsed. The incident occurred at South Timbalier block 220 in about 154 feet of water. The well was releasing natural gas and a small amount of oily fluids, creating a light sheen of variable size. (Gas is often mixed with oily fluids, and the amounts of these fluids vary among reservoirs.) The U.S. Coast Guard has two cutters on scene to provide support. NOAA support has been focused on forecasting the trajectory of the sheen and customized weather reports for the affected area as well as providing technical advice on dealing with methane (a primary component of natural gas) and potential species at risk from hydrocarbon exposure, such as birds, shrimp, fish, sea turtles, and marine mammals. A NOAA scientist and emergency response meteorologist are now at the scene of the response and offering further scientific and weather support as needed. Learn more at the Bureau of Safety and Environmental Enforcement website.