For Oil and Chemical Spills, a New NOAA Tool to Help Predict Pollution's Fate and Effects

JULY 17, 2015 -- Accidents happen. Sometimes, they happen at places with big consequences, such as at a fertilizer factory that uses the chemical ammonia as an active ingredient. An accident in a place like that can lead to situations in which thousands of gallons of this chemical could, for example, be released into a drainage ditch leading to a nearby salt marsh.

When oil or chemicals are released into the environment like this, responders dealing with the pollution are often trying to answer two important questions: What's going to happen to the contaminant released and what, if any, species will be harmed by it?

To help responders answer these questions, NOAA has just released to the public a new software program known as CAFE. 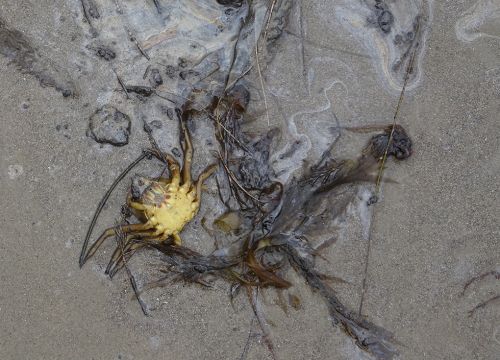 NOAA has released the software program CAFE to help responders dealing with pollution answer two important questions: What's going to happen to the contaminant released and what, if any, species will be harmed by it? (Beckye Stanton, California Department of Fish and Wildlife)

NOAA's Chemical Aquatic Fate and Effects (CAFE) database allows anyone to determine the fate and toxicological effects of thousands of chemicals, oils, and dispersants when released into fresh or saltwater environments.

CAFE has two major components: the Fate module, which predicts how a contaminant will behave in the environment, and the Effects module, which determines the chemical’s potential toxicity to different species.

In the Fate module, CAFE contains data, such as chemical properties, useful in understanding and predicting chemical behavior in aquatic environments. For example, in our ammonia-in-water scenario, CAFE's chemical property data would tell us that ammonia has a low volatilization rate (it doesn’t readily change in form from liquid or solid to gas) and is very soluble in water. That means if spilled into a body of water, ammonia would dissolve in the water and stay there.

In the Effects module, CAFE contains data about the acute toxicity—negative, short-term impacts from short-term exposure—of different chemicals. This module plots that data on graphs known as "Species Sensitivity Distributions." These graphs show a curved line ranking the relative sensitivity of individual species of concern, from the most sensitive to the least sensitive, to a particular chemical over a given period of exposure (ranging from 24 to 96 hours). 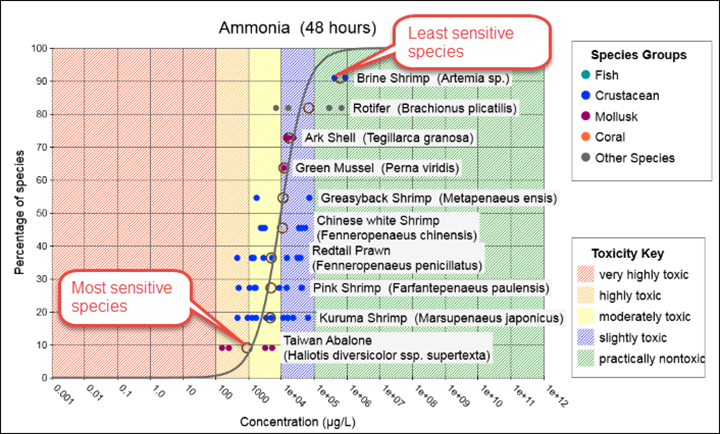 The reactions of different species to chemicals can vary widely. The CAFE database produces these species sensitivity graphs showing the range in sensitivity of select aquatic species to certain chemicals after a given length of exposure. (NOAA)

Again turning to our scenario of an ammonia spill in a salt marsh, the graph here shows how a range of aquatic species would be affected by a 48 hour exposure to ammonia. The Taiwan abalone (a type of aquatic snail) is the most sensitive species because many of these snails would be affected at lower concentrations of ammonia, falling into the orange, highly toxic zone.

On the other hand, the brine shrimp is the least sensitive of this group because these shrimp would have to be exposed to much higher concentrations of ammonia to be affected. Thus the brine shrimp falls into the green, practically nontoxic zone. However, most of the data in this graph seem to fall into the moderately or slightly toxic zones, meaning that ammonia is a toxic chemical of concern.

Using these data from CAFE, you then assess the potential impact of the ammonia spill to the aquatic environment.

You can download version 1.1 of the Chemical Aquatic Fate and Effects (CAFE) database from NOAA's Office of Response and Restoration website at http://response.restoration.noaa.gov/cafe.

Adding to our collection of spill response resources, CAFE will serve as a one-stop, rapid response tool to aid spill responders in their assessment of environmental impacts from chemical and oil spills.