This Thanksgiving story comes to us from Ed Levine, the Regional Operations Supervisor for the East-Gulf of Mexico Region. November 23, 2011 -- After a wonderful family Thanksgiving seven years ago, what we in the response business refer to as the "Usual Notification"—a call in the middle of the night during a long holiday weekend—came true. At 9:30 p.m. on November 26, 2004, the (Black) Friday after Thanksgiving, the tanker Athos I was damaged while docking at the CITGO refinery on the Delaware River and began spilling its cargo of Venezuelan crude oil. By 2:00 a.m., I was requested to go on-scene and support the Coast Guard's response in Philadelphia. My sons and wife were used to this scrambling to pack and run out the door. Little did we know how complicated this response would be and how long it would last! When I arrived, prior to first light, many details were still unknown or just unfolding. We knew the ship was leaking oil, it was leaning to one side, but it was secure at anchor. At that time we didn't know how much oil was leaking, where it was going, how far it would spread, the cause of the damage, the environmental and economic impacts it would have, or the duration of the cleanup. At daylight, the first helicopter surveys found some oil along the Pennsylvania shoreline, but the first reports were not too alarming. But I knew it was important to get some calibrated eyes on the spill, someone with experience spotting oil from the air. It's not as easy as it sounds to conduct an aerial survey. After a few hours in the command post, I had a chance to fly. During my overflight (aerial survey), it was clear that the ship was still leaking. I observed oil many miles up river and in larger concentrations than previously reported. Upon returning to the command post, I told the Captain of the Port, "We need a bigger boat!" This was a major oil spill, and we were going to be here a long time cleaning it up. Little did I know how right I was. The ship's crew was eventually able to transfer cargo around the tanks to stop the outflow of oil, but over 240,000 gallons of heavy crude oil were released from the ship. The cleanup took a full year until all the shorelines were signed off as clean. A nuclear power plant even shut down for over a week. Vessel traffic into the port stopped for eight days until the mysterious object that the vessel struck could be located. Hundreds of birds were oiled. Hundreds of miles of shoreline in three states had to be inspected and the oiled areas cleaned up. Winter operations became brutal, the river eventually froze over and operations ceased for a couple months. In the early weeks of the response, a boat overturned with five people on board. Luckily for them a NOAA ship was nearby and able to rescue all of them. The spilled oil was nearly neutrally buoyant in the brackish waters of the Delaware Estuary, meaning the oil was just as likely to sink as it was to float, complicating cleanup operations. Eventually, the shorelines were cleaned, and damages to natural resources were assessed and restored. 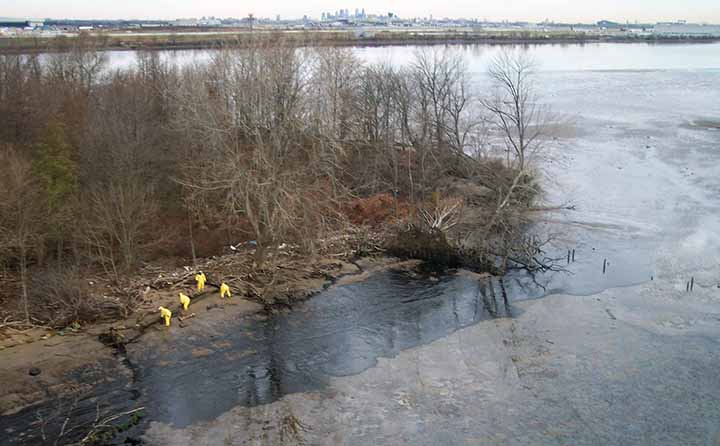 Because of this accident, the response community has become more prepared and new legislation was passed (President Signs Oil Spill Legislation). It was historic at the time, and I was glad I had given a little piece to the success of the response. It's a thought that helps me be prepared for the next "Usual Notification" I will receive, whenever it comes. 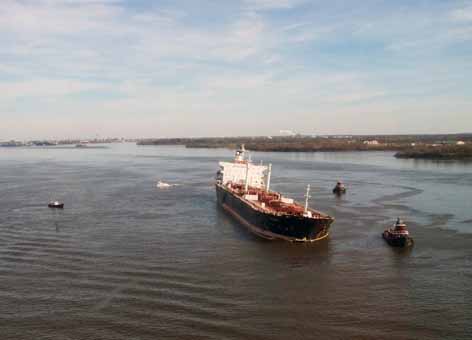 Tanker Athos I anchored in the Delaware River after it struck a submerged object and began leaking oil. (NOAA) 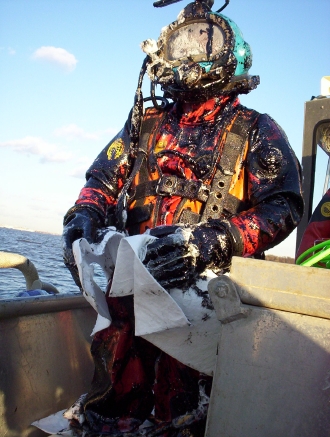 Commercial diver covered in oil after a bottom survey of the Delaware River. (U.S. Coast Guard)
Back to top