Opening up the Hudson River for Migrating Fish, One Dam at a Time

AUGUST 11, 2015 -- One wintry day near the pre-Civil War–era town of Stockport, New York, NOAA scientists Lisa Rosman and Carl Alderson carefully edged their way down the snowy banks of Claverack Creek. They pushed past the debris of a nearby maintenance yard, filled with old buses and cars and surrounded by junk covered in snow and ice. A roar of water could be heard just beyond this scene, tumbling out from the remains of a dam. The dam was framed by an assortment of large natural boulders and scattered concrete masses, everything partially blanketed in a snowy white ruin. As the team surveyed this landscape, a seamless portrait of the Hudson River Valley emerged, making it easy to see how everything was connected. Cameras and video recorders, GPS units and notebooks came flying quickly in and out of warm pockets, with hands glad to be thrust back in after the duo collected the information they sought. The scientists were scouting this particular creek for features they had spotted in satellite imagery. The purpose? To locate, verify, and catalog blockages to fish movement and migration. ­­They could see that this crumbling structure had been much higher at one time. Something, likely a storm, had sheared off the top portion of the dam. Even with the breach, the damage did not allow the river to flow freely past the dam's base. So, the question for the team remained: Could migrating fish navigate past what was left of this dam? Additional research revealed more about this remnant from another time. The Van De Carr Dam once powered a 19th century paper mill and a mattress factory, part of the national transition to water power and the start of the industrial age. Today, however, NOAA has classified this dam as a barrier for fish trying to follow their instincts and migrate up this tributary of the Hudson River, as their parents and ancestors did before them. 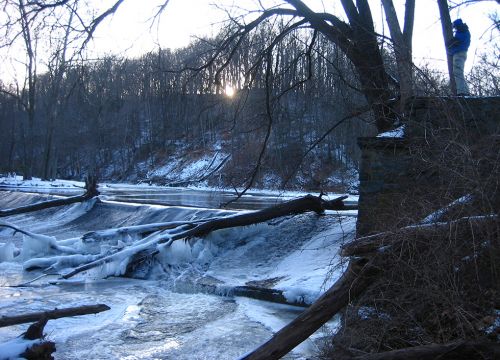 Water, both frozen and liquid, tumbles over the Orrs Mill Dam on Moodna Creek, a tributary of the Hudson River, in Cornwall, New York. NOAA scientists Lisa Rosman and Carl Alderson are investigating dams and other structures that are potentially preventing fish from migrating up these waterways. (NOAA)

Rosman and Alderson are investigating potential habitat restoration opportunities along 69 tributaries to the Hudson River estuary. The Hudson River is a federal Superfund site spanning almost 200 miles from Hudson Falls in the north to the Battery in New York City. Beginning in the late 1940s, two General Electric (GE) capacitor manufacturing plants in Hudson Falls and Fort Edward, New York, released industrial chemicals known as PCBs (polychlorinated biphenyls) into the Hudson River environment over several decades. The PCB pollution has contaminated Hudson River fish and wildlife, their prey, and their habitats. The investigation assesses the potential for removing dams and culverts that are preventing fish from migrating up and downstream within the Hudson River Valley. Removing abandoned dams and upgrading culverts will provide fish with access to habitat in tributaries of the Lower Hudson River, upstream of the river's tidal influence. Barrier after barrier, this scientific duo determines which dams on Hudson River tributaries still provide services, such as water supply, recreation, or hydroelectric power, and those which no longer serve any meaningful function. Back in the office, they enter the information collected in the field into a database that now includes more than 400 potential barriers to fish, both man-made and natural. Dams and improperly sized or installed culverts have prevented important migratory fish, such as American shad and river herring, from swimming further upstream to spawn, as well as reducing the passage of the historically far-reaching American eel. In addition, NOAA catalogs the rivers' natural barriers—steep gradients, rock ledges, waterfalls—to estimate the extent that most fish previously could travel upstream before the presence of dams. Through a combination of advanced digital mapping software and scouting trips such as the one to Claverack Creek, Alderson and Rosman are identifying potential fish restoration projects. These projects will help make up for the decades when people were either not allowed to fish or retain catches along portions of the Hudson River and were advised against eating its highly polluted fish.

Opening up Rivers and New Opportunities for Collaboration

Left: Debris clogs the passage of the brook beneath a stone bridge on Indian Brook near Cold Spring, New York. Removing barriers in these waterways will help open up habitat to migrating fish along the tributaries of the Hudson River. Right: A former mill building on Fishkill Creek, near Beacon, New York, was at one time powered by water shot through a raceway beneath the building. A man-made dam is located upstream of the photo some distance away. Natural ledges in this creek such as the one pictured here also form an impasse to the historical passage of migratory fish and diminish the ability of American eel to move further upstream. (NOAA)

The data Rosman and Alderson are collecting help support other programs as well. NOAA and other government agencies prioritize removing or updating the barriers that provide the best opportunities for habitat improvement and fish passage. Dams that are not candidates for removal may still benefit from structures such as fish ladders, rock ramps, or bypass channels designed to enhance fish passage over or around the dam. Already, their efforts have helped communicate the potential for habitat restoration in the region. In October 2014, they shared information about their database of fish barriers at a workshop co-hosted by New York State Department of Environmental Conservation’s (NYSDEC) water, dam safety, and estuary programs. Later, at an April 2015 summit in Poughkeepsie, New York, the Hudson River Estuary Program announced the official kick-off of a new grant program that will benefit the river and its migrating fish. The program will award $750,000 to restore tributaries of the Hudson River and improve their resilience (e.g., dam removal and culvert and bridge upgrades) and $800,000 for local stewardship planning. The grant announcement and collaboration among NOAA, NYSDEC, and several key stakeholders, including the Hudson River Estuary Program, The Nature Conservancy, and Scenic Hudson, signals an era of growing cooperation and interest in bringing back migrating fish to their historic habitats and improving the vitality of the Hudson River and its tributaries.