Orange Oil Is the New Black

JULY 6, 2015 -- Orange is a common color in oil spill response. Life jackets, rain gear, and the work vests worn by responders are often orange to make them easier to see. And don’t forget the bright orange U.S. Coast Guard helicopters that may be on scene. Floating booms are often orange for the same reason. But generally the oil they are responding to is black or another dark color. But recently we had an orange oil spill. No, the oil wasn't orange colored; it was actually the oil extracted from orange peels. It is a byproduct of orange juice manufacturing and used as a flavoring and in a variety of fragrances and household cleaners. On June 15, 2015, about 700 gallons of orange peel oil was spilled into a creek near the Passaic River, which flows into New York harbor. A large rain storm caused a wastewater pump to fail and water backed up into the facility producing the orange oil. The orange oil then was inadvertently pumped out of the facility into the creek. Crews managed to temporarily dam the creek using sheets of plywood, keeping most of the oil from reaching the river. The spill happened in East Hanover, New Jersey, oddly not far from the city of Orange, New Jersey, (named for King William III of England, also known as William of Orange). So why do we care about a seemingly harmless (and nice-smelling) product such as orange oil? Edible oils may be less toxic than crude oils, but spills of animal fats and vegetable oils can kill or injure wildlife. They also can end up suffocating aquatic life because microbes in the water take advantage of the temporary feast but in the process use up large amounts of the oxygen dissolved in water, leaving little oxygen for other aquatic creatures to use. This was the case when 1,400 tons of molasses were accidentally released into Honolulu Harbor in 2013, killing a number of fish. Back to the scenario near Orange, New Jersey: a major compound in orange oil is limonene, which in very high concentrations can be toxic to fish and freshwater plankton. Fortunately, U.S. Coast Guard personnel overseeing the response reported that the responders were able to use absorbent pads to quickly sop up the released oil, which remained far below toxic levels. Furthermore, any remaining orange oil would likely evaporate or disperse in the water over the course of several days to a couple weeks, leaving behind a sweet-smelling cleanup scene. 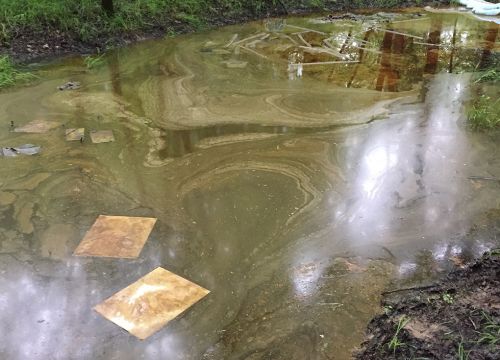 Even something as pleasant-smelling as orange peel oil can have potentially harmful effects on aquatic life. A view of the spill with some absorbent cleanup materials not far from Orange, New Jersey. (U.S. Coast Guard)
Back to top