On August 4 - 6, 2014, representatives from OR&R’s Assessment and Restoration Division collaborated with staff from the Office of National Marine Sanctuaries, the Office of Marine and Aviation Operations (OMAO), and the Oceanic and Atmospheric Research UAS Program (UASPO) in an exercise to evaluate Unmanned Aerial Systems (UAS) for oil spill response and damage assessment activities.

Participating with the three NOAA offices were partnering agencies United States Fish and Wildlife Service (USFWS), United States Air Force (USAF), California Department of Fish and Wildlife Office of Spill Prevention and Response (CDFW-OSPR), and industry representatives from Chevron, 2d3 and AeroVironment. The PUMA UAS was deployed offshore and in nearshore environments along the central California coast at Vandenberg Air Force Base.

The PUMA was launched in the offshore zone and flown above the NOAA R/V Shearwater in an area not far from oil platform Gail. Fluorescein dye was applied to the water to simulate an oil spill while PUMA overflights obtained geo-referenced images for estimating the simulated spill’s surface area and volume. Prior to the exercise ARD, NOAA National Marine Fisheries (NMFS), USFWS and California Coastal Commission (CCC) cooperatively completed an informal Section 7 consultation and concurred that the fluorescein dye application and operation of the PUMA system would not likely adversely affect endangered species and their habitats. Since the area is known to have high shipping traffic, the team also coordinated with OR&R’s ERD and the Coast Guard to identify the safest location to conduct operations.

The results were exciting, and the UAS successfully provided distinguishable photo and video images of dolphins, sea lions and a lurking Mola (Sunfish). Dye, simulating oil, was deployed in a location away from any observable animals and was distinct in the aerial images, as was an actual patch of floating oil that drifted by the Shearwater.

The PUMA UAS was also launched on shore and flown over nearshore kelp beds and offshore rocks with nesting birds. On the beach, the Puma filmed transects and quadrats with bird decoys, black fabric simulating oil, and wrack. Beach goers were simulated with groupings of people from the participating agencies. As the PUMA was flown over the beach, real-time video was streamed down to a remote ground control location where users were able to assess the quality of video and photos from the UAS to provide distinguishable measures of marine life, beach oiling and human use. In another successful opportunistic test, the videos were available in real time for processing and conversion to mosaicked geo-referenced images that were transferred via an in-field satellite wireless network and cellular network for loading direct into ERMA.

This effort was a rewarding exercise that required coordination across many agencies (typical in oil spill response and damage assessments) and confirmed the utility of Unmanned Aerial Systems for this type of work in the future. 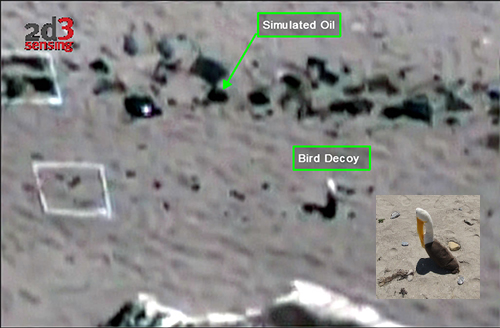 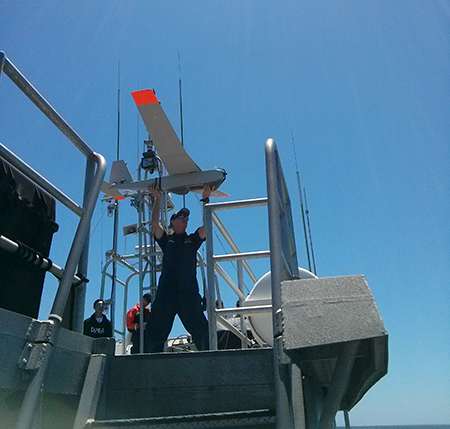