JANUARY 27, 2017--Caitlin Wessel is the new Gulf of Mexico Regional Coordinator for the NOAA Marine Debris Program, based at the Disaster Response Center (DRC) in Mobile, AL.

She joined the Marine Debris Team in September and is working with government, academic, and non-profit partners around the Gulf of Mexico to investigate and address marine debris on a regional scale.

Caitlin has a broad background in both education and research. Born and raised in Mars, Pennsylvania just north of Pittsburgh, Caitlin received a BS in Education from the University of Pittsburgh and taught high school sciences at Silver Bluff High School in Aiken, SC, after graduation. After two years, Caitlin headed back to the coast where she taught at a youth home for troubled teens and attended Coastal Carolina University completing a MS in Coastal, Marine, and Wetland Studies, focused on restoration work.

Currently, Caitlin lives and works in the Gulf of Mexico and is finishing up her PhD in Marine Sciences from the University of South Alabama and the Dauphin Island Sea Lab, researching the abundance, distribution, and impacts of marine debris in the northern Gulf of Mexico. She stumbled onto the topic of marine debris quite by accident while taking seagrass cores just off a remote, uninhabited island in Louisiana and was immediately hooked.

In her downtime, Caitlin enjoys getting outside to scuba dive, kayak, or hike with her puppies. 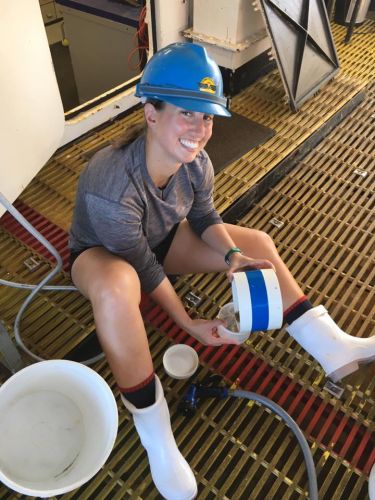 Caitlin Wessel sampling for microplastics in the Gulf of Mexico aboard the NOAA Ship Gordon Gunter. (NOAA)
Return to OR&R Weekly
Back to top