Over a Century after Texas Strikes Oil, Marsh Restoration Completed for an Old Refinery's Pollution

MAY 20, 2013 -- About five miles from the Texas-Louisiana border sits what was once the Gulf Oil Company's refinery. It's now owned by Valero, by way of Chevron. But this century-old refinery in Port Arthur, Texas, has been operating since a year after the famous discovery of oil at Spindletop in 1901, which came in the form of a more than 100-foot-high, nine-day-long oil gusher. Spindletop is the salt dome oil field that sparked the oil boom in Texas, ushering in the exploration of oil in the region that has persisted to this day. It also paved the way for oil to become a significant energy source. 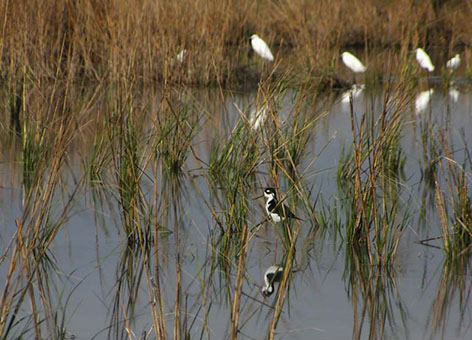 A black-necked Stilt and Snowy Egrets in the restored wetland habitat. (Photo provided courtesy of Chevron.)

Oil Boom not Necessarily a Boon

With the oil boom came a number of hazardous substances to the former Gulf Oil refinery site and its surrounding areas. Historically, the refinery produced jet fuel, gasoline, petrochemicals, and a variety of other oil and chemical products. But this took a toll on the site's soil, water, and aquatic habitats. Ecological risk assessment studies led by the state of Texas have revealed the presence of polycyclic aromatic hydrocarbons (PAHs, a toxic component of oil), lead, zinc, nickel, cadmium, copper, and more in the water and sediment on the site. In 2004, NOAA, U.S. Fish and Wildlife Service, and the Texas natural resource trustees, working cooperatively with Chevron, determined that the public was owed ecological restoration for the contaminated surface water, soil, and sediments at the former Gulf Oil refinery [PDF]. Our assessment showed that we could accomplish this by constructing 83 acres of tidal wetland and 30 acres of coastal wet prairie and improving 1,332 acres of coastal wetlands via new water control structures in the Sabine Lake/Neches River basin. Based on this information, the natural resource trustees negotiated with Chevron (which assumed the legal responsibility of the former Gulf Oil site) a $4.4 million settlement of state and federal natural resource damage claims related to the site. This money would go toward implementing the environmental restoration. The settlement included three projects meant to restore coastal habitat to compensate the public for natural resources lost or injured by historical contamination from the refinery. Two of the projects involved restoring a natural hydrology to coastal wetlands by installing water flow enhancement structures and berms. The third project aimed to create intertidal estuarine marsh and coastal wet prairie by using nearby dredge material. These projects were a significant undertaking for Chevron and their contractors. They involved several different restoration techniques, some of which had to be modified in the middle of construction to adapt to changes in the field. 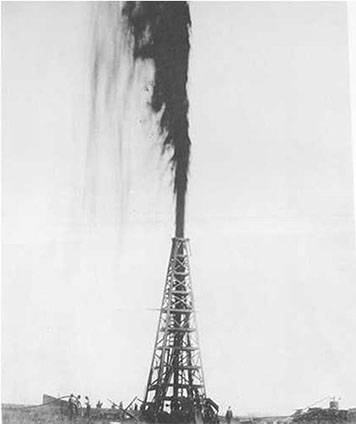 On January 10, 1910, the famous Lucas gusher, named after the persistent oil explorer who drilled the well, struck oil at Spindletop Hill in a geyser that launched more than 100 feet in the air for nine days. This kicked off the Texas oil boom and was the impetus for opening the nearby Gulf Oil Company refinery. (John Trost)

Building Marsh out of Mud Pancakes

In 2002, Chevron set up a pilot project to determine the feasibility of constructing marsh habitat by placing local dredge material into open-water habitat. The resulting constructed marsh terrace was able to maintain the necessary elevation for native marsh vegetation to take root. 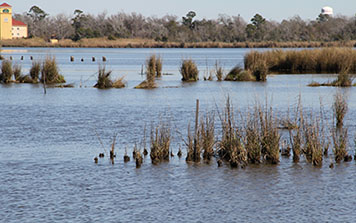 Based on the successful pilot, the full-scale project for building marsh planned to mix dredge material with water, forming slurry that could then be pumped into open water to form mounds and terraces. Once they reached the suitable elevation, the mounds and terraces would later be planted with native marsh grasses. On the other hand, the coastal wet prairie would be constructed by removing dredged sediment to lower the elevation and make it suitable for supporting vegetation found in that habitat type. Full-scale construction for the projects kicked off in 2007. This timeline was pushed back a few years from the pilot project because in 2005 Hurricanes Katrina and Rita increased demand for the heavy equipment used in the marsh environment and also damaged habitat and vegetation at the project site. 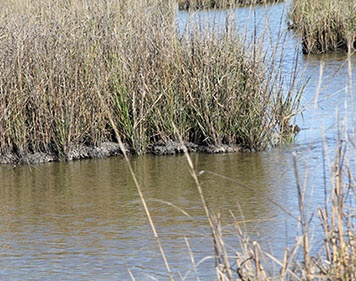 Another challenge came after Chevron pumped the dredged sediments into the open water to create marsh mounds. Unlike during the pilot project, when the pumped-in sediment stacked well, the sediment used in the marsh construction spread out and formed pancakes instead of the desired mounds. To prevent the sediment from spreading, the restoration team tried changing the pump's spout, but spraying the dredge slurry into mounds was still a challenge. The mounds became mudflats. Changing the construction technique again, they next pumped in dredged sediments and then excavated mounds and terraces. This technique had greater success, but in the end, it was still necessary to pump in additional sediment to some areas to achieve the necessary elevations. Because the team was using so much more dredge material than originally planned, they had to find an alternative sediment source from a nearby canal. If they continued taking sediment from the original source, they would have risked lowering the elevation of the area, which was adjacent to the coastal wet prairie and could affect its hydrology. 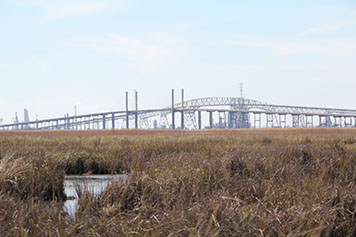 Despite a number of setbacks, the restoration projects were finished in 2009 and after a monitoring period, the trustees certified them as successfully completed in February of 2013. These projects will improve the fish and shellfish abundance in this part of southeast Texas, provide habitat for wildlife and fish, increase recreational opportunities for bird watching and fishing, and improve the habitat for waterfowl (a benefit for hunters). The area is also highly visible for anyone driving south through the Beaumont-Port Arthur area. Just look out your window as you cross the Neches River and you'll see the marsh mounds, coastal wet prairie, and maybe even a few Snowy Egrets on display.