PCBs: Why Are Banned Chemicals Still Hurting the Environment Today?

FEB. 7, 2014 — For the United States, the 20th century was an exciting time of innovation in industry and advances in technology. We were manufacturing items such as cars, refrigerators, and televisions, along with the many oils, dyes, and widgets that went with them. Sometimes, however, technology races ahead of responsibility, and human health and the environment can suffer as a result. This is certainly the case for the toxic compounds known as polychlorinated biphenyls, or PCBs. 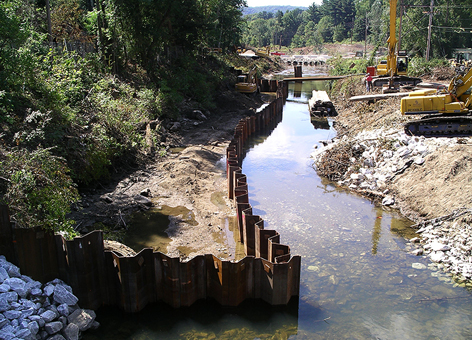 PCB contamination is high in the Housatonic River and New Bedford Harbor in Massachusetts. How high? The "highest concentrations of PCBs ever documented in a marine environment." (U.S. Fish and Wildlife Service)

From the 1920s until they were banned in 1979, the U.S. produced an estimated 1.5 billion pounds of these industrial chemicals. They were used in a variety of manufacturing processes, particularly for electrical parts, across the country. Wastes containing PCBs were often improperly stored or disposed of or even directly discharged into soils, rivers, wetlands, and the ocean. Unfortunately, the legacy of PCBs for humans, birds, fish, wildlife, and habitat has been a lasting one. As NOAA's National Ocean Service notes:

Even with discontinued use, PCBs, or polychlorinated biphenyls, are still present in the environment today because they do not breakdown quickly. The amount of time that it takes chemicals such as PCBs to breakdown naturally depends on their size, structure, and chemical composition. It can take years to remove these chemicals from the environment and that is why they are still present decades after they have been banned.

PCBs are hazardous even at very low levels. When fish and wildlife are exposed to them, this group of highly toxic compounds can travel up the food chain, eventually accumulating in their tissues, becoming a threat to human health if eaten. What happens after animals are exposed to PCBs? According to a NOAA, U.S. Fish and Wildlife Service, and State of New York report [PDF], PCBs are known to cause: 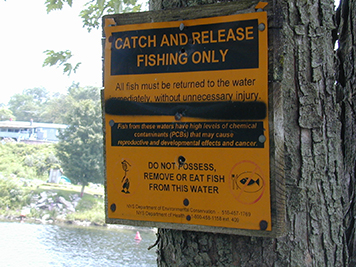 According to a NOAA, U.S. Fish and Wildlife Service, and State of New York report on the Hudson River, "New York State's 'eat none' advisory and the restriction on taking fish for this section of the Upper Hudson has been in place for 36 years." (NOAA)

Because of these impacts, NOAA’s Damage Assessment, Remediation, and Restoration Program (DARRP) works on a number of damage assessment cases to restore the environmental injuries of PCBs. Some notable examples include:

Yet the list could go on—fish and birds off the southern California coast, fish and waterfowl in Wisconsin's Sheboygan River, a harbor in Massachusetts with the "highest concentrations of PCBs ever documented in a marine environment." These and other chemical pollutants remain a challenge but also a lesson for taking care of the resources we have now. While PCBs will continue to be a threat to human and environmental health, NOAA and our partners are working hard to restore the damage done and protect people and nature from future impacts.