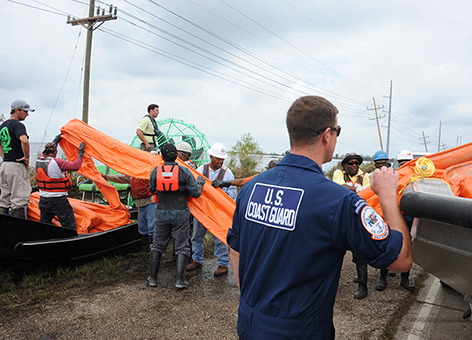 A Coast Guard responder oversees the loading of boom onto a response airboat in Louisiana following Hurricane Isaac, Sept. 2, 2012. A team of responders was dispatched to place the boom around a reported oil leak to protect environmentally sensitive marshlands. The NOAA Disaster Response Center provides NOAA support during disasters in the Gulf such as this. (U.S. Coast Guard)

AUGUST 8, 2013 -- Join the National Ocean Service in a recent podcast as they visit the NOAA Disaster Response Center in Mobile, Ala., to learn how this facility is equipped to serve as the central hub for environmental disaster coordination and response in the region.

Director Charlie Henry guides listeners on a virtual tour of the NOAA Disaster Response Center and its value to the Gulf of Mexico and to the people working to prepare for and respond to natural and manmade disasters there.

"I think the unique thing about the Disaster Response Center is that it's a concept of pulling people together from different groups with the common goal in trying to build a better response community and a better response posture," Henry says, "so that the end result is that we have more resiliency and less impact from storms, and that's our ultimate goal: to build a resilient community that when there's a threat from hurricanes or other disasters, that we're prepared for and that we weather those storms and that we recover with the least amount of threat to the public and to property and the environment."

Listen to the full interview with Henry on the National Ocean Service website.