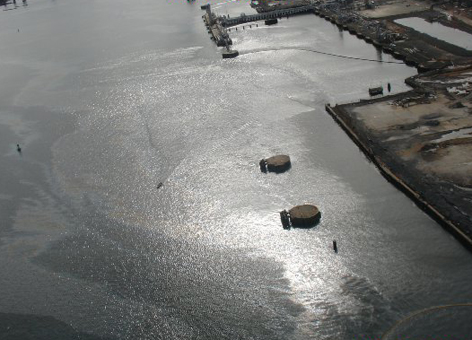 Oil sheen is visible on the waters of Arthur Kill on the border of New Jersey and New York in the wake of Hurricane Sandy. (NOAA)

UPDATED NOV. 15, 2012 — Hurricane Sandy's extreme weather conditions—80 to 90 mph winds and sea levels more than 14 feet above normal—spread oil, hazardous materials, and debris across waterways and industrial port areas along the Mid Atlantic. NOAA's Office of Response and Restoration is working with the U.S. Coast Guard and affected facilities to reduce the impacts of this pollution in coastal New York and New Jersey.

We have several Scientific Support Coordinators and information management specialists on scene at the incident command post on Staten Island, N.Y.

Since the pollution response began, Scientific Support Coordinators have been serving as aerial observers on Coast Guard helicopters to survey oil on the water surface particularly in the area of Arthur Kill, N.J./N.Y., in order to locate oil which could be recovered or might be having an environmental impact.

In addition, the response support staff have visited the sites and facilities affected by the spills to survey the extent of oiling and debris and to offer scientific counsel on environmental trade-off decisions for oil spill containment and cleanup efforts.

One of the challenges facing communities after a devastating weather event is information management. One tool we have developed for this purpose is ERMA, an online mapping tool which integrates and synthesizes various types of environmental, geographic, and operational data. This provides a central information hub for all individuals involved in an incident, improves communication and coordination among responders, and supplies resource managers with the information necessary to make faster and better informed decisions.

ERMA has now been adopted as the official common operational platform for the Hurricane Sandy pollution response, and we have sent additional GIS specialists to the command post.

Species and Habitats at Risk

The most sensitive habitats in the area are salt marshes, which are often highly productive and are important wildlife habitat and nursery areas for fish and shellfish. Though thin sheens contain little oil, wind and high water levels after the storm could push the diesel deep into the marsh, where it could persist and contaminate sediments. Because marshes are damaged easily during cleanup operations, spill response actions will have to take into account all of these considerations.

In addition, diesel spills can kill the many small invertebrates at the base of the food chain which live in tidal flats and salt marshes if they are exposed to a high enough concentration. Resident marsh fishes, which include bay anchovy, killifish, and silversides, are the fish most at risk because they are the least mobile and occupy shallow habitats. Many species of heron nest in the nearby inland marshes, some of the last remaining marshlands in Staten Island. Swimming and diving birds, such as Canada geese and cormorants, are also vulnerable to having their feathers coated by the floating oil, and all waterfowl have the potential to consume oil while feeding.

Based on the risks to species and habitats from both oil and cleanup, we weigh the science carefully before making spill response recommendations to the Coast Guard. 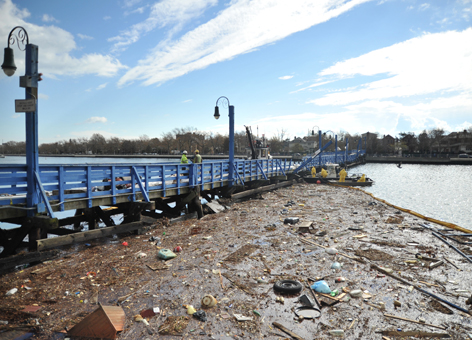 Because no two oils are alike, we train aerial observers to evaluate the character and extent of oil spilled on the water. NOAA performs these aerial surveys, or overflights, of spilled oil like in Arthur Kill to determine the status of the oil's source and to track where wind and waves are moving spilled oil while also weathering it. The movement of wind and waves, along with sunlight, works to break down oil into its chemical components. This changes the appearance, size, and location of oil, and in return, can change how animals and plants interact with the oil.

When spilled on water, diesel oil spreads very quickly to a thin film. However, diesel has high levels of toxic components which dissolve fairly readily into the water column, posing threats to the organisms living there. Biodiesel can coat animals that come into contact with it, but it breaks down up to four times more quickly than conventional diesel. At the same time, this biodegradation could cause potential fish kills by using up large amounts of oxygen in the water, especially in shallow areas.

Look for photos, maps, and updates on pollution-related response efforts at IncidentNews and in the recent (Nov. 3) Coast Guard press release.

Check the Superstorm Sandy CrisisMap for aggregated information from NOAA, FEMA, and other sources on weather alerts and observations; storm surge and flood water data; aerial damage assessment imagery; and the locations of power outages, food and gas in New Jersey, and emergency shelters.