Protecting, Restoring, and Celebrating Estuaries: Where Salt and Freshwater Meet

SEPTEMBER 22, 2014 — As the light, fresh waters of rivers rush into the salty waters of the sea, some incredible things can happen. As these two types of waters meet and mix, creating habitats known as estuaries, they also circulate nutrients, sediments, and oxygen. This mixing creates fertile waters for an array of life, from mangroves and salt-tolerant marsh grasses to oysters, salmon, and migrating birds. These productive areas also attract humans, who bring fishing, industry, and shipping along with them. All of this activity along estuaries means they are often the site of oil spills and chemical releases. We at NOAA's Office of Response and Restoration often find ourselves working in estuaries, trying to minimize the impacts of oil spills and hazardous waste sites on these important habitats. 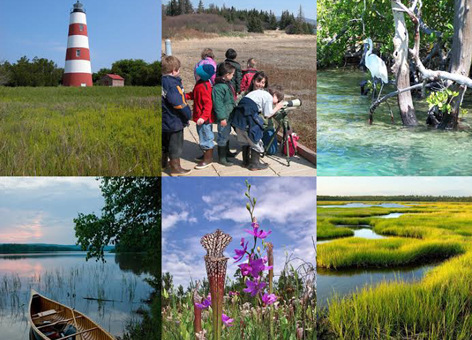 A Time to Celebrate Where Rivers Meet the Sea

September 20–27, 2014 is National Estuaries Week. This year 11 states and the District of Columbia have published a proclamation recognizing the importance of estuaries. To celebrate these critical habitats, Restore America's Estuaries member organizations, NOAA’s National Estuarine Research Reserve System, and EPA’s National Estuary Program are organizing special events such as beach cleanups, hikes, canoe and kayak trips, cruises, and workshops across the nation. Find an Estuary Week event near you. You and your family and friends can take a personal stake in looking out for the health and well-being of estuaries by doing these simple things to protect these fragile ecosystems.

How We Are Protecting and Restoring Estuaries

You may be scratching your head wondering whether you know of any estuaries, but you don’t need to go far to find some famous estuaries. The Chesapeake Bay and Delaware Bay are on the east coast, the Mississippi River Delta in the Gulf of Mexico, and San Francisco Bay and Washington’s Puget Sound represent some notable estuarine ecosystems on the west coast. Take a closer look at some of our work on marine pollution in these important estuaries.

Chesapeake Bay: NOAA has been working with the U.S. Environmental Protection Agency and Department of Defense on cleaning up and restoring a number of contaminated military facilities around the Chesapeake Bay. Because these Superfund sites are on federal property, we have to take a slightly different approach than usual and are trying to work restoration principles into the cleanup process as early as possible.

Delaware Bay: Our office has responded to a number of oil spills in and adjacent to Delaware Bay, including the Athos oil spill on the Delaware River in 2004. As a result, we are working on implementing several restoration projects around the Delaware Bay, which range from creating oyster reefs to restoring marshes, meadows, and grasslands.

Puget Sound: For Commencement Bay, many of the waterways leading into it—which provide habitat for salmon, steelhead, and other fish—have been polluted by industrial and commercial activities in this harbor for Tacoma, Washington. NOAA and other federal, state, and tribal partners have been working for decades to address the contamination and restore damaged habitat, which involves taking an innovative approach to maintaining restoration sites in the Bay. Further north in Puget Sound, NOAA and our partners have worked with the airplane manufacturer Boeing to restore habitat for fish, shorebirds, and wildlife harmed by historical industrial activities on the Lower Duwamish River, a heavily used urban river in Seattle. Young Puget Sound Chinook salmon and Steelhead have to spend time in this part of the river, which is a Superfund Site, as they transition from the river’s freshwater to the saltwater of the Puget Sound. Creating more welcoming habitat for these fish gives them places to find food and escape from predators.

San Francisco Bay: In 2007 the M/V Cosco Busan crashed into the Bay Bridge and spilled 53,000 gallons of thick fuel oil into California’s San Francisco Bay. Our response staff conducted aerial surveys of the oil, modeled the path of the spill, and assessed the impacts to the shoreline. Working with our partners, we also evaluated the impacts to fish, wildlife, and habitats, and determined the amount of restoration needed to make up for the oil spill. Today we are using special buoys to plant eelgrass in the Bay as one of the spill’s restoration projects