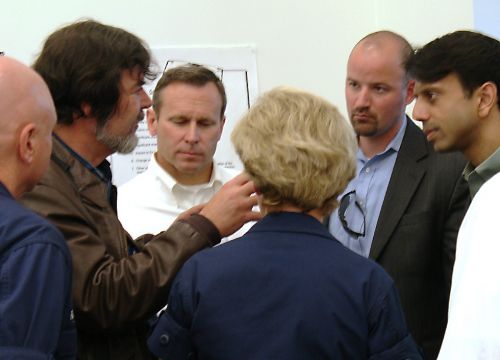 NOAA's Charlie Henry (second from left) discusses details of the response in the early days of the Deepwater Horizon oil spill with Louisiana Governor Bobby Jindal (right) and other key members of the response. (NOAA)

This is the sixth in a series of stories over the coming weeks looking at various topics related to the response, the Natural Resource Damage Assessment science, restoration efforts, and the future of the Gulf of Mexico.

He told me there was an explosion and fire aboard the drilling platform Deepwater Horizon, 50 miles offshore of Louisiana in the Gulf of Mexico.

At this point, there were far more unknowns than facts. What we did know was that the rig had been evacuated and the primary response efforts were focused on rescuing the 126 crewmen still on the rig. Early reports said a fire continued to burn, but we didn't know then if it was due to a well blowout situation or a fire from fuel on the vessel. 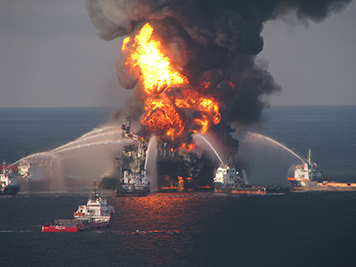 The Deepwater Horizon incident claimed the lives of 11 rig workers and released millions of barrels of oil into the Gulf of Mexico. (U.S. Coast Guard)

Waking up to an Emergency

I replied that I would start working up an initial oil spill trajectory analysis (which you can see represented on this map [PDF]) and then drive to the Coast Guard office in Morgan City, Louisiana. As the NOAA Scientific Support Coordinator for the western Gulf of Mexico, my role at the time was to serve as a science adviser to the U.S. Coast Guard on the core team responding to spills.

The only thing worse than being woken up in the middle of the night, is calling others and waking them up. My first call was to my colleague Glen Watabayashi, an experienced oceanographer and modeler with NOAA's Office of Response and Restoration, located back in our Seattle spill response "war room." Assessing the ocean currents and wind predictions for the area around the burning rig would provide a foundation for both a prediction of any oil’s path on the surface and might even contribute to the search and rescue activities for missing survivors.

This information soon would assist those people making important response decisions. For everyone that morning, oil pollution some 50 miles offshore was less of a priority than saving lives. If my memory serves, there were more than 60 crew unaccounted for when I was first notified. I could do little else at that point but dress and drive to the Coast Guard office.

It was still dark when I arrived. Coast Guard search and rescue operations continued, joined by "Good Samaritan" vessels in the area. Photos of the burning Deepwater Horizon rig illuminating the dark night were trickling into the command post.

The number of missing crew members continued to drop that morning and into the day, until the number reached 11—and stopped. Those 11 men who died that night were primarily the crew operating the well at the time of the explosion. When the Deepwater Horizon rig rolled to its side and sank nearly a mile to the bottom of the Gulf of Mexico two days after the explosion, those crewmen were still aboard.

After the explosion, the only thing holding the Deepwater Horizon in place was the riser and drill pipe connection between the floating platform and the wellhead some 5,000 feet below the ocean surface. During the first two days, the released oil and gas were mostly burning at the sea surface.

When the rig sank, the situation began to change—but deceivingly at first. Remotely operated vehicle (ROV) surveys found that fractures in the riser pipe created when the vessel sank were releasing oil and gas. Released under the high pressure of the well and at extreme ocean depth, this oil and gas became a cloudy plume of oil droplets and gas bubbles. The larger droplets of oil rose to the ocean surface in four to six hours, the smaller droplets might take a day or longer, and the smallest droplets never reached the surface.

As a result, what we saw of the oil at the surface grew slowly during the first couple days. At first, nobody knew how much oil was actually coming from the twisted, bent riser and pipe, but within a few days the amount of oil visible on the water provided evidence that it was a lot of oil.

Enduring a Spill Unlike any Other 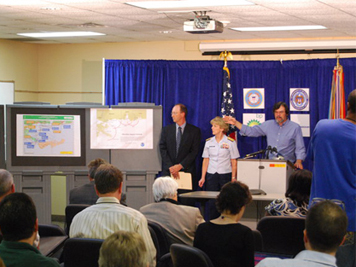 On April 29, 2010, at a press conference during the Deepwater Horizon oil spill, NOAA’s Scientific Support Coordinator Charlie Henry explained a map of where spilled oil was predicted to spread in the Gulf of Mexico. To the left of Henry is Rear Admiral Mary Landry, U.S. Coast Guard. (NOAA)

Many of the NOAA team responded at the scene of both spills, and for us, the unusual length and high stress of such extended spill responses become personal. Your normal family and life is in part replaced by the NOAA family, as you work long hours far from home and often share supper with your colleagues in the evenings, helping offset some of the difficulties encountered.

Most oil spill–related emergencies are over in a matter of days, and few receive more than a paragraph in the local newspaper. This incident was different. The magnitude and extent of the Deepwater Horizon response reached from the Gulf of Mexico to Washington, DC, and eyes were on it from across the nation and world.

The video feed of the gushing wellhead which was in the corner of many TV channels was a constant and painful reminder that oil was still spilling into the Gulf despite the efforts of a huge and growing response. As oil spill responders and stewards of our marine resources, we were just as frustrated.

NOAA's primary role in spill response is science that supports decision making. Managing such a major science response seemed at times just as daunting as the unfettered flow of oil from the seafloor. Research cruises that normally take years to plan were launched in days. A new generation of oil research began seemingly overnight. And my colleagues and I remained in emergency mode for weeks on end.

About six weeks into the spill, I did sleep in one Saturday morning. Normally, I would leave the house around 5:15 a.m. to make a 6:00 a.m. briefing.

My wife woke me in a panic, saying, "Honey, you must have over slept." I answered, "No, I took the morning off on purpose." She smiled, "You remembered today was our anniversary."

To be honest, I hadn't. I was just in need of a few extra hours of sleep, but sometimes you just get lucky. It was nice to have those few extra hours with my wife before returning to what seemed like the endless challenges and stresses of an oil spill I know my NOAA colleagues and I will never forget.

By Charlie Henry of NOAA's Office of Response and Restoration and Director of the NOAA Gulf of Mexico Disaster Response Center.