Recipes for Disaster: Cleaning up After Food Spills 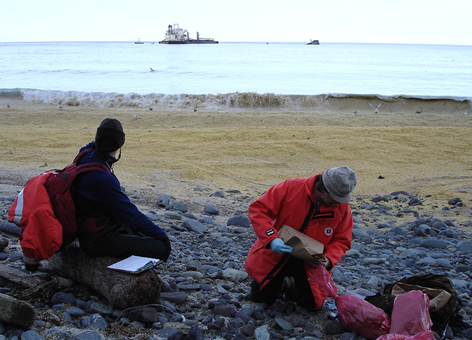 Members of the U.S. Fish and Wildlife Service collected bird carcass on January 6, 2005 on a beach littered with soybeans. The wreck of the Selendang Ayu is visible in the background. (Unified Command)

NOVEMBER 26, 2013 -- At a holiday feast like Thanksgiving, something is sure to be spilled: gravy, cranberry sauce, salt, and even more tragically, sometimes oil.

For those of us in NOAA who deal with the effects of spills every day of the year, we'll be grateful if there aren't any major spills of these items, edible or otherwise, this Thanksgiving. 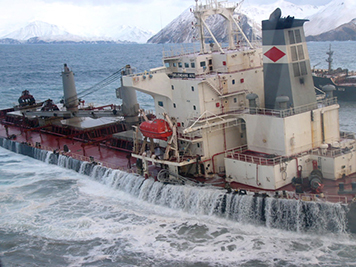 Off the coast of Unalaska Island, the floundering M/V Selendang Ayu broke in two, releasing its fuel and cargo of soybeans. The other half of the ship is visible in the background. (Unified Command)

During a large storm on December 8, 2004, the cargo ship M/V Selendang Ayu lost power and ran aground just off the coast of Alaska's remote Aleutian Island of Unalaska, approximately 25 miles southwest of Dutch Harbor.

It was in these chilly waters that the ship broke in two and literally spilled the beans—about 60,000 tons of soybeans—along with 337,000 gallons of oil. The beans and most of the oil were washed onto the island's rocky beaches, coating miles of shoreline.

In the aftermath of the spill, NOAA's Office of Response and Restoration helped conduct shoreline surveys before and after cleanup, made cleanup recommendations, and was involved in assessing damage to natural resources and planning restoration. While spill responders labored to remove oil from the beaches, they left the tons of soybeans to rot and disperse naturally.

An unfortunate side effect of this, however, was that the decomposition used up oxygen in the water, similar to what happened when molasses spilled in Hawaii's Honolulu Harbor in September 2013. This caused low oxygen levels and impacts to marine invertebrates such as shellfish in the intertidal zone. The seagulls took care of the invertebrates, but there are few natural predators of soybeans in the surf of the Aleutian Islands. At one point, there was a concern that the soybeans could begin sprouting in the moist conditions, but that was never observed, and they continued decomposing over the next year and a half. (View more photos from the wreck on IncidentNews.) 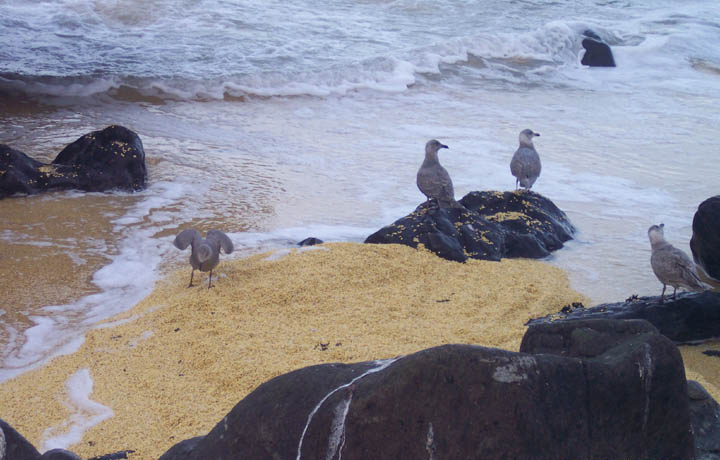 Seagulls peck for food among the soybeans released from the wreck of the Selendang Ayu, Dec. 28, 2004. (NOAA)

Coconut oil, while popular with some bakers, is less popular with spill responders. On February 11, 1986, NOAA responded to the mess that followed when a ship carrying 85,000 gallons of coconut oil was struck by a tug boat crossing the Kill Van Kull, a tidal strait separating New York's Staten Island from Bayonne, N.J. The stricken Dua Mar released all of its coconutty cargo into the strait.

NOAA provided the U.S. Coast Guard with a trajectory of where the oil would go, along with properties of coconut oil (it solidifies at temperatures below 76 degrees Fahrenheit) and an analysis of potential environmental impacts to nearby animals, plants, and habitats. Because it was winter, the coconut oil solidified upon mixing with the water and washed onto structures along the shore. Cleanup efforts involved pitchforks and shovels but were complete after several weeks. 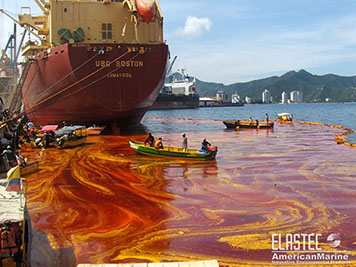 A palm oil spill in a port off of Colombia in 2008. (Elastec/All rights reserved)

A mere month after coconut oil coated the waters off Staten Island, N.Y., Proctor and Gamble reported a spill of 50 gallons of palm kernel oil nearby. The oil entered a line from one of their facilities to a tug boat, which eventually leaked it out the exhaust drain into the tidal strait known as Arthur Kill.

In this case, NOAA advised that the palm kernel oil would not solidify but instead remain a light oil floating on the water's surface.

This vegetable oil is not the same as what is commonly known simply as "palm oil" (that comes from the palm fruits rather than the palm seed). Still, both types of palm oils and other vegetable oils have the potential to harm species that frequent the surface of the water, usually via smothering, suffocating, or removing the waterproofing abilities of feathers or fur.

Yes, butter. It can be more than just a hazard to your arteries, as 70 firefighters in Madison, Wisc., learned in the eight days that followed the Great Butter Fire of May 3, 1991. 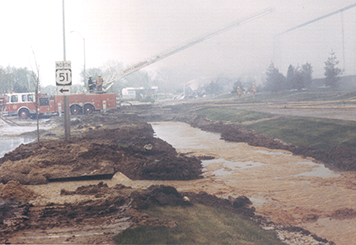 Firefighters in Madison County, Wisc., had to deal with 16 million pounds of butter melting and flowing out of the burning refrigerated warehouse. The butter is visible here in the dug-out channels. (Wisconsin Department of Natural Resources)

A four-alarm blaze erupted at the cold-storage facilities of the Central Storage and Warehouse Company. The extreme heat melted 16 million pounds of butter along with lard and cheese stored in the warehouses, creating a grease fire and releasing a stream of melted butter into surrounding roadways and ditches and threatening nearby Starkweather Creek and Lake Monona.

At first, responders tried to absorb the grease using six truckloads of sand. Next, engineers at the Wisconsin Department of Natural Resources successfully redirected the river of butter [PDF] away from the still-burning warehouse by digging channels and lagoons that led to lower ground. This method allowed the buttery liquid to form pools, keeping it away from the urban waterways that had recently received $1 million in environmental restoration.

The fire was extinguished on May 11 but had destroyed about 50 million pounds of food in the process. In an interesting turn of events, the ruined butter and lard were actually salvaged and processed into animal feed.

The brave firefighters of the City of Madison's Station Five, located just down the road from the warehouse, still commemorate this buttery and cheesy fire on their official station logo. 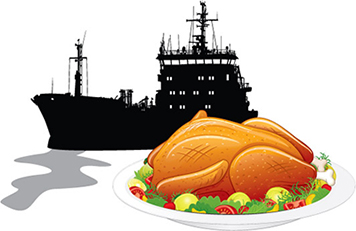 On behalf of NOAA, have a happy and spill-free Thanksgiving!