SEPTEMBER 30, 2015 -- Salmon, mink, bald eagles, and other wildlife should be lining up to claim a spot among the lush new habitat freshly built along Oregon's Willamette River. There, a few miles downstream from the heart of Portland, construction at the Alder Creek Restoration Project is coming to a close. Which means the reshaped riverbanks and restored wetlands are open for their new inhabitants to move in. This 52 acre project is the first habitat restoration effort for the Portland Harbor Superfund Site and has been implemented specifically to benefit fish and wildlife affected by years of industrial contamination in the harbor. Salmon, lamprey, osprey, bald eagle, mink, and others will now enjoy sandy beaches, native vegetation, and large pieces of wood to perch on or hide underneath. These features replace the saw mill, parking lots, and other structures present on the property before it was purchased by Wildlands, Inc. Chinook salmon and osprey have already been seen seeking refuge and searching for food in the newly constructed habitat. Wildlands is a business that intends to sell ecological "credits" from this restoration project. The credits that the Alder Creek project generates are available for purchase to resolve the liability of those who discharged oil or hazardous substances into Portland Harbor.

The Alder Creek restoration site on Oregon's Willamette River in June 2012, prior to restoration (left), and in September 2015, nearing completion (right). (Photo courtesy of Wildlands, Inc.)

Construction on the restoration site began in the summer of 2014. First, hundreds of thousands of yards of wood chips were removed from the site of a former saw mill and several buildings were demolished. A channel was excavated on the western portion of the site, which was continued through the eastern half of the site when construction resumed in 2015. View a time lapse video of channel construction on the Alder Creek site:

Also this year, efforts involved removing invasive vegetation, planting native vegetation, and installing large wood structures along the channel to create ideal places for young fish to rest, feed, and hide from predators. After a final breach of the earthen dam dividing the restoration site this September, water now flows across the newly restored area. Once additional planting is completed this winter, the project will officially be "open for business," although some entrepreneurial wildlife are already getting a head start. 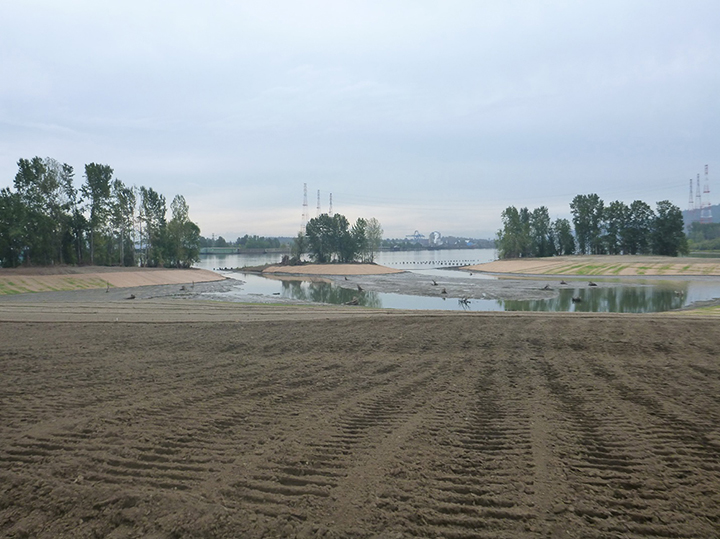 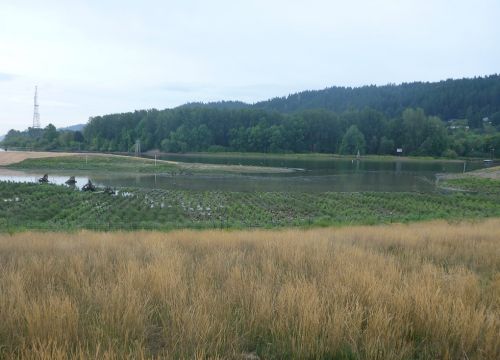 Habitat restored at Alder Creek in Oregon in 2014 was planted with native vegetation in 2015. Salmon and osprey have already been seen making themselves at home in the newly constructed habitat. (Photo courtesy of Wildlands, Inc.)
Back to top