Restoration Amid Hanford's Nuclear Waste and the Largest Environmental Cleanup in the U.S. 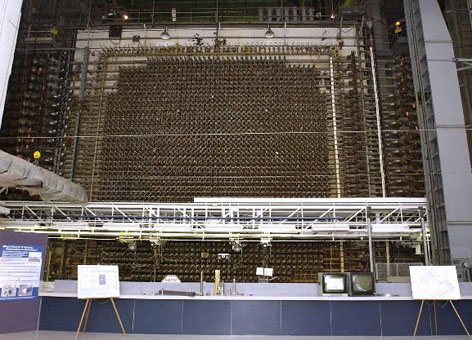 The front face of Hanford's B Reactor, where uranium fuel slugs were loaded into the reactor when it was operating. The reactor began operating in September 1944; it was shut down from 1946-1948, and then went back into service until 1968. (Dept. of Energy)

JUNE 15, 2012 — Recently NOAA's Office of Response and Restoration staff had the opportunity to tour the U.S. Department of Energy’s Hanford Nuclear Reservation, where NOAA is working on the Hanford Natural Resource Damage Assessment (NRDA). The goal of the Hanford damage assessment is to restore the natural resources affected by contamination from decades of nuclear defense activities at the Hanford Nuclear Site. Between 1944 and 1987, Hanford, located in eastern Washington state, produced plutonium for atomic weapons, starting with the "Fat Man" bomb dropped on Nagasaki in 1945.

During the Cold War years, the facilities grew to include nine nuclear reactors and associated processing plants. While producing plutonium for the U.S. defense program throughout the Cold War, billions of gallons and millions of tons of nuclear waste were generated, contaminating the ground around waste sites, the reactor and processing facility buildings, and groundwater. The site accounts for two-thirds of all the high-level radioactive waste in the entire country (by volume). There are 149 large eroding tanks filled with old nuclear waste that is in the process of being transferred into new tanks and eventually will be mixed with glass, a process called vitrification, for stability and permanent storage.

Since 1989, Hanford has been in cleanup mode and is the largest environmental cleanup in the U.S., employing about 11,000 people. Technicians work to mitigate contaminated groundwater before it reaches the Columbia River, which borders the site for 51 miles. They work on demolishing facilities, encasing ("cocooning") old reactors, and burying tons of waste material into huge pits that are lined to prevent contaminants from leaching into the soil. A new waste treatment plant is underway that will handle the vitrification process for the nuclear waste currently stored in tanks. The process of cleaning up is likely to continue for decades. 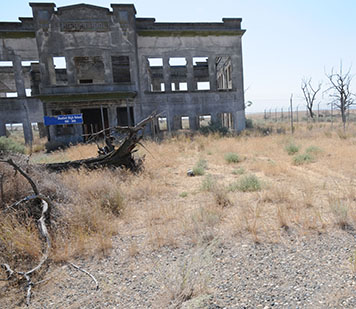 Hanford High School as it looks today. It is the only building left from the original town of Hanford, Wash. (Dept. of Energy)

While touring Hanford, it is easy to be struck by the enormity of the site as well as the magnitude of the problem and the range of cleanup activities in progress. The 586-square-mile area is a desert steppe ecosystem mostly covered in grasses and sagebrush, with very few trees. For the most part nothing breaks the horizon but the now sealed-up, tall, windowless, nuclear reactors. There are rolling hills and bluffs along the Columbia River, as well as the sites of two former small towns: Hanford, which gave the larger site its name, and White Bluffs. Both towns were evacuated permanently to make way for the top-secret nuclear project in 1943. All that is left of them is the burned-out cement shell of Hanford High School, outlines of where sidewalks and streets once were, and a bank that had been in downtown White Bluffs. Some former residents return in the summer for a picnic on the site of the vanished communities. For thousands of years before these two small towns existed, the area was inhabited by Native American people who gathered mussels, spear-fished salmon, and hunted the bison that previously roamed there.

The site is still important as a cultural meeting place and fall fishing ground for descendants of the Native people. Also of concern to the Native American people are the more than 600 archeological sites that have been discovered within the Hanford Nuclear site. Three Tribes, as well as representatives from the states of Washington and Oregon, the U.S. Departments of Energy and Interior, U.S. Fish and Wildlife, and NOAA are all involved in the environmental damage assessment. This collective group of trustees operates by consensus to replace lost or injured resources. They face diverse interests as they continue to collaborate throughout this process. A particular challenge of interest to NOAA is whether to initiate environmental restoration in the Columbia River before the full cleanup and damage assessment is complete. For more information on tours of the Hanford Nuclear Site, see the U.S. Department of Energy Hanford Site Tours. 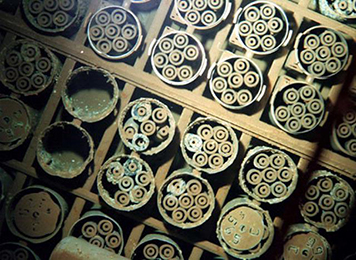 Spent fuel rods are stored underwater at the Hanford Nuclear Reservation. (Dept. of Energy)
Back to top