MAY 15, 2015 -- Santa Barbara Island is a world apart. Only one square mile in area, it is the smallest island in the Channel Islands National Park, located off the coast of Southern California and lone dwelling place for some unique species of animals and plants. The island has no land predators, which makes it a haven for seabirds. But human threats to seabirds, including industrial pollution and introduced species, have left their mark even on this haven. Seabird populations began dropping as pollution thinned their eggshells to the breaking point and exotic plants replaced their native nesting habitat. So imagine the excitement when biologists recently discovered the first ever nests of the rare and threatened Scripps's Murrelet among two areas restored on the island for their benefit. A petite, black-and-white seabird, the Scripps's Murrelet also is threatened by predators introduced to its breeding colonies and by oil spills. While Santa Barbara Island has the largest colony of Scripps's Murrelet in the United States, the State of California listed this bird as a threatened species in 2004 and it currently is a candidate for protection under the federal Endangered Species Act (under a previous name, Xantus's Murrelet).

Each spring, murrelets lay one or two eggs in crevices and burrows beneath Santa Barbara Island’s native shrubs. They need the structure and cover provided by native plant communities to protect their nests. Unfortunately, the native shrubs on Santa Barbara Island have been decimated for decades by introduced grazers. Ranchers used to graze sheep on the island, inadvertently bringing non-native plants with them. These and other grazers allowed the non-native plants to proliferate and prevent the few remaining patches of native vegetation from recolonizing the island. Since 2006, NOAA's Montrose Settlements Restoration Program has been restoring this habitat for murrelets and other seabirds on Santa Barbara Island, caring for the thousands of native plants they have placed along its dry slopes. Uncovering two nests in two different restoration plots this spring means the project has reached a major milestone. The older of the two restoration plots where eggs were found, Landing Cove was first planted with native shrubs in December 2008. It can take several years for the shrubs to mature enough to become suitable seabird nesting habitat. 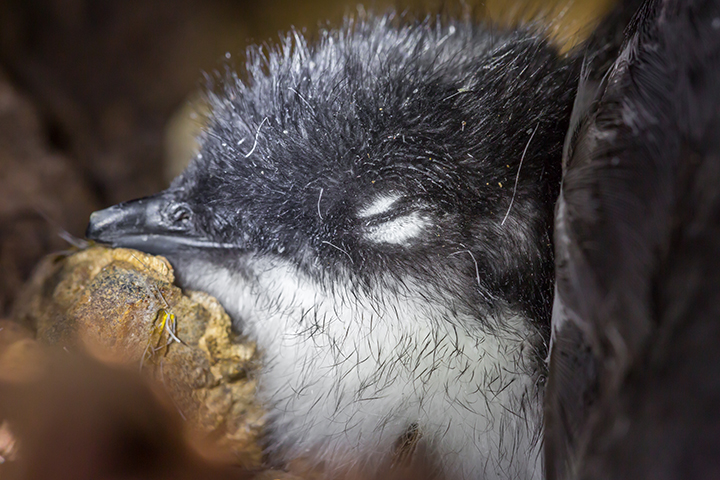 One egg was discovered there—on Earth Day, of all days—under a large native shrub planted during restoration efforts. Then, just this week, biologists confirmed that this egg had in fact hatched into a healthy murrelet chick. The second restored area, Beacon Hill, was planted more recently in 2012, giving biologists both a thrill and surprise to find a second murrelet nest under a native bush planted as part of the project. These nests are a testament to all of the hard work of scientists, restoration experts, and volunteers over the last ten years.

More Than One Way to Break an Egg

Funding to restore these threatened seabirds actually originates in events dating more than half a century earlier. From the late 1940s to the early 1970s, millions of pounds of the pesticide DDT and the industrial chemicals known as PCBs were discharged into ocean waters off the southern California coast. Most of the DDT originated from the Montrose Chemical Corporation manufacturing plant located in Torrance, California. DDT released into the ocean near California's Palos Verdes shelf spread through the food chain, eventually reaching seabirds and causing thinning in their eggs laid on the Channel Islands. The eggshells became so thin that when the adults would sit on the eggs to warm them they would break. In 2001, following a lengthy period of litigation, NOAA and other federal and state agencies reached a settlement with the responsible parties, establishing the Montrose Settlements Restoration Program. The program is working to restore populations of these rare seabirds and their habitat in the Channel Islands. 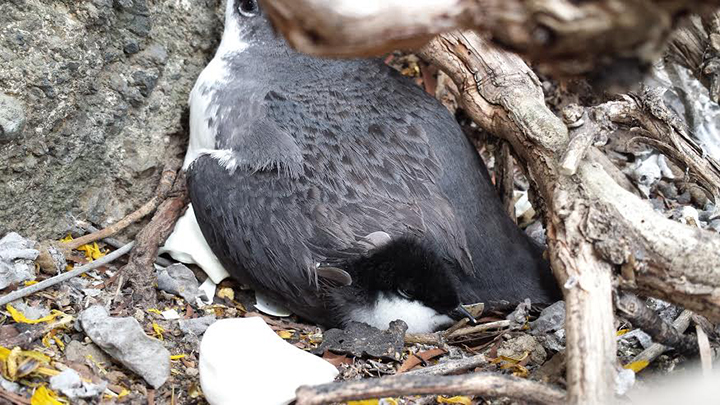 Scripps's Murrelets only breed on islands off California and Mexico, and their limited time on land creates a short window of opportunity for restoration efforts. (Gaby Keeler, California Institute of Environmental Studies)

A member of the auk family (which includes Puffins), Scripps's Murrelets take the term "seabird" to new limits. Murrelets spend almost their entire lives at sea, only coming to land to lay their eggs and hatch their young. Their chicks live up to being a seabird as well, spending only two days on the island before tumbling into the ocean to join their parents—leaving before they can even fly. These small birds only breed on islands off California and Mexico, and their limited time on land creates a short window of opportunity for restoration efforts. One of the goals of the Santa Barbara Island restoration project is to remove the non-native plants at selected areas identified as high quality nesting habitat. Biologists are restoring these areas by then planting native species with the help of lots of volunteers. This work is by no means easy. To date, over 30,000 plants have been put into the ground. All of the native plants in the project are grown from seed on the island, and growing a mature plant takes six to eight months. One of the challenges to growing these plants is that Santa Barbara is a desert island with no natural water source. All the water needed for raising the native plants must be transported by a National Park Service boat, and moved onto the island by crane in large 400 gallon tanks. A permanent nursery, which employs water-saving techniques, was constructed on the island to reduce the amount of water that needs to be sent to the island. Recently a drip irrigation system also has been installed at the restoration sites and is greatly improving plant survivorship while reducing water needs. The two nests found this spring are great signs that the restoration efforts are successful and helping to restore this endangered seabird and others to this unique island. We look forward to finding many more nests in the future. In the meantime, check out this video detailing our efforts to restore seabird habitat on Santa Barbara Island: 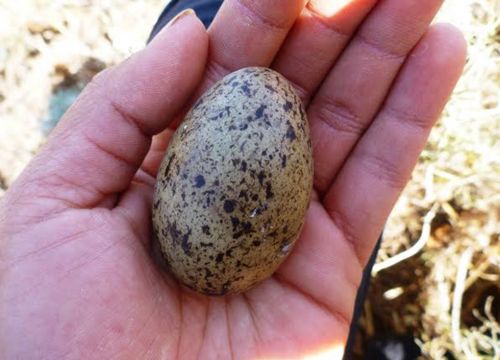 The first Scripps's Murrelet egg found in a restoration area on Santa Barbara Island. It hatched into a healthy chick in May 2015. (Gaby Keeler, California Institute of Environmental Studies) 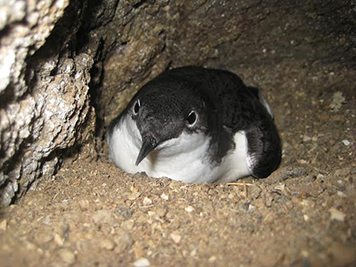 Scripps's Murrelets are a rare and threatened seabird that spends nearly its entire life out in the open ocean, except when it is nesting. (Sarah Thomsen, Simon Fraser University)
Back to top