Jan. 10, 2017 - The waters surrounding the Puerto Rico archipelago are known for the diversity and beauty of the coral reefs. Those reefs are also under great pressure from population density, land uses, and shipping traffic. On Oct. 27, 2009 the tanker Port Stewart grounded in coral reef habitat on the southeast coast of Puerto Rico near the entrance to Yabucoa Channel. The tanker was carrying 7 million gallons of oil. Local efforts freed the ship the same day it grounded without an oil spill but both the grounding and removal process caused extensive injury to the reef. Nearly 93 percent of Puerto Rico's coral reefs are rated as threatened, with 84 percent at high risk and among the most threatened in the Caribbean. The Port Stewart incident directly destroyed about 512 square meters (about 5,551 square feet) of the living coral reef. The injured habitat had a diverse community of soft corals (octocorals), sponges, and hard corals (scleractinian), including Staghorn coral (Acropora cervicornis), a threatened species under the Endangered Species Act. National Oceanic and Atmospheric Administration and the Puerto Rico Department of Natural and Environmental Resources officials have been working on a restoration plan for the area, which is now available for public comment. The period for comments ends Feb. 10, 2017. When a reef is injured it’s important to take emergency restoration actions to salvage as many of the corals as possible. Following the grounding work began to triage corals and plan emergency restoration which lasted through 2010. This included surveying and mapping the area affected by the incident and salvaging as many living corals as possible. Emergency restoration efforts are designed to meet most of the actions needed to revive the injured reef. In the Port Stewart case that included salvaging scleractinian corals, the hard reef-building animals that create skeletons under their skin. The skeletons are made from calcium carbonate and protect the coral animals and offer a base that other coral can attach themselves to, creating the reef community. The actions of emergency crews were able to save about 1,000 corals. Scientists have monitored injured reef for the past six years and consider restoration efforts successful. According to monitoring reports, survivorship of reattached corals is comparable to that of naturally occurring corals in the area. NOAA has the responsibility to conserve coral reef ecosystems under the Coral Reef Conservation Act of 2000. You can read more about how NOAA is working to restore damages reefs in the following articles: Restoring a Coral Reef Hit by Tanker in Puerto Rico NOAA and Partners Work Quickly to Save Corals Hit by Catamaran in Puerto Rico How NOAA Uses Coral Nurseries to Restore Damaged Reefs How to Restore a Damaged Coral Reef How Do Oil Spills Affect Coral Reefs? The Ship M/V Jireh Runs Aground a Coral Reef in Puerto Rico 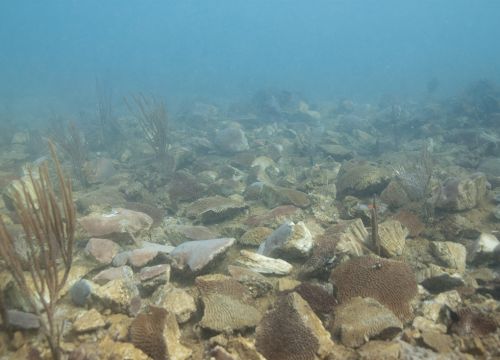 A coral cache location where fractured corals were protected prior to reef reattachment. NOAA 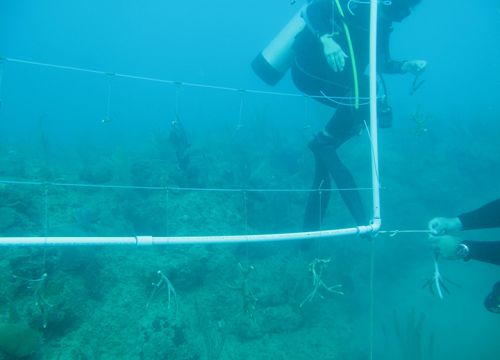 Broken corals were draped on a floating coral array frame in order to grow bigger. Divers attached Acropora coral fragments, one of many coral types affected by the grounding. NOAA
Back to top