Restoration: The Other Part of Spill Response

Feb. 14, 2017 - Typically, during an oil spill or chemical release, media images show emergency responders dressed in protective gear, skimming oil off the ocean’s surface or combing coastal beaches for oiled animals. As dramatic as they are, those images can leave the impression that cleaning up after a spill is the end of the story. Often the National Oceanic and Atmospheric Administration continues working on spills years after response efforts have ended, determining how to restore the environment. OK, it’s not really a myth we’re busting here, maybe a misconception. Let’s chat about the less visible task of long term restoration after an oil spill. When a spill happens, there are two tasks for those who caused the spill, clean up the spilled oil or chemical released, and restore the environment. That first responsibility, cleaning up the mess, is the subject of those media photos. It’s the immediate actions taken to scoop up the oil, clear the beaches, and rescue wildlife. It was not long after the Exxon Valdez spill that a television commercial appeared featuring a liquid dish soap used to wash birds covered in oil. That commercial has become so identified with oil spills, it’s practically the first thing that comes to mind when people start talking about oil spills. Now, what happens when I ask you to picture long-term restoration after an oil spill? What do you see? Having a hard time picturing it? That’s because restoring the environment takes time, often years. Restoration doesn’t lend itself to immediate imagery. It may not be the subject of a soap commercial, or be very visible to the public, but it’s the second half of the story after the emergency crews are gone. So what does restoring the environment after a spill look like? Well it can start with scientists taking samples of an oiled fish and conclude with the construction of new wetlands. The Damage Assessment, Remediation, and Restoration Program restores natural resources injured during an oil spill, release of hazardous materials, or vessel grounding to fully compensate the public for losses. To ensure that fish, wildlife, and critical habitats like beaches, wetlands and corals impacted by a spill are restored a specific process is followed that includes:

NOAA’s job is to not only to restore the environment, but to also evaluate and restore the experience the public lost during an oil spill, like fishing or swimming at the beach. For example, after spilled oil washes on shore, people often can no longer swim, picnic, or play at that beach. Or, there may be fewer or no recreational fishers on a nearby pier. In order to compensate the public for these lost days of enjoying the outdoors NOAA and partners may build restoration projects that improve recreational access to waterways, install boat launches, fishing piers, and hiking trails. During all this work, it’s important to keep the public informed and to ask for comments and ideas on how an injured area should be restored. Several restoration projects are currently open for public review and comment, read more here. Read more articles on myths and misconceptions in spill response: Rescuing Oiled Birds, Leave it to the Experts Debunking the Myths about Garbage Patches Clean up spilled oil at all costs? Not always 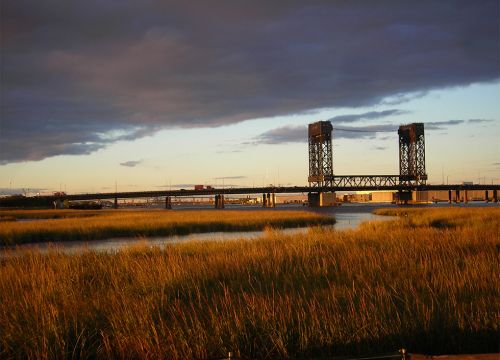 From landfill to vibrant tidal marsh, the wetland restoration at Lincoln Park in Jersey City, New Jersey, was funded from multiple oil spill settlements and the American Recovery and Reinvestment Act. This project restored a significant area of coastal wetlands in New York-New Jersey harbor's Arthur Kill ecosystem. (NOAA)
Back to top