With Restoration, Will Willamette River Lampreys Rebound for Northwest Tribes? 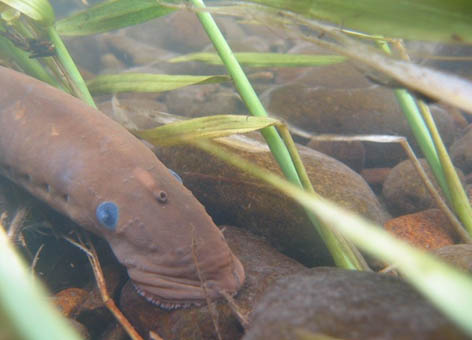 AUG. 9, 2012 — It's mid-summer, and something amazing is happening at Willamette Falls, a pounding cascade of water about 30 minutes from downtown Portland, Oregon. People are balancing on mossy, wet boulders tucked among the falls, reaching into its waters to harvest Pacific lamprey by hand. After pouring over the falls, the Willamette River rolls on for nearly 30 miles before joining the Columbia River. Prior to the construction of dams throughout the Columbia River basin, which includes the Willamette River and its tributaries, native Americans harvested lampreys in many other locations in much the same way they do now at Willamette Falls: by braving the cascading water and slippery rocks to grab wriggling lamprey by hand or with dip nets.

Northwest tribes have relied on the lamprey for food, medicinal, and ceremonial purposes for generations, since long before the first European explorers and fur traders became aware of these falls. But virtually all of the tribes' historic collection spots are gone now, either because they are submerged under dam-impounded waters or because lampreys are absent, their upstream journey blocked by dams. Willamette Falls is the last place in the Columbia basin where tribes can collect lampreys as their ancestors did. So it's not surprising that the tribes are concerned about the Willamette River lamprey and the rest of the Columbia basin lamprey population. In fact, lamprey numbers have declined steadily since at least the 1960s.

According to a 2008 U.S. Fish and Wildlife Service fact sheet [PDF], likely threats to lampreys include habitat loss associated with passage barriers, dredging, and stream and floodplain degradation; river flow alterations; predation by non-native species; poor water quality; changing ocean conditions; and exposure to toxic substances. Willamette River lamprey may be particularly vulnerable when it comes to toxic substances. Paddle the river as it flows north from the falls and you will eventually pass by downtown Portland. It is about here that you enter the Portland Harbor Superfund site, an 11-mile stretch of river with numerous patches of contaminated sediments from more than 100 years of industrial and urban uses.

Juvenile lampreys, called ammocoetes, must pass through this portion of river on their seaward migration, just as adult lampreys do as they return upriver to spawn. But it is the ammocoetes that are most likely to be at risk from pollutants buried in the riverbed. Lampreys are an anadromous species, which means they spawn in freshwater, spend their adulthood in the ocean, and return to freshwater to reproduce. In this respect they are similar to salmon, but lamprey life cycles are more complex. After hatching from their eggs, ammocoetes drift downstream to areas with slow-moving water and silty, sandy sediments. Here they burrow into the sediments and filter-feed for up to seven years before emerging to continue their journey to the sea. It is during this time that they may be particularly vulnerable as they eat contaminated foods and are directly exposed to pollutants for long periods. Ammocoetes are known to use the stretch of the Willamette River encompassed by the Superfund site, and lamprey tissue samples collected from within the site show higher levels of contaminants than those collected from cleaner sediments upstream of Portland Harbor.

It is not clear how ammocoetes in Portland Harbor are affected by contamination, but at least one analysis suggests exposure to contaminated sediment from Portland Harbor may adversely affect their behavior. So what is being done? The Environmental Protection Agency (EPA) has been working with its partners and a group of companies called the Lower Willamette Group to assess risks to human health and the environment and to determine how best to clean up the river. EPA's efforts are ultimately aimed at removing the threats posed by contaminated sediments. NOAA is one of eight members on a trustee council that is working to understand how contaminants may have impacted natural resources. The council is also planning habitat restoration projects to make up for those impacts. (The other members of the council include five tribes—Grand Ronde, Siletz, Umatilla, Warm Springs, and Nez Perce—and the state and federal fish and wildlife agencies.) 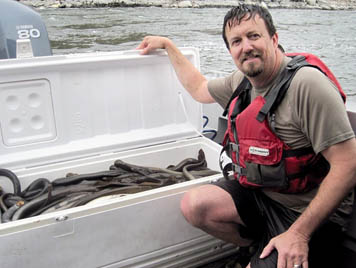 In addition to the lamprey, the council is planning restoration projects to benefit other types of fish and wildlife, like osprey, bald eagles, mink, and salmon. The council is focusing on these species because evidence suggests they may have been most impacted by contaminants and because they represent species guilds that are important in the lower Willamette River and similar Pacific Northwest ecosystems. This summer, the council wants to hear what the public thinks about restoration in Portland Harbor. A plan that lays out restoration options to benefit lampreys and other species that use the lower Willamette River, Multnomah Channel, and parts of the Columbia River close to the Superfund site has just been released. The council wants to hear from tribal members; people who fish on the river; folks who like to bike, jog, or picnic along the river; and others who care about the health of fish, wildlife and other natural resources in the Superfund site.

The plan includes a list of 44 potential restoration projects, including activities like removing culverts to improve access to upstream habitats, creating off-channel areas with clean water and sediment where fish can rest during migration, and "daylighting" cold, clean streams that currently run through pipes in the heavily built-up and industrial section of the river. For the next couple of months, the council is hosting meetings, presenting at neighborhood associations, and attending community events around Portland to let people know about their work and gather comments on the plan. To see a copy of the draft plan and a schedule of meetings and comment deadlines, visit http://www.fws.gov/oregonfwo/Contaminants/PortlandHarbor. And for a little lamprey fun, take a look at the U.S. Fish and Wildlife Service's lamprey activity book [PDF]. 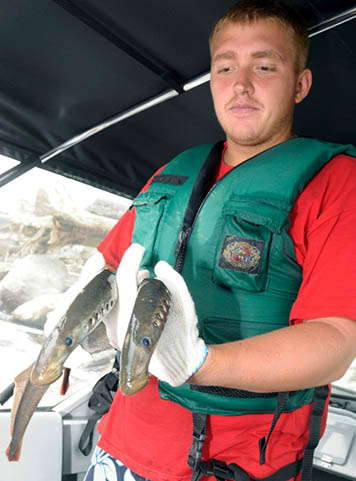 Confederated Tribes of Grand Ronde Tribal member Torey Wakeland displays some lamprey that were harvested at Willamette Falls on Monday, July 18, 2011. (Photo courtesy of Ron Karten.)
Back to top