MAY 27, 2014 -- Just south of Seattle, the airplane manufacturer Boeing Company has created one of the largest habitat restoration projects on the Lower Duwamish River. Boeing worked with NOAA and our partners under a Natural Resource Damage Assessment to restore habitat for fish, shorebirds, and wildlife harmed by historical industrial activities on this heavily used urban river. We documented and celebrated this work in a short video. 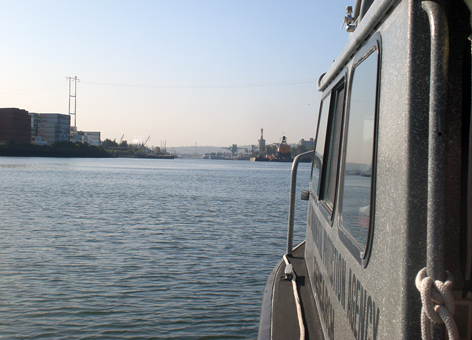 Cutting through south Seattle, the Duwamish River is still very much an industrial river. (NOAA)

What Kind of Restoration?

In this video, you can learn about the restoration techniques used in the project and how they will benefit the communities of people, fish, and wildlife of the Duwamish River. The restoration project included activities such as:

Why Does this River Need Restoring?

In 1913, the U.S. Army Corps of Engineers excavated and straightened the Duwamish River to expand Seattle's commercial navigation, removing more than 20 million cubic yards of mud and sand and opening the area to heavy industry. But development on this waterway stretches back to the 1870s. Ninety-seven percent of the original habitat for salmon—including marsh, mudflats, and toppled trees along multiple meandering channels—was lost when they transformed a 9-mile estuary into a 5-mile industrial channel.

Left, the new restoration site constructed by Boeing will vastly expand the amount of suitable habitat for salmon on the Duwamish River. It is in addition to the North Wind's Weir restoration site, shown here and planted in 2010 further up the Duwamish River. Right, the shoreline outside the Boeing plant in 2012, before being transformed into salmon-friendly habitat. (NOAA)

As damaged and polluted as the Lower Duwamish Waterway is today, the habitat here is crucial to ensuring the survival and recovery of threatened fish species, including the Puget Sound Chinook and Puget Sound Steelhead. These young fish have to spend time in this part of the Duwamish River, which is a Superfund Site, as they transition from the river's freshwater to the saltwater of the Puget Sound and Pacific Ocean. Creating more welcoming habitat for these fish gives them places to find food and escape from predators. Fortunately, this restored waterfront outside of a former Boeing plant will be maintained for all time, and further cleanup and restoration of the river is in various stages as well. UPDATE 6/17/2014: On June 17, 2014, Boeing hosted a celebration on the newly restored banks of the Lower Duwamish River to recognize the partners who helped make the restoration a reality. Speakers at the event included NOAA, Boeing, the Muckleshoot Tribe, and a local community group. This also gave us the opportunity to share the video "A River Reborn," which was well received. 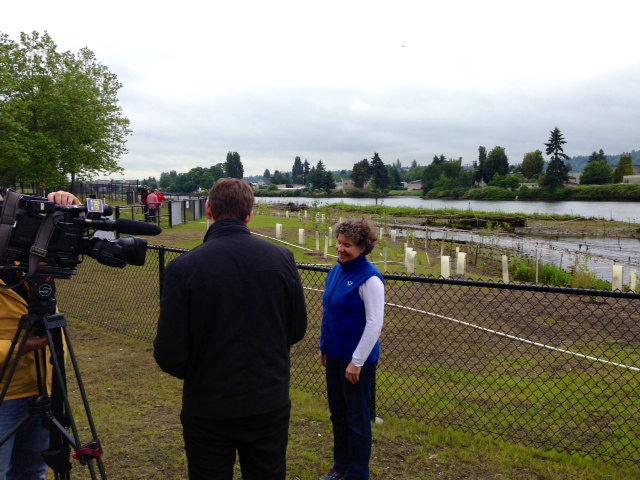 NOAA scientist Rebeccas Hoff, who has been working on evaluating and restoring the damages to the Duwamish, was interviewed on June 17, 2014 with the newly planted vegetation taking root on the river's shoreline behind her. (NOAA) 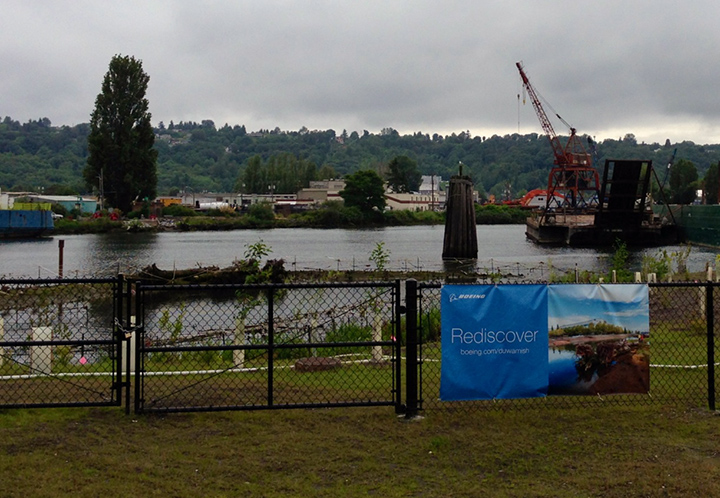 One of the event's signs invites the community to rediscover the Duwamish River, with some of the 170,000 native plants newly planted on the shoreline behind it. (NOAA)
Back to top