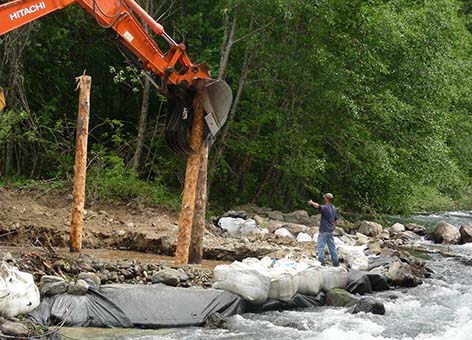 JULY 13, 2012 — Salmon in Washington's White River watershed should be breathing (through their gills) a collective sigh of relief. A mile of their habitat on the Greenwater River in the Cascade Mountains finally has returned to a more natural state.

This restoration project is compensating for a diesel spill in nearby Silver Creek when a faulty pump overfilled a fuel tank and despoiled the area on November 3, 2006.

This small 200-gallon operating, or "day," tank was part of a Puget Sound Energy generator station that supplies backup power to the nearby Crystal Mountain ski area.

On that November day, however, a system failure sent an extra 18,000 gallons of fuel gushing through the day tank from three 12,000-gallon underground tanks. The wave of diesel eventually seeped underground into Silver Creek, where it not only affected endangered Chinook salmon and bull trout but at least five miles of the creek and 16 acres of wetlands.

NOAA and our co-trustees evaluated how extensive the environmental injuries were and recovered damages from Puget Sound Energy. The trustees then worked with local partners to carry out restoration activities, which are now complete. The projects emphasized Chinook salmon and their river habitat in the White River watershed (where Silver Creek is located). 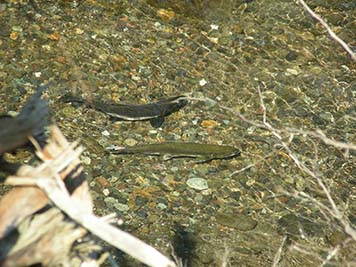 Historically, log jams were prevalent in Pacific Northwest rivers [PDF] and would help slow and redirect a river's straight, fast-moving currents. The benefits for salmon are two-fold: This action chisels deep pools and pockets into the riverbed, which adult and young salmon need to feed and find refuge from predators, and it also overflows some water outside of the main river channel, creating slower-moving tributaries perfect for older salmon as they prepare to spawn. Engineering log jams through restoration projects like this one helps recreate these benefits for salmon [PDF].