For a Salt Marsh on San Francisco Bay's Eastern Shore, Restoration Means a Return to the Tides

OCTOBER 14, 2014 -- For more than half a century, a large portion of Breuner Marsh has been walled off from California's San Francisco Bay, depriving it of a daily infusion of saltwater. The tide's flooding and drying cycle is a key component of healthy salt marshes. But for decades, a succession of landowners drew up plans for developing the property and therefore were happy to keep the levee up and the bay's waters out of it. Today, however, ownership has changed and things look different at Breuner Marsh. The landing strip built for model airplanes is gone, and soon, parts of the levee will be as well. For the first time in years, this land which was once a salt marsh will be reconnected to the bay, allowing it to return to its natural state.

Before the Floodgates Open

A major milepost on the road to restoration for Breuner Marsh originated about five miles down the coast at Castro Cove. From the early 1900s until 1987, this tidal inlet on the eastern shore of San Francisco Bay had a discharge pipe pumping wastewater from the nearby Chevron Richmond Refinery into the cove. As a result, mercury and a toxic component of oil known as polycyclic aromatic hydrocarbons permeated the sediments beneath the cove's waters. The State of California had pinpointed this area as a toxic hotspot, and by the early 2000s, Chevron was ready to begin cleanup and restoration. Along with the state, NOAA and the U.S. Fish and Wildlife Service assessed the environmental impacts of historical pollution from the refinery and the amount of restoration needed to offset them. Through this Natural Resource Damage Assessment process, NOAA's Damage Assessment, Remediation, and Restoration Program (DARRP) and our partners settled with Chevron on the funding the company would provide to implement that restoration: $2.65 million. Because the impacts to Castro Cove’s salt marshes occurred over such a long time, even after Chevron cleaned up the roughly 20 worst-affected acres of the cove, there simply was not enough habitat in the immediate area to adequately make up for the backlog of impacts. The 2010 settlement called for Chevron to restore about 200 acres of marsh. This took us up the road to Breuner Marsh, part of a degraded coastal wetland that was ripe for restoration and which became one of two projects Chevron would fund through this settlement.

A Vision of Restoration

The vision for Breuner Marsh turned out to be a lot bigger than the $1 million originally set aside from Chevron’s settlement. A lot of this drive came from the Richmond, California, neighborhood of Parchester Village, a community across the railroad tracks from Breuner Marsh which was advocating the property’s habitat be restored and opened to recreation. Eventually, the East Bay Regional Park District was able to purchase the 218-acre-site and is managing the $8.5 million restoration of Breuner Marsh. Additional funding came from the park district and nine other grants. Construction began in 2013 and the project, which also includes building trails, picnic areas, and fishing spots, is expected to wrap up in 2015. While at least 30 acres of Breuner Marsh will be transformed into wetlands fed by the tide, some areas will never be flooded because they sit at higher elevation. Instead, they will become a patchwork of seasonal wetlands and prairie. Yet this diversity of habitats actually makes the salt marsh even more valuable, because this patchwork creates welcoming buffer zones for various birds, fish, and wildlife as they feed, rest, and reproduce. But first, those levees need to be breached and the tide needs to reach deep into Breuner Marsh, creating conditions just right for the plants and animals of a salt marsh to take hold once more. Conditions the project managers have been working hard to prepare. 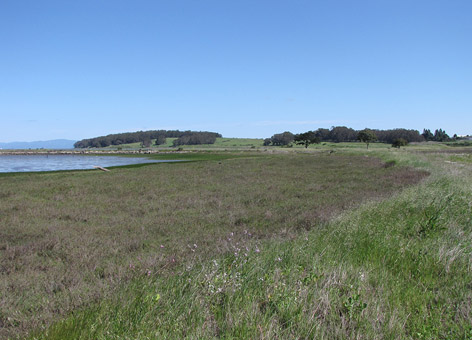 This area along the eastern shore of San Francisco Bay will be enhanced and expanded as part of the restoration of Breuner Marsh. (NOAA) 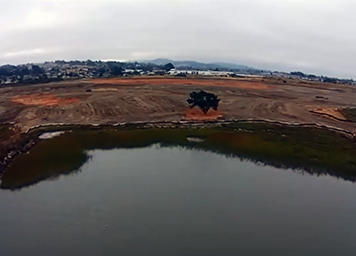 A view of the Breuner Marsh restoration site, where portions of the area have been graded and are waiting the take down of the berm. (Screen shot from video courtesy of Questa Engineering Corporation/East Bay Regional Park District)
Back to top