To Save Corals in an Oahu Bay, First Vacuum up Invasive Algae, Then Apply Sea Urchins

On average, it would take a diver two strenuous hours to remove one square meter (roughly 10.5 square feet) of the exotic red algae carpeting coral reefs in Kaneohe Bay, Hawaii.

In addition to ripping away thick mats of algae, divers also had to pluck off any remaining algae stuck to the reef and use a hand net to capture bits floating in the surrounding water.

Even then, these invasive algae were quick to regrow from the tiniest remnants left behind.

Today, however, divers can clear the same area in roughly half the time, or even less, depending on how densely the algae are growing. How? With the help of a device called the "Super Sucker."

This underwater vacuum is not much more than a barge equipped with a 40 horsepower pump and long hose that gets lowered into the water. Divers still pull off chunks of algae from the reef, but they then stuff it into the device's hose.

The success of the Super Sucker stands to be augmented with help from small, spiny sea creatures—sea urchins—as well as a new, dedicated infusion of funding from NOAA which will expand the device's reach in Oahu's Kaneohe Bay.

But the question remains: How did exotic algae come to cause so much trouble for corals in the first place?

A Welcome Introduction, an Unintended Stay

The problematic marine algae, or seaweed, in Oahu's Kaneohe Bay actually is a complex of two types of algae originally from Southeast Asia: Kappaphycus and Eucheuma. Both algae were brought to this area on the eastern side of Oahu in the 1970s in an attempt to cultivate them as a source of carrageenan, a thickening agent used in processed foods.

While the agricultural endeavor never took off in Oahu, these algae did. Unfortunately, this was somewhat of a surprise. Two years after the algae's introduction, several studies found a low likelihood of their escaping from experimental pens and threatening coral habitat in the bay.

In the decades since, Kappaphycus and Eucheuma have proven that prediction very wrong, as these algae are now comfortably established in Kaneohe Bay. Because these algae spread aggressively once they arrived in this new environment, they have earned the label "invasive." The algae have been overgrowing the coral reefs, smothering and killing corals by blocking the sunlight these organisms need to survive. These days, some areas of Kaneohe Bay are no longer dominated by corals but instead by invasive algae. 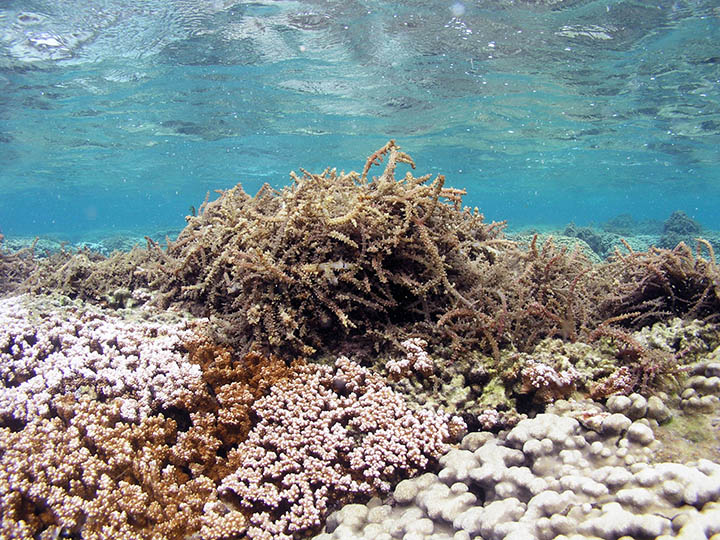 Delivering a Double-Whammy to Invasive Algae

Around 2005, NOAA helped fund the development of the Super Sucker as part of a joint project between the State of Hawaii and the Nature Conservancy. The project was aimed at containing these invasive algae in Kaneohe Bay, a partnership that continues to the present day.

Today, NOAA is becoming involved once more by expanding this project and bringing the Super Sucker into new parts of Kaneohe Bay. NOAA will accomplish this by using part of the nearly $6 million available for restoration after the 2005 grounding of the ship M/V Cape Flattery. When the ship became lodged on coral reefs south of Oahu, efforts to refloat the vessel and avoid an oil spill caused extensive harm to coral habitat across approximately 20 acres, an area now recovering well on its own.

The Super Sucker barge at left in Kaneohe Bay. The green collection hose used to vacuum up invasive algae from the reefs below is visible on the water surface. (Credit: State of Hawaii Division of Aquatic Resources)

This restoration project will not just involve the Super Sucker, however. Another key component in controlling invasive algae in Kaneohe Bay is reintroducing a native predator. While most plant-eating fish there prefer to graze on other, tastier algae, native sea urchins have shown they are happy to munch away at the tiniest scraps of Kappaphycus and Eucheuma found on reefs. But the number of sea urchins in Kaneohe Bay is unusually low.

Currently, the State of Hawaii Division of Aquatic Resources is raising native sea urchins and experimentally releasing them back into the bay. NOAA’s restoration project for the Cape Flattery coral grounding would greatly expand the combined use of the Super Sucker and reintroduced sea urchins to control the invasive algae.

Together, mechanically removing the algae with the Super Sucker and reintroducing sea urchins in the same area should be effective at curbing the regrowth and spread of invasive algae in the northern part of Kaneohe Bay. Making sure invasive algae do not spread outside the bay is an important part of this coral restoration project. This northern portion, near a major entrance to the bay, is a critical area for containing the algae and making sure it doesn't escape from the bay to other near shore reefs.

Ultimately, the goal is to move toward natural controls (i.e., the sea urchins) taking over the containment of Kappaphycus and Eucheuma algae in Kaneohe Bay. 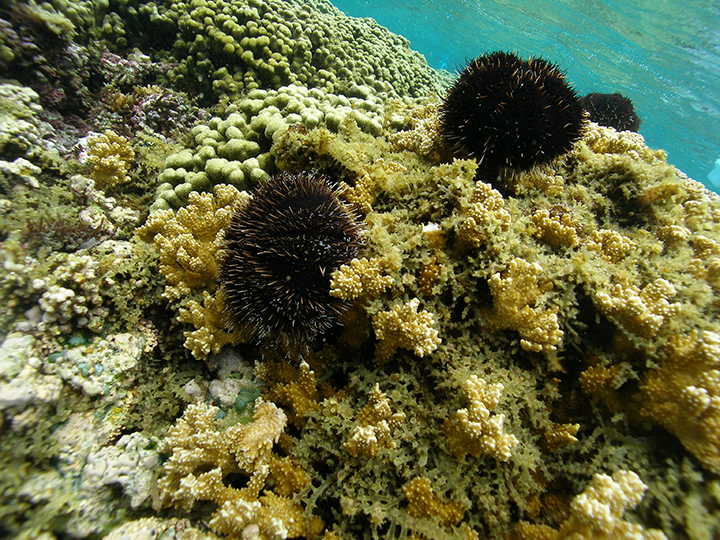 The benefits of removing the algae from the area’s coral reefs are two-fold. First, clearing away the carpets of algae saves the corals that are being smothered beneath them. Second, opening up other areas of the seafloor previously covered by algae creates space for young corals to settle and establish themselves, growing new reef habitat.

Another benefit of clearing the invasive algae in this project is that it provides a source of free fertilizer for local farmers. Not only does it offer a sustainable source of nutrients on agricultural fields but the algae breaks down more slowly and is therefore less susceptible than commercial fertilizer to leaching into nearby waterways.

Even so, a 2004 study confirmed that these algae do not survive in waters with low salt levels, meaning that any algae that do run off from farms into nearby streams will not eventually re-infect the marine environment. Another win. 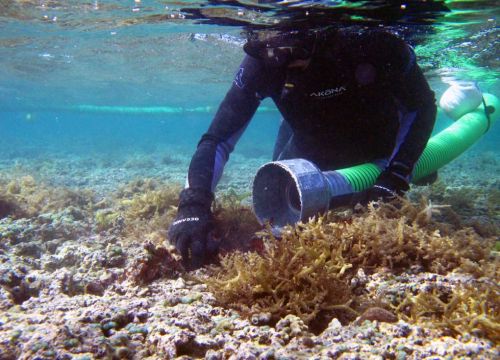 With the help of a gentle vacuum hose attached to a barge -- a device known as the "Super Sucker" -- divers can now remove invasive algae from coral reefs in Kaneohe Bay in much less time. (Credit: State of Hawaii Division of Aquatic Resources) 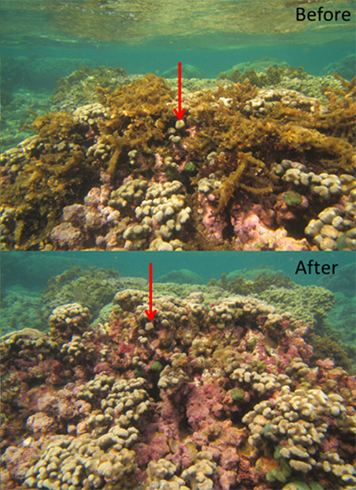 Top, coral reef before Super Sucker operations, and bottom, the same reef after the Super Sucker has cleared away the invasive algae. (Credit: State of Hawaii Division of Aquatic Resources)
Back to top