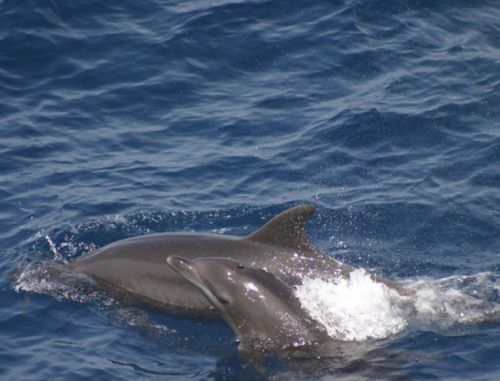 A bottlenose dolphin calf in the Gulf of Mexico. Image credit: NOAA

In the aftermath of the largest oil spill in history, many expressed concern about its impact on these long-lived, slow-to-mature creatures. Now, almost seven years after the spill, scientists have a better understanding of how they fared. The team examined this research, synthesizing peer-reviewed findings into two easy-to-understand outreach bulletins.

Starting in 2010 a month before the Macondo blowout, scientists documented more than 1,000 stranded dolphins and whales along the northern Gulf of Mexico. From 2010 until 2014, they examined the health and stranding patterns of dolphins along the coasts of Louisiana, Mississippi, Alabama, and Florida, discovering that oiled areas had more sick and dead dolphins. Scientists also found many sick and stranded pre-term and newborn dolphins. Overall, young dolphins in the study area were eight times more likely to have pneumonia or inflamed lungs and 18 times more likely to show signs of fetal distress than those from areas outside the Gulf. The Deepwater Horizon’s impact on bottlenose dolphins report examines all of the factors, including oil that scientists think contributed to dolphin populations’ drop in numbers during this time.

The Sea turtles and the Deepwater Horizon oil spill report details 2010’s impacts on threatened or endangered sea turtles species in the Gulf. In total, scientists estimate that the oil spill and related response activities killed between 95,000 and 200,000 sea turtles. Lasting impacts of these losses may take time to become clear. For example, scientists do not fully understand how oil exposure affects sea turtles’ ongoing reproductive abilities. They continue to monitor sea turtle populations by counting numbers of nests, hatchlings, and adult females on beaches.

More articles about the impacts of Deepwater Horizon on marine mammals: