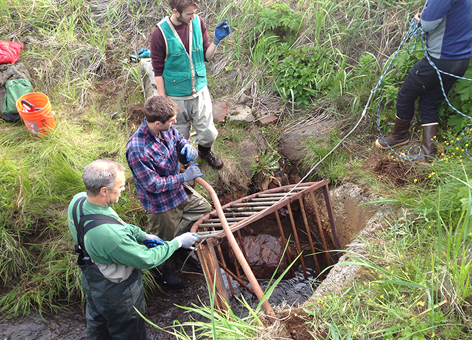 We removed grates and racks, originally installed to catch floating trash, from Helmet Creek to improve the flow and profile of the stream for fish. (NOAA)

JULY 31, 2013 -- Earlier this year, NOAA Oil Spill Coordinator Ian Zelo shared the story of a 2010 diesel spill on Adak Island in the central Aleutian Islands of Alaska: a tanker overfilling an underground storage tank; the fuel entering the salmon stream Helmet Creek and nearby Sweeper Cove; the nightmarish logistics of getting to the remote, sparsely populated island; and assessing environmental injury to both the stream and marine habitats amid blizzards, possible unexploded ammunition, and the dark of night. In the wake of the spill, dead fish were collected from Helmet Creek, where diesel was observed both in the creek's waters as well as in the habitat along its banks. As a result, pink salmon and Dolly Varden trout eggs, riparian (stream-side) habitat, and aquatic insects likely were affected in the creek and adjacent riparian area. The spill also may have affected marine mammals in Sweeper Cove and as many as eight marine birds may have died due to oil exposure and subsequent hypothermia. Fortunately, however, the story does not end there. After considering the environmental injuries caused by the diesel spill in Helmet Creek, the natural resource trustees, including NOAA, U.S. Fish and Wildlife Service, and the Alaska Departments of Natural Resources, Environmental Conservation, and Fish and Game, developed restoration projects intended to compensate for injuries to fish, the stream, and surrounding habitat.

At left, part of restoring Helmet Creek after the 2010 oil spill involved replanting vegetation along the banks. Right, a close up of Helmet Creek. (NOAA)

On July 8, 2013, NOAA Restoration Center, Alaska Department of Fish and Game, and representatives from the fuel facility responsible for the spill traveled to Adak Island to undertake restoration work for the harm done to fish, wildlife, and their habitat by the oil spill. 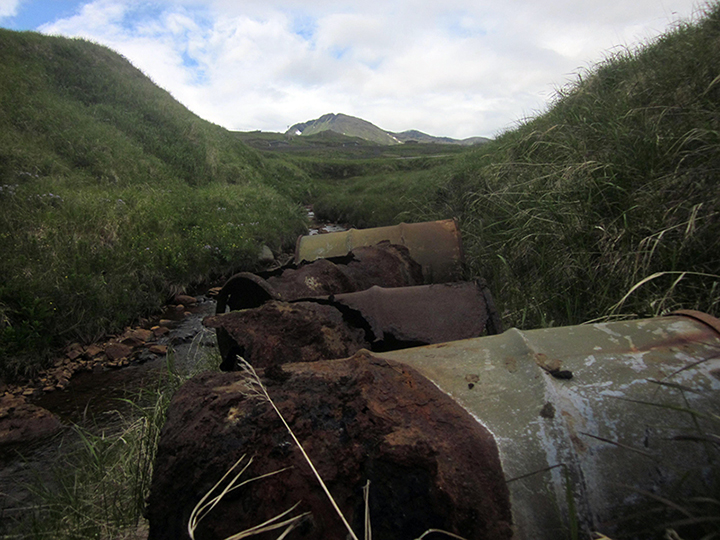 To improve habitat for salmon and other fish, we removed old barrels from Helmet Creek. (NOAA)

During this trip, we restored fish passage to the creek and improved habitat and water quality by removing creosote pilings and grates over culvert openings which had created barriers and changes to the stream profile, re-grading the stream bed, restoring the main flow channel, and removing at least a dozen 55-gallon drums from the creek bed and banks.

Left, workers remove rusted drums from the banks of Helmet Creek in July of 2013. Right, monitoring the streambed regrade as part of the restoration projects on Adak Island. (NOAA) 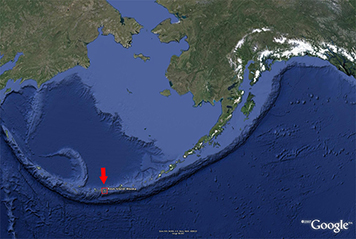 Location of Adak Island (red arrow) among Alaska's Aleutian Islands.
Back to top