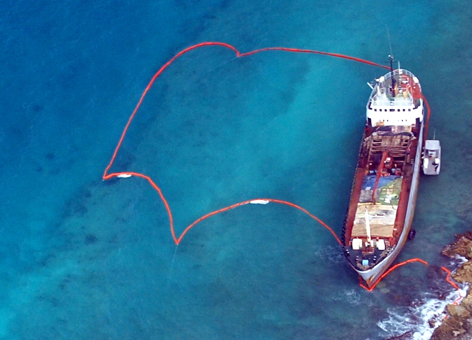 JUNE 26, 2012 -- Late last week a small freighter, the M/V Jireh, ran aground on Mona Island, an uninhabited island off Puerto Rico. The 22-square-mile island, an ecological reserve, is about 41 miles west of the main island of Puerto Rico.

NOAA, U.S. Fish and Wildlife Service, Commonwealth of Puerto Rico, and U.S. Coast Guard are focusing on recovering the fuel and oil on board the freighter to minimize the environmental impact.

Efforts are underway to remove about 2,000 gallons of fuel oil from the Jireh. So far, a major oil spill appears to have been averted, but there is concern about the physical impact of the ship itself.

As the ship plowed into the reef, it crushed and toppled corals. Unless restored, these unstable and barren areas may take generations to recover as tiny young coral larvae struggle to find a stable place to attach to the reef. Scientists are currently conducting a survey to see how much coral the ship affected.

[UPDATE JUNE 28, 2012: After surveying the underwater area around the grounded vessel, NOAA divers concluded that the ship caused minimal impact to coral. As of June 27, they were assessing whether any coral colonies or endangered species 300 feet out from the ship might be in its path as salvage teams attempted to refloat and remove it. NOAA would proactively remove and transplant any vulnerable species before salvage operations began.

Response crews have confirmed the Jireh is sound enough for them to go ahead and remove the diesel on board. They have deployed 100 feet of containment boom around the smaller response vessel ready to receive the fuel pumped off the Jireh. They also are removing a variety of oiled cargo from the ship, including mangoes, water bottles, cinder blocks, grain, bags of horse feed, and carbonated drinks.]

An injury doesn't only stem from the grounded vessel. Anchors for the protective boom meant to contain any spilled oil have to be placed carefully to prevent additional damage, and care needs to be taken when the salvage tugs start to rig their own anchors and cables. About 800 feet of oil boom is currently strung around the vessel.

Some emergency actions can be taken to restore the coral reef, but recovery will still be slow. NOAA's Office of Response and Restoration works to minimize those environmental impacts and develop restoration alternatives. If you are interested in other photos showing how we address coral injuries, take a look at the Maitland, Fla., and Cape Flattery, Hawaii, cases.

Mona Island is uninhabited, but there is a lot of shipping traffic nearby, and it has been affected by other ship groundings. In July 1997, the 325-foot container ship Fortuna Reefer ran aground on the south shore of the island, damaging approximately 6.8 acres of coral habitat. In September 1997, NOAA initiated an emergency restoration to the reef dominated by elkhorn coral (Acropora palmata) that was completed by mid-October 1997.