Ships Aground on Coral Reefs, Then and Now: The USS Guardian vs. NOAA Ship Fathomer 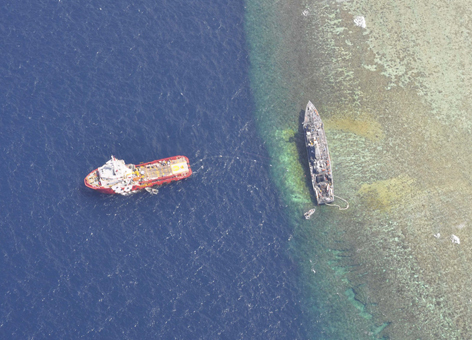 Petroleum-based products and human wastewater are removed from the U.S. Navy mine countermeasure ship USS Guardian, which ran aground on the Tubbataha Reef in the Sulu Sea on Jan. 17. No fuel has leaked since the grounding and all of it has been safely removed. With the deteriorating integrity of the ship, the weight involved, and where it has grounded on the reef, dismantling the ship in sections is the only supportable salvage option. (U.S. Navy)

This is a post by Office of Response and Restoration Incident Operations Coordinator, Doug Helton. FEB. 25, 2013 — On Jan.17, 2013, the Navy mine countermeasures ship USS Guardian ran aground on a coral reef in the Philippines. Salvage experts evaluated various options for removing the ship, including towing or pulling it off the reef, but concluded that such efforts would cause even more damage to the reef and the ship's hull.

Earlier this month, the Navy decided to dismantle the ship and remove it in smaller sections in order to minimize damage to the reef and surrounding marine environment. The Tubbataha Reef, where the ship grounded in the Sulu Sea, is a marine park and UNESCO World Heritage Site, recognized for its biodiversity, pristine reefs, and protected nesting habitat for marine birds and sea turtles. The photos of the stranded ship and the concern about the corals in this part of the world reminded me of a story about the old U.S. Coast and Geodetic Survey (USC&GS) vessel Fathomer.

The USC&GS mission was to survey the U.S. coastline and create nautical charts of the coast to help increase maritime safety. Today, this part of NOAA is called the Office of Coast Survey, which produces navigational products, data, and services to keep maritime commerce moving and to protect life and property at sea. I came across old photos of the Fathomer when I was working on a project studying the impact of vessel groundings on corals. That story ended quite differently than the USS Guardian, and shows how environmental protection has become a much bigger concern for salvors. In the old days, the focus of salvage was strictly to save the ship and cargo, but modern salvors (salvage crews) have a much bigger emphasis on protecting the environment.

On Aug. 15, 1936, the Fathomer dragged anchor in a typhoon and, like the USS Guardian, ended up grounded on a coral reef in the Philippine Islands[1]. At that time, the Philippines were a commonwealth of the United States, and the Fathomer was surveying and charting the islands. The story of the Fathomer's grounding and salvage is a good sea story, complete with rum. All of the crew survived the storm and grounding, but the official history mentions that "Everyone was bruised and suffering from exhaustion and exposure. Two quarts of brandy, stored in the sick bay, were rationed out to all hands, and undoubtedly resulted in no one developing a severe cold or pneumonia." The entire crew was later commended for their "seamanship, courage and fortitude." 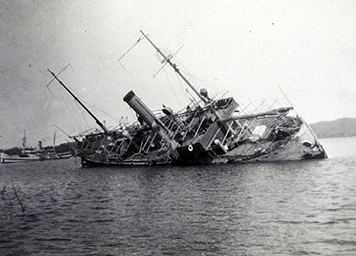 The NOAA ship Fathomer aground on a coral reef in the Philippines after the typhoon of August 15, 1936. (NOAA)

But what I found most interesting was the salvage efforts. Buried in the official history are some details that show that coral reef protection was not a concern in 1936. For example, a pile driver was used to place a "cluster of piles driven on the reef," and these pilings were "backed by three anchors imbedded in the reef." Wire ropes were then used to try to bring the Fathomer upright and haul it off the reef, but those efforts were unsuccessful and ultimately the reef was dynamited and the loose coral was dredged, allowing the Fathomer to be towed to deeper water. The removal of the USS Guardian is ongoing, but thankfully, it is clear, almost 80 years later, that coral reef protection will be very high on the list of priorities.