Examining the Japanese skiff that washed up near Crescent City, Calif., on April 7, 2013. This is the first verified item from the Japan tsunami to appear in California. (Redwood Coast Tsunami Working Group)

APRIL 26, 2013 — The Consulate General of Japan in San Francisco has confirmed to NOAA that a 20-foot-long skiff found near Crescent City, Calif., is the first verified piece of Japan tsunami debris to turn up in California. Crescent City, a coastal town surrounded by redwoods, is only a twenty-mile drive from Oregon down the iconic, coastal Highway 101.

Once the skiff was found, the U.S. Coast Guard and the local sheriff’s office worked quickly to remove it from the shoreline. Help translating the Japanese writing on it came from further down the coast, from staff at California's Humboldt State University. They traced the skiff to Takata High School, located in Japan's Iwate Prefecture, an area devastated by the March 2011 earthquake and tsunami. A teacher from the school reportedly identified the vessel as belonging to them, which the Japanese Consulate has now confirmed. To date, 26 other marine debris items with a confirmed connection to the 2011 tsunami have washed up in Oregon, Washington, Hawaii, Alaska, and Canada's British Columbia. And like so many of them, the small, flat-bottomed boat that washed up in California was thick with gooseneck barnacles, a common and widespread filter feeder that attaches itself to floating objects in the open ocean.

While unusual-looking, these barnacles are not invasive and have a fascinating historical myth purporting that a type of goose developed from gooseneck barnacles because they had similar colors and shapes (a typical-if-faulty basis for classifying life in earlier eras). However, the influx of sea creatures aboard tsunami marine debris also brings the concern that aquatic species hitching a ride to North America may make themselves at home, possibly to the detriment of marine life and commerce communities here in the United States. 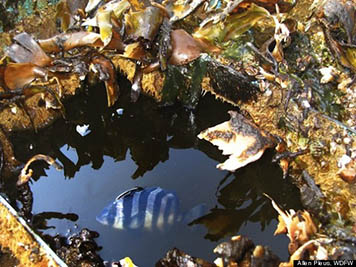 A submerged compartment in the back of the Japanese boat that washed up in Long Beach, Wash., provided a refuge for five striped beakfish. (Washington Department of Fish and Wildlife/Allen Pleus)

This issue was highlighted in the unusual case of another small Japanese boat lost in the 2011 tsunami. The Sai-shou-maru came ashore near Long Beach, Wash., on March 22, 2013, but the inside of it looked like a miniature aquarium. Five live fish were swimming about in a submerged compartment at the back of the boat. They were striped beakfish, a species native to coral reefs mainly in Japanese waters, sometimes found in Hawaii, but certainly not in the cold waters of the Pacific Northwest coast.

According to the Washington State Department of Ecology website, "Besides the five striped beakfish found in the open well of the boat when it washed ashore, the Washington Department of Fish and Wildlife estimates 30 to 50 species of plants and animals were also on the Sai-shou-maru—including potential invasive species. State officials quickly removed the Sai-shou-maru from the beach and collected samples of potential invasive species including the fish, algae, anemones, crabs, marine worms and shellfish." However, most of the species arriving on marine debris are not invasive—even if they are hitchhikers. Keep up with NOAA's latest efforts surrounding the issue of Japan tsunami marine debris at marinedebris.noaa.gov/tsunamidebris. 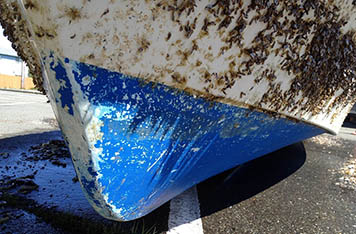 A close up of the boat's hull reveals the many small gooseneck barnacles, a common open-ocean species. (Redwood Coast Tsunami Working Group)
Back to top