July 26, 2017 - The U.S. Coast Guard announces a ship collision in Puget Sound off the Shilshole Bay. What happens now?

Trying to answer that question started the journey of participants in this year’s NOAA Science Camp. Washington Sea Grant organizes the popular camp and each year participants discover how NOAA oceanographers, biologists, chemists, physical scientists and others from the Office of Response and Restoration respond to hazardous spills.

More than 90 campers participated in 10 two-hour sessions during the two weeks of science camp, held July 10-21 at NOAA’s Western Regional Center in Seattle. Guided by staff from both the Emergency Response Division and the Assessment and Restoration Division campers explored answering the five questions our response and assessment staff ask during spill incidents:

Camp participants learned what scientific data is gathered to answer those questions. They were also introduced to response tools like our GNOME modeling software, and Environmental Sensitivity Index maps.

Our staff also helped campers learn about pollutants from cars, homes, agriculture, and other types of land uses and the effects on the Puget Sound. In other lessons, campers simulated the flow of water and pollutants in the environment, using tabletop watershed models and building groundwater models. They then brainstormed methods to clean up, contain, and prevent watershed pollution.

In another session, campers rolled up their sleeves, donned lab googles and gloves and become aquatic toxicologists for a day, testing samples for toxic chemicals and water quality parameters and learned how to interpret their data.

Later in the week, campers had to a solve science mystery. They visited several NOAA offices to gather more information about various aspect of the scenario and then applied what they learned to test their hypotheses. Campers presented their findings and conclusions on the last day of camp each week and were evaluated by a scientist representative from each office.

Marla Steinhoff and Amy MacFadyen contributed to this article. 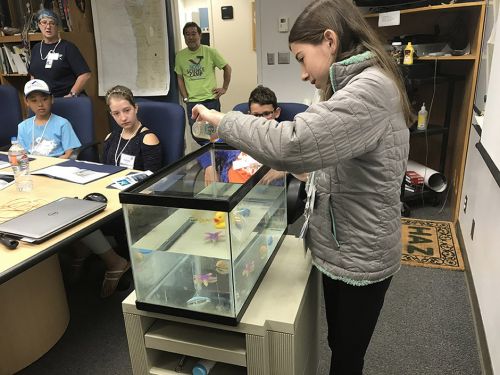 A camper pours a bit of sesame oil into a fish tank to simulate a marine oil spill. NOAA Science Camp participants learned the basics of how spilled oil behaves, effects the environment, and how we forecast where it might go. Image credit: NOAA
Back to top