Stepping on Board the Most Eerie, Neglected Ship I Had Ever Seen

This is a post by the Office of Response and Restoration's LTJG Rachel Pryor, Northwest Regional Response Officer. OCTOBER 29, 2015 -- Before Friday, October 9, 2015, I had never set foot on an abandoned ship. Or for that matter, any other manmade structure so neglected that trees were growing out of it. But on that day, I was invited to accompany three members of the U.S. Coast Guard here in Seattle, Washington, to investigate a tugboat which was reported to be abandoned and only four inches away from sinking. After a quick glance at the rusting, eerie hulk barely afloat in a ship canal, my bets were on it being abandoned too. Once at the docks, we met pollution responders from the State of Washington and a local salvage company. After taking stock of the neglected vessel and its surrounding conditions, we boarded the vessel and began conducting an investigation. The Coast Guard inspected the engine room first, where they measured how much water currently was flooding the tug's engine room. Then, they made note of any hazardous materials nested in cupboards and on shelves—large industrial batteries, paint cans, or lubricants—that would require special disposal. My favorite part was rummaging through the galley, captain’s quarters, and the bridge. The living areas on board the vessel appeared ransacked. For starters, the helm had been removed and copper wires from the fire panel were missing. However, we were looking for any information on the layout of the vessel in order to answer a number of questions. How many fuel tanks were on board and how large were they? Where were the ballast tanks? Who was the last owner or when was the last log entry in the book recording the engine’s oil changes? Unfortunately, our search that day turned up empty, aside from a cluttered mess of clothes, a half-used bottle of aspirin, some books, and a pile of empty beer cans resembling bones in an open graveyard. Our only clues leading to who owned this boat were a chalkboard message left to the owner by a shipmate and a left-behind DVD from the movie rental kiosk company Redbox. The movie was Couples Retreat, which was released in 2009, suggesting someone previously on board had a soft spot for romantic comedies and now owes Redbox a sizable bill for this dollar-per-day rental.

Left, nature was beginning to reclaim this abandoned tugboat: moss and trees take root in its decaying floors. Right, inside the abandoned tug Vigorous the only clues about the owner were revealed in a note from a shipmate on a chalkboard and an overdue rented romantic comedy.(NOAA)

The last moorage payment the dock facility received for this boat was in 2008. Since then, the vessel has been slowly withering away and nature is creeping in. Trees and moss grow freely in cracks and crevices, eating away at the ship's structure. While the Coast Guard will pay for the salvage company to pump the water out of the engine room and fix the leak to keep the vessel from sinking, they do not have the funds or jurisdiction to get rid of the derelict tug. The problem of abandoned vessels is a recurring, expensive, and polluting one, which a NOAA colleague also learned firsthand:

"These neglected ships often pose significant threats to fish, wildlife, and nearby habitat, in addition to becoming eyesores and hazards to navigation. Derelict vessels are a challenge to deal with properly because of ownership accountability issues, potential chemical and oil contamination, and the high cost of salvage and disposal. Only limited funds are available to deal with these types of vessels before they start sinking."

And, tied to a pier in Seattle, yet another decaying vessel will remain haunted by the remnants of those who abandoned it and will continue to haunt our waterways as well. Editor's note: Stay tuned for a special series in early November when we’ll be diving deeper into the issues of sunken, abandoned, and derelict vessels—covering everything from when they become maritime heritage sites to how we deal with those that turn into polluting eyesores. 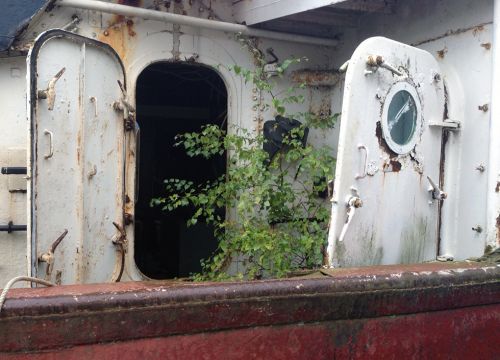 Abandoned and derelict ships are a highly visible problem in almost every U.S. port and waterway. (NOAA) 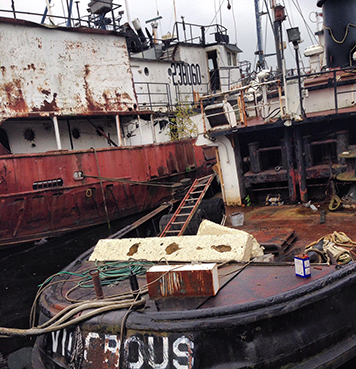 To the right is the T/V Vigorous, an apparently abandoned and less-than-vigorous-looking tugboat in Seattle, Washington, which NOAA's LTJG Rachel Pryor recently helped investigate. (NOAA)
Back to top