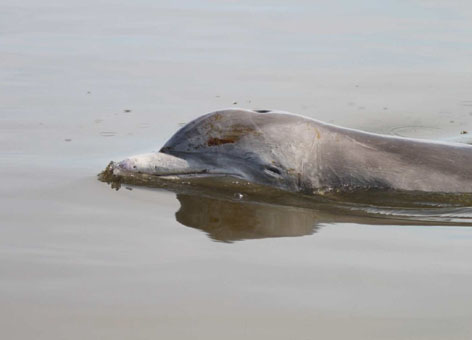 A dolphin is observed with oil on its skin on August 5, 2010, in Barataria Bay, La. (Louisiana Department of Wildlife and Fisheries/Mandy Tumlin)

DEC.18, 2013 — Barataria Bay, located in the northern Gulf of Mexico, received heavy and prolonged oiling after the 2010 Deepwater Horizon oil spill. This area is also home to many bottlenose dolphins. In the wake of the spill, how healthy are dolphins living in this area? And how do they compare to dolphins living elsewhere?

As part of the Natural Resource Damage Assessment for the Deepwater Horizon oil spill, a team of more than 50 government, academic, and non-governmental researchers assessed the health of bottlenose dolphins living in Louisiana's Barataria Bay, which received heavy oiling following the Deepwater Horizon spill, and in Florida's Sarasota Bay, which was not oiled following the spill. The team of scientists and veterinarians temporarily captured live dolphins, performed comprehensive health examinations on them at the site, and then released them. The health exam included measuring each dolphin's length and weight; doing a physical exam; sampling skin, blood, and blubber; and performing an ultrasound to evaluate their internal organs, particularly their lung condition and pregnancy status. The team has published the results of this study in the peer-reviewed journal Environmental Science & Technology. We spoke with two of the NOAA scientists involved, Dr. Lori Schwacke and Dr. Teri Rowles, to learn more about the research and what their findings mean for dolphins in the Gulf of Mexico.

Q: When did you conduct the dolphin health assessments and what did you observe?

The first health assessments were conducted in the summer of 2011 in Barataria Bay, La., and in Sarasota Bay, Fla. We found that the dolphins in Barataria Bay were in very poor health. Many of them were underweight and their blood tests showed a number of abnormal conditions such as anemia, elevated markers of inflammation, and increased liver enzymes. Also, one rather unusual condition that we noted in many of the Barataria Bay dolphins was that they had very low levels of some hormones (specifically, cortisol) that are produced by the adrenal gland and are important for a normal stress response. Under a stressful condition, such as being chased by a predator, the adrenal gland produces cortisol, which then triggers a number of physiological responses including an increased heart rate and increased blood sugar. This gives an animal the energy burst that it needs to respond appropriately. In the Barataria Bay dolphins, cortisol levels were unusually low. The concern is that their adrenal glands were incapable of producing appropriate levels of cortisol, and this could ultimately lead to a number of complications and in some situations even death. We also found significant lung disease. We looked for several different abnormalities based on studies that have been done on captive animals, and what we saw was most consistent with pneumonia. In some of the animals, the lung disease was so severe that we considered it life-threatening for that individual.

Q: How serious were the conditions observed in dolphins from Barataria Bay?

Some of the conditions observed in these dolphins were very serious. Some of the animals had multiple health issues going on, such as lung disease, very high liver enzymes, and indications of chronic inflammation. The veterinarians assigned a prognosis for each animal and nearly half of the Barataria Bay dolphins were given a guarded (uncertain outcome) or worse prognosis. In fact, 17 percent of them were given a poor or grave prognosis, indicating that they weren’t expected to live. In comparison, in Sarasota we had only one guarded prognosis and the rest were in good or fair condition. Sarasota dolphins were much healthier than Barataria Bay dolphins.

Q: Have you been able to follow up on the status of any of the dolphins examined during these assessments? We know one of them died. Y12 was a 16-year-old male that we examined in August 2011. He was underweight and many of his blood parameters were out of the expected range. The veterinary team assigned him a grave prognosis. His carcass was recovered by the Louisiana Department of Wildlife and Fisheries in January of 2012. So we know that he only survived a little over five months after the health assessment was conducted. But often carcasses aren't recovered, and there were other dolphins that we examined that we didn't expect to live for very long. 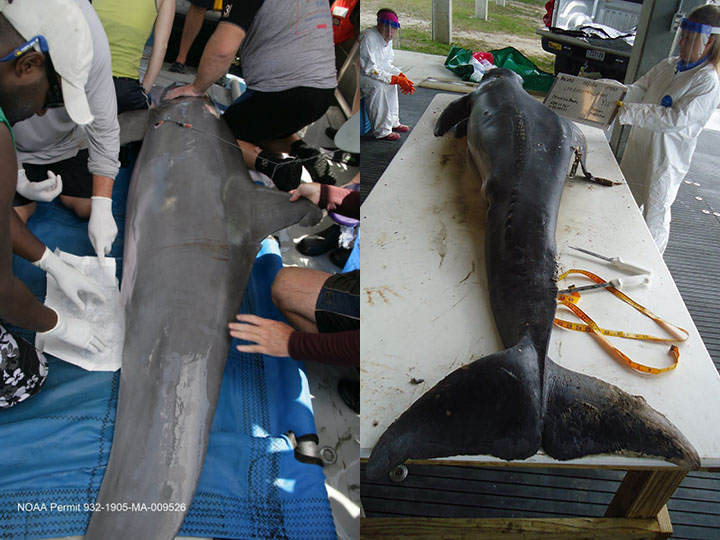 We're also conducting photographic monitoring studies to monitor the survival and reproductive success or failure of the dolphins we sampled. Several of the females we sampled in Barataria Bay were pregnant so we’ve been monitoring them around and past their due date to see whether or not we see them with a calf. The gestation period for a dolphin is around 12 months, so these monitoring studies take a little bit longer. We hope to report those results soon.

Q: Are the disease conditions observed in Barataria Bay dolphins—lung disease, compromised stress hormone response—consistent with those expected from exposure to oil? The decreased cortisol response is something fairly unusual but has been reported from experimental studies of mink exposed to fuel oil. The respiratory issues are also consistent with experimental studies in animals and clinical reports of people exposed to petroleum hydrocarbons.

Q: How do you know these health impacts weren’t caused by other lingering pollutants in the Gulf? 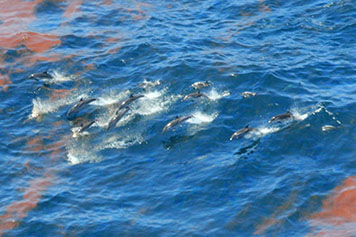 Following the Deepwater Horizon oil spill, numerous dolphins were documented encountering oil, such as those in this photo from July 2010. (NOAA)

We analyzed the dolphins' blubber to evaluate the levels of contaminants that have been previously reported in marine mammal tissues and then also linked with health effects. This covered a fairly broad suite of contaminants and included polychlorinated biphenyls (PCBs) as well as a suite of persistent pesticides that we know accumulate in dolphins over their lifetime, leaving a record of their exposure. We found that the levels of these pollutants in Barataria Bay dolphins were actually lower than the levels in Sarasota Bay dolphins. The levels from Barataria Bay dolphins were also low compared to previously reported levels in dolphins from a number of other coastal sites in the southeastern U.S. Therefore, we don’t think that the health effects we saw can be attributed to these other pollutants that we looked at.

Q: Are there more dolphin health assessments currently taking place or planned for the future?

Yes, in the summer of 2013 we repeated the studies in Sarasota Bay and Barataria Bay and expanded the studies to Mississippi Sound, where we assessed dolphins both in Mississippi and in Alabama waters. Those samples and data are still being analyzed. 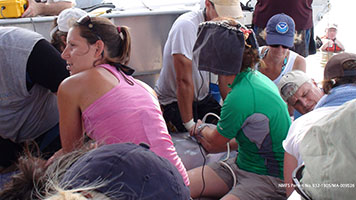 Q: Was there anything about this study that you found surprising?

The magnitude of the health effects that we saw was surprising. We've done these health assessments in a number of locations across the southeast U.S. coast and we've never seen animals that were in this poor of condition.

Q: How does this study relate to or inform the investigation of the high number of marine mammal strandings observed along the Gulf Coast since February 2010 (the Unusual Mortality Event), which pre-dates the Deepwater Horizon oil spill?

The Unusual Mortality Event that’s underway is in the same general geographic area as the Deepwater Horizon oil spill response and overlaps with the Natural Resource Damage Assessment. These findings overlap with the high number of strandings, particularly in the Barataria Bay or central Louisiana area. When you have a significant event like an oil spill or an Unusual Mortality Event, being able to study both live and dead animals provides more information about what might be going on as animals get ill and then die. Having access to findings from both of these studies enables us to look for commonalities between what we’re finding in the sick animals and what we’re finding in the dead animals to better evaluate causes and contributing factors.

Q: Outside of NOAA, who else did you work with to perform the health assessment?

This work was part of the Deepwater Horizon Natural Resource Damage Assessment being conducted cooperatively among NOAA, other federal and state trustees, and BP. This wouldn't have been possible without the help of a number of our partners, including the National Marine Mammal Foundation, Chicago Zoological Society, and Louisiana Department of Wildlife and Fisheries. Also, Seaworld and the Georgia Aquarium provided personnel to support our studies. Their expertise and experience were key to getting these studies done. Watch a video of the researchers as they temporarily catch and give health exams to some of the dolphins in Barataria Bay, La., in August of 2011: