For Submerged Oil Pollution in Western Gulf of Mexico, Restoration Is Coming After 2005 DBL 152 Oil Spill 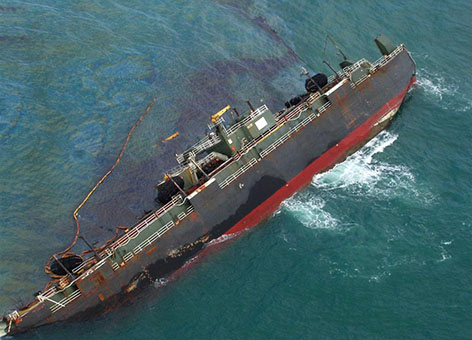 The DBL 152, shown here on November 13, 2005 shortly before capsizing, ended up discharging nearly 2 million gallons of a thick slurry oil, which sank to the floor of the Gulf of Mexico. (ENTRIX)

MARCH 18, 2013 — Imagine trying to describe the state of 45,000 acres of habitat on the ocean bottom—an area the size of over 34,000 football fields. And you have to do it without four of your five senses. You can't touch it. You can't taste it. You can't smell it. You can't hear it. Sometimes you can barely see a few inches in front of your scuba mask as you swim 60 feet below the surface in the murky waters of the Gulf of Mexico. But that was the task NOAA scientists faced seven years ago in the wake of a large offshore oil spill in the western Gulf of Mexico.

The oil was released from tank barge (T/B) DBL 152 as it was traveling from Houston, Texas, to Tampa, Fla., in November 2005. While in transit, the barge struck the submerged remains of a pipeline service platform that collapsed a few months earlier during Hurricane Rita. The double-hulled barge was carrying approximately 5 million gallons of slurry oil, a type of oil denser than seawater, which meant as the thick oil poured out of the barge, it sank to the seafloor. Eventually, the barge's tug was able to tow it toward shore, hoping to ground and stabilize it in shallower waters. However, the barge grounded unexpectedly 30 miles from shore, releasing more oil and eventually capsizing. Approximately 1.9 million gallons of oil drained into the open waters of the Gulf of Mexico.

To find, track, and clean up the oil in these cloudy waters, oil spill responders used information from divers, remotely operated vehicles (ROVs), and oil trajectory models. Executing this process over such a large area of the seafloor took more than a year. While divers were able to recover an estimated 98,910 gallons of oil, some 1.8 million gallons more remained unrecovered.

NOAA's Damage Assessment, Remediation, and Restoration Program (DARRP) provides the unique scientific and technical expertise to assess and restore natural resources injured by oil spills like the DBL 152 incident as well as releases of hazardous substances and vessel groundings. For more than 20 years, DARRP has worked cooperatively with other federal, tribal, and state co-trustees and responsible parties to assess the injuries and reverse the effects of contamination to our marine resources, including fish, marine mammals, wetlands, reefs, and other ocean and coastal habitats.

So what happened to the other 1.8 million gallons of oil which were not feasible to clean up? Initially, the oil sank to the ocean bottom, creating a "footprint" of the impacted area. 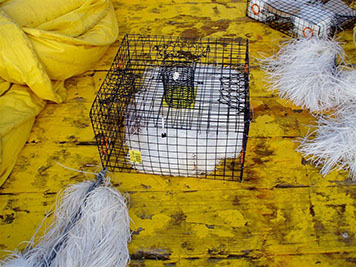 Crab pot sentinels used to detect submerged oil on the seafloor in the Gulf of Mexico. (ENTRIX, Dec. 3, 2005)

Immediately following the spill, NOAA, the U.S. Coast Guard, Texas state trustees, and the responsible party worked together to assess impacts to natural resources and habitats affected by the spill. Scientists collected and analyzed oil samples, bottom-dwelling animals living in the sediments, and samples of sediments and water taken in the oiled areas. In particular, creatures on the seafloor were at risk of being smothered or contaminated by the dense oil as it sank to the bottom.

As you might expect, assessing injuries to an area of the open ocean covering 34,000 football fields is no easy task, especially considering how difficult it is to detect the oily culprit itself. Because we couldn't always see the submerged oil over such a large area, oil-absorbing pads were dragged systematically across miles of ocean to locate patches of oil. Underwater sorbent "sentinels," oil-absorbing tools used to detect oil, also were placed and monitored strategically in the predicted path of the spilled oil to tell us if the footprint of the remaining oil at the ocean bottom was relatively stationary, and if not, in what general direction it was moving.

Monitoring revealed the oiled area was moving and dissipating over time as it weathered due to exposure to physical forces such as currents. The environmental assessment showed that fish and organisms living on or near the ocean floor (such as worms, clams, and crabs) were injured by the oil that sank to the bottom of the Gulf of Mexico. That submerged oil impacted approximately 45,000 acres of ocean floor. However, much of this area recovered over time as the oil naturally dissipated and weathering broke it up. 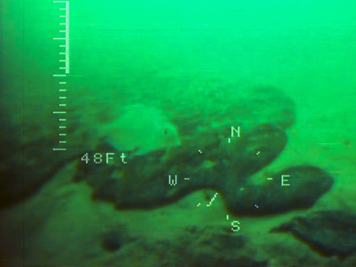 Submerged oil from Tank Barge DBL 152 on the seafloor in the Gulf of Mexico. (EXTRIX, December 2005)

In March 2013, NOAA released the Damage Assessment and Restoration Plan [PDF] for the DBL 152 incident, which demonstrates that restoration is possible for this oil spill. The plan outlines injuries to natural resources and proposes a restoration project to implement estuarine shoreline protection and salt marsh creation at the Texas Chenier Plain National Wildlife Refuge Complex in Galveston Bay, Texas. The preferred shoreline protection and marsh restoration project proposed in the draft plan is designed to replenish the natural resources lost due to the oiling during the period both when they were injured and while they recovered. 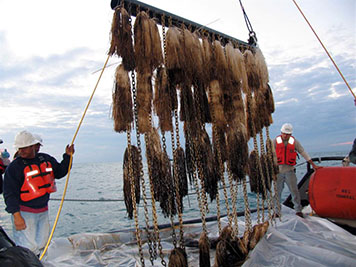 Heavy chains dragged absorbent material along the seafloor in the Gulf of Mexico in order to detect submerged oil. (ENTRIX, 11/19/2005)

Public comments can be submitted through April 15, 2013 by mailing written comments to: NOAA, Office of General Counsel, Natural Resources Section Attn: Chris Plaisted 501 W. Ocean Blvd., Suite 4470 Long Beach, CA 90802 Or submitting comments electronically at www.regulations.gov (Docket I.D.: NOAA-NMFS-2013-0034). Following the close of the public comment period, NOAA will consider any comments and release a Final Restoration Plan. This comment period is the last step before restoration projects are selected and funding is sought from the Oil Spill Liability Trust Fund for implementation.

Since the party responsible for the oil spill reached its legal limit of liability and is not obligated to pay further liabilities by law, NOAA will submit a claim to the National Pollution Funds Center (NPFC), administered by the U.S. Coast Guard, to cover the cost of enacting the needed environmental restoration. The Pollution Funds Center serves as a safety net to help cover the costs of reclaiming our nation’s invaluable natural resources following these types of events.