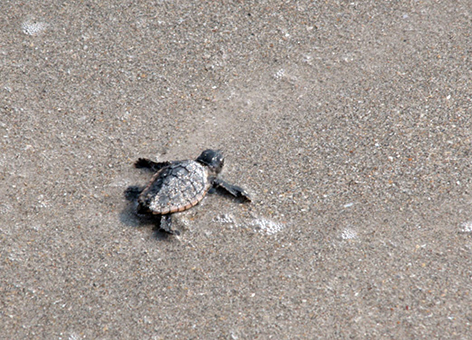 NOV. 26, 2012 — The public has until December 10, 2012, to submit comments on $9 million in early restoration projects related to the 2010 Deepwater Horizon/BP oil spill. This draft early restoration plan includes two projects aimed at restoring injuries to bird and sea turtle nesting habitats around the Gulf of Mexico. In the wake of the 2010 well blowout, the pollution response operations disturbed these sensitive habitats. The natural resource trustees, including NOAA, hope to have the habitat improvements in place for the spring 2013 nesting season. Part of BP's $1 billion funding for early restoration in the Gulf, this second round of projects includes the following proposals:

You can submit your comments on these projects in the following ways:

The trustees considered projects based on criteria laid out in federal and state regulations and in the agreement with BP. This is the second in a series of draft early restoration plans developed outlining projects agreed to by the trustees and BP and presented for public input. These draft plans will be finalized to ultimately form a Final Early Restoration Plan. To access both Phase I and II Draft Early Restoration Plans and Environmental Reviews, as well as additional details on the proposed projects, please visit NOAA's Gulf Spill Restoration website. The long-term damage assessment will continue while early restoration planning is under way. BP and the other responsible parties ultimately will be obligated to compensate the public for the entire injury and all costs of the natural resource damage assessment.