Submit Your Comments: Studying Decades of Environmental Injuries at the Hanford Nuclear Site 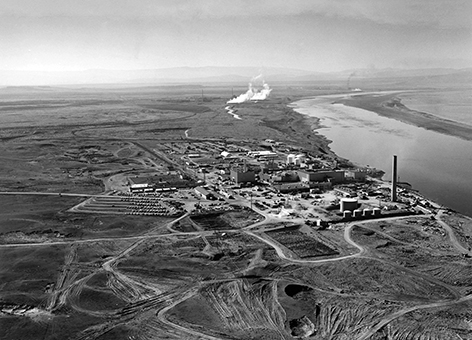 Nuclear reactors line the riverbank at the Hanford Site along the Columbia River in January 1960. The N Reactor is in the foreground, with the twin KE and KW Reactors in the immediate background. The historic B Reactor, the world's first plutonium production reactor, is visible in the distance. (U.S. Dept. of Energy)

DEC. 12, 2012 — Interesting things are happening at Hanford. After decades of nuclear production, years of cleanup, and chronic contamination, the time has come to begin restoring the land and natural resources of Hanford, Wash. That's why NOAA, along with other agencies and tribes, has started a natural resource damage assessment and is now publishing a document for public review. The Draft Injury Assessment Plan [PDF] describes the first phase of the restoration process, which is to quantify harm to natural resources at the Hanford Nuclear Site. For those of you unfamiliar with the history of the site, between 1944 and 1987, Hanford, located in eastern Washington state, produced plutonium for atomic weapons, starting with the "Fat Man" bomb dropped on Nagasaki, Japan, in 1945.

During the Cold War years, the facilities grew to include nine nuclear reactors and associated processing plants. For decades, Hanford produced radioactive materials for Cold War-era military activities, commercial nuclear energy production, and nuclear medicine. These operations led to the release of radionuclides and contaminants into the arid landscape and the Columbia River, which borders the site, injuring the habitats, wildlife, and people's ability to enjoy the area for recreational and cultural uses. Cleanup at the site began in 1989 and likely will continue well into the future. However, we are concerned about the chronic environmental impacts and believe there is a need to begin restoration now to offset the more than 30 years of injury. Our efforts are different than cleanup. Cleanup involves removing contaminated materials such as buildings, waste, and soil from the landscape. 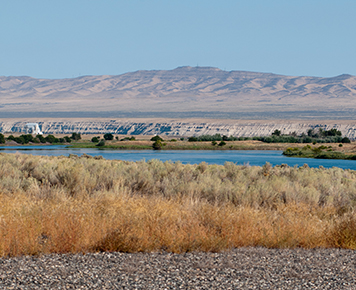 The now-remediated F Reactor, a former plutonium productor reactor, sits across the Columbia River at the Hanford Nuclear Site. NOAA and the other natural resource trustees hope to begin reversing the decades of environmental harm at this site. (U.S. Dept. of Energy)

Restoration, on the other hand, involves accounting for and offsetting the harm done to natural resources that continue to feel these impacts while waiting for full cleanup at the site. For example, during past operations at Hanford, leaks and overflows caused contaminants from nuclear reactors to flow directly into the Columbia River, and even though the facilities have long since been closed, the contaminants in the groundwater, such as chromium, have continued to leach into the river to the present day. These contaminants have reached Chinook salmon spawning grounds and the forage and resting areas for sensitive young salmon near the shoreline. This is why NOAA, other agencies, and local tribes believe it is time to begin restoration planning.

The Draft Injury Assessment Plan, which is available for your review, is the first step in planning restoration. We are required by law to describe and quantify harm to impacted habitats and species before we can begin restoration on land or in the river, and we have created a Draft Injury Assessment Plan to accomplish that. No one has completed this kind of assessment at Hanford before, and it will be a challenging and complex task. First, we will pull from existing scientific studies, Hanford site documents, and historical information to create a picture of what harm has been done to the natural resources. Then, we will plan additional studies only where the picture is not already clear. Once we fill in these missing pieces with data, we will be better prepared to determine the scale and type of restoration needed and begin the appropriate projects. 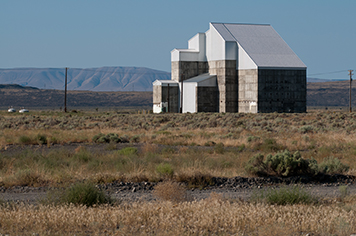 F Area is home to F Reactor, the third of Hanford’s nine plutonium production reactors built to produce plutonium for the nation’s defense program during both World War II and the Cold War. The reactor operated from 1945 to 1965 and was placed in interim safe storage in 2003. (U.S. Dept. of Energy)

Assessing past, present, and future environmental injuries will not be easy, which is why we need your input on our plan. Let us know what you think of our proposed approach. You can find out more about our efforts and obtain copies of the Draft Injury Assessment Plan [PDF] at www.hanfordnrda.org.