Like a Summer Blockbuster, Oil Spills and Hurricanes Can Take the Nation by Storm 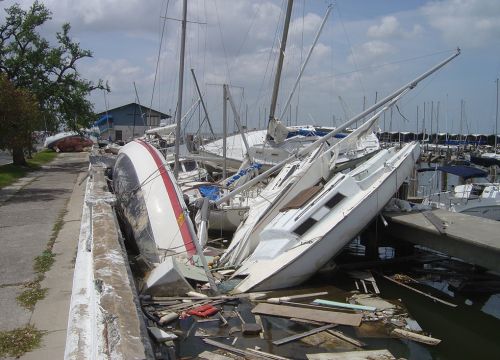 The powerful wind and waves of a hurricane can damage vessels, releasing their fuel into coastal waterways. (NOAA)

MAY 29, 2015 -- From Twister and The Perfect Storm to The Day After Tomorrow, storms and other severe weather often serve as the dramatic backdrop for popular movies.

Some recent movies, such as the Sharknado series, even combine multiple fearsome events—along with a high degree of improbability—when they portray, for example, a hurricane sweeping up huge numbers of sharks into twisters descending on a major West Coast city. But back in the world of reality, what could be worse than a hurricane? How about a hurricane combined with a massive oil spill? It's not just a pitch for a new movie. Oil spills actually are a pretty common outcome of powerful storms like hurricanes.

There are a couple primary scenarios involving oil spills and hurricanes. The first is a hurricane causing one or more oil spills, which is what happened during Hurricane Katrina in 2005 and after Hurricane Sandy in 2012. These kinds of oil spills typically result from a storm’s damage to coastal oil facilities, including refineries, as well as vessels being damaged or sunken and leaking their fuel.

The second, far less common scenario is a hurricane blowing in during an existing oil spill, which is what happened during the 2010 Deepwater Horizon oil spill.

Stranded and wrecked vessels are one of the iconic images showing the aftermath of a hurricane. In most cases those vessels have oil on board. And don't forget about all the cars that get flooded. Each of these sources may contain relatively small amounts of fuel, but hurricanes can cause big oil spills too. Additional damage is often caused by the storm surge, as big oil and chemical storage tanks can get lifted off their foundations (or sheared off in the case of the picture below). 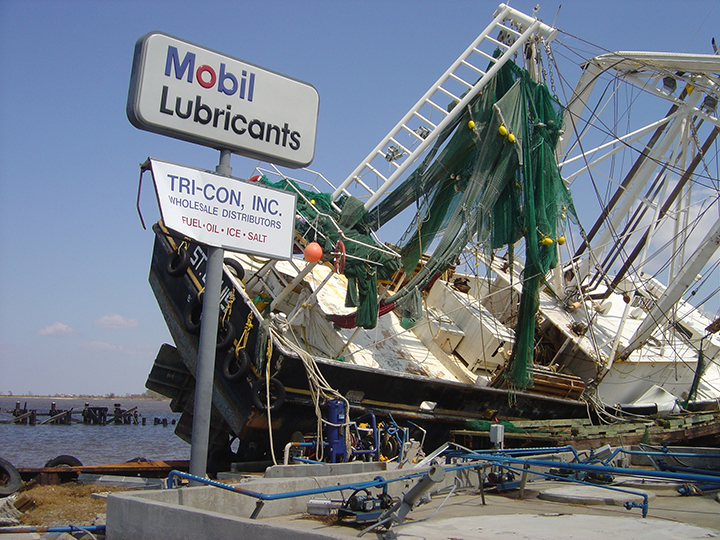 A boat, displaced and damaged in the aftermath of Hurricane Katrina, in late summer of 2005 in the Gulf of Mexico, an area frequented by both hurricanes and oil spills. (NOAA)

Hurricanes Katrina and Rita in 2005 passed through the center of the Gulf of Mexico oil industry and caused dozens of major oil spills and thousands of small spills. One of the largest stemmed from the Murphy Oil refinery in St. Bernard Parish, Louisiana. Dikes surrounding the oil tanks at the refinery were full from flood waters, so when a multi-million gallon tank failed, oil flowed easily into a nearby neighborhood, leaving oil on thousands of homes and businesses already reeling from the flood waters.

Hurricanes can also create navigation hazards that result in later spills. Hurricane Rita, hitting the Gulf in September 2005, sank several offshore oil platforms. While some were recovered, others were actually left missing. Several months later, the tank barge DBL 152 "found one of these missing rigs, spilling nearly 2 million gallons of thick slurry oil after striking the sunken and displaced platform hiding below the ocean surface. 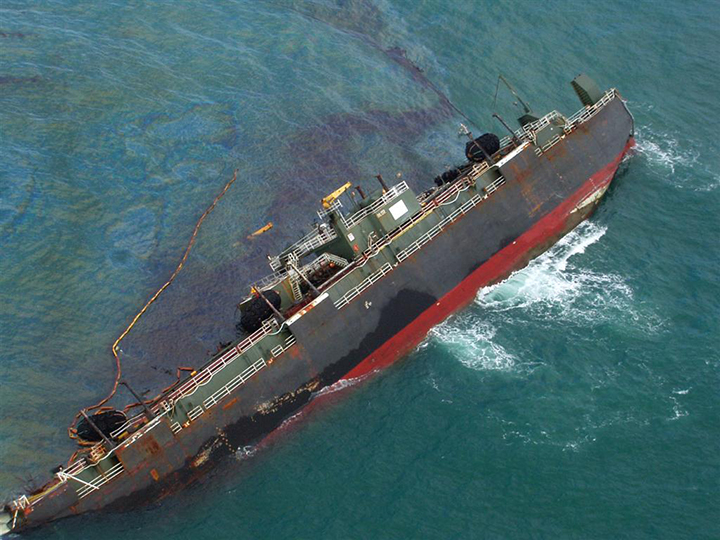 In November 2005, tank barge DBL 152 struck the submerged remains of a pipeline service platform that collapsed a few months earlier during Hurricane Rita. The double-hulled barge was carrying approximately 5 million gallons of slurry oil, a type of oil denser than seawater, which meant as the thick oil poured out of the barge, it sank to the seafloor. (Entrix)

Oil Spills and Then a Hurricane Hits

So what happens if a hurricane hits an existing oil spill?

This was a big concern during the summer of 2010 in the Gulf of Mexico. There was an ever-growing slick on the ocean surface, oil already on the shore, and lots of response equipment and personnel scattered across the Gulf cleaning up the Deepwater Horizon spill.

There was a lot of speculation as to what might happen as hurricane season began. Hurricane Alex, a relatively small storm, was the first test. The first impact came days before the storm, as response vessels evacuated the area. Hurricane Alex halted response efforts such as skimming and burning for several days. Hundreds of miles of oil booms protecting the shoreline were displaced by the growing surf.

As the hurricane passed through, floating oil was quickly dispersed by the powerful winds and waves, and the same wave energy buried, uncovered, and moved oil on the shore or in submerged mats of oil near the shoreline. Some oil was likely carried inland by sea spray and flood waters from the storm surge. Oil dissolved in the water column near the surface became even more dispersed, but the deep waters of the Gulf were well out of reach of the stormy commotion at the surface, and the leaking wellhead continued to gush.

But the Deepwater Horizon spill wasn’t the only time hurricanes have butted heads with a massive spill. In 1979, Mexico's Ixtoc I well blowout in the southern Gulf of Mexico was hit by Hurricane Henri. The main impact of the hurricane's winds was to dilute and weather the floating oil.

In some places along the Texas coast, beached oil was washed over the barrier islands into the bays behind them, while in other areas stranded oil was buried by clean sand. Many of these oiled areas were reworked a year later when Hurricane Allen battered the coast.

Preventing oil spills is a part of preparing for hurricanes. Coastal oil facilities and vessel owners do their best to batten down the hatches and get their vessels out of harm's way, but we know that spills may still happen. Atlantic hurricane season, which runs from June 1 to November 30, is a busy time for those of us in oil spill response, and we breathe a sigh of relief when hurricane season ends—just in time for winter storm season to begin.