A Superfund Success for Marsh Restoration near Galveston Bay, Texas 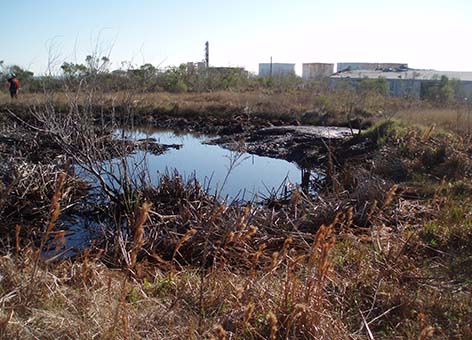 Oil pits dominate the landscape at the Superfund site where the Malone Service Company processed waste chemicals and oils from 1964 to 1996. (NOAA)

OCT. 1, 2012 — In many ways, the Superfund site at the former home of the Malone Service Company in Texas City, Texas, is just like the hundreds of other waste sites scattered across this country.

It is located on what was once undeveloped land, bordered by productive wetland and marsh, a lake, and Galveston Bay, the nation's seventh largest estuary.

The stream of pollution began back in the 1960s when the company set up shop as an industrial waste disposal facility. This was before a veritable flood of federal and state laws (like the Clean Water Act and the Comprehensive Environmental Response, Compensation and Liability Act, a.k.a., CERCLA or the Superfund Law) began to regulate or prohibit dumping hazardous waste into the environment. (But mismanagement of the waste continued even after CERCLA was passed in 1980.)

The list of those potentially responsible for the pollution is long and ranges from large businesses to government entities to small private companies. 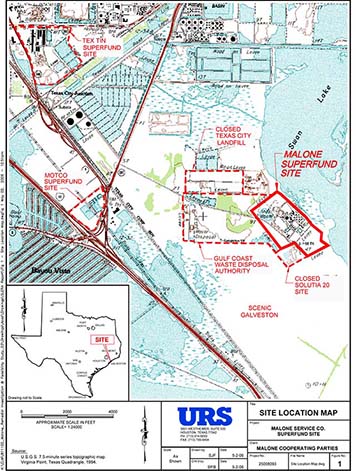 Here too, the contamination was varied (e.g., heavy metals, potentially toxic oil residues) and comprehensive, affecting the soil, water, and underwater sediments [PDF]. And, of course, it injured a number of natural resources, including birds, aquatic life, and their habitats.

What sets this case apart from most is that those potentially responsible for the pollution and the state and federal governments were able to work together to reach an agreement to clean up and restore the affected natural resources—no easy feat considering the long and complicated history.

Office of Response and Restoration scientist Jessica White entered the scene in 2004, working as a scientist to investigate how bad the contamination was and which natural resources were impacted. She has continued working on the Malone site as it makes its way from remediation toward recovery and long-term monitoring.

By participating in the Superfund process, she and the rest of the trustees (charged with protecting public natural resources) were able to get the information needed to conduct the damage assessment of those resources without having to perform independent studies. This saved both time and money.

Fortunately, this group was also able to contribute to this restoration process everything they know about these animals, plants, and habitats, ensuring that the environmental impacts were adequately addressed and that further impacts from cleanup would be minimized. Collaborating with the U.S. Environmental Protection Agency (EPA), which leads Superfund cleanups, made this a win-win situation. 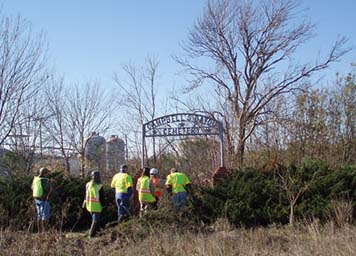 The cemetery for the 19th century settlement known as Campbell's Bayou, a state historic site, is actually located on the Malone waste site. Restoration experts had to work around the cemetery. (NOAA/Jessica White)

(And in a highly unusual twist, the team had to work around a cemetery for the old settlement of Campbell's Bayou, which is a state historic site.)

So, how much would it cost to restore, replace, or acquire the equivalent of these injured habitats? After adding in the cost of a few other things, such as monitoring the environment's future health, the trustees and those paying finally settled on $3 million in damages.

Still ahead, however, is identifying the most appropriate restoration projects to make up for these losses. Likely restoration will take the form of preserving marsh habitat or acquiring marsh and oak motte (grove) habitat. It could even mean constructing new marsh nearby.

On top of the $3 million for restoration is another $56.4 million to clean up the remaining pollution. This remediation, which the EPA will oversee, will be the first step toward primary on-site restoration of the Malone Superfund site.

Unlike many other waste sites which sit lingering across the country, the trustees, EPA, and potentially responsible parties have overcome many obstacles to remove this source of contamination from the Texas City community and restore the habitat for the natural resources depending on it.

Migrating birds, drawn to the coast, will no longer die in the open oil pits, whose watery surfaces lured them in. In the future, this land may offer instead a safe source of freshwater for birds and enjoyment for the bird watchers who follow them.