Supporting the Response to a Platform Fire and Oil Spill in Bayou Sorrel, Louisiana

MARCH 17, 2016 -- On the morning of March 15, 2016, the U.S. Coast Guard requested assistance from NOAA's Office of Response and Restoration for an oil production platform fire near Berry Lake in Bayou Sorrel, Louisiana. While crews were working to dismantle the platform, one of the oil storage tanks caught fire. No injuries have been reported. The U.S. Coast Guard is leading the response with state and local agencies. The platform and one of its storage tanks burned throughout the day on March 15 before the tank partially collapsed, releasing crude oil into a canal. Most of the oil released from the tank continued to burn on the water surface and was consumed. Responders contained the remaining oil and burn residue in the canal with boom. A second tank on the platform subsequently caught fire but has been extinguished. The two storage tanks had a maximum capacity of more than 33,000 gallons of crude oil. We are assisting the Coast Guard's response by coordinating local weather forecast support, modeling the potential trajectory of spills of oil or burn residue, and outlining the wildlife and habitats that could be at risk in the area. A NOAA Scientific Support Coordinator has reported to the response to provide further help and assess potential impacts of the oil spill. Bayou Sorrel is predominantly composed of seasonally flooded, forested wetlands with some patches of freshwater marshes and open canals. While oil is unlikely to penetrate flooded or water-saturated soils, it will readily coat and become mixed with floating debris such as branches and leaves. A variety of birds, particularly diving and wading birds and waterfowl, may be present in the area and might be at risk of coming into contact with oil, which can coat their feathers, be ingested, or inhaled. In addition, fish and invertebrates such as crawfish may be present or spawning in the marshy habitats surrounding the oil platform, and alligators and small-to-medium-sized mammals including mink and river otters may be nearby. In 2013, NOAA provided on-site technical support for an oil spill from a pipeline in Bayou Sorrel and helped coordinate a controlled burn of the spilled oil in the area's flooded, wooded swamps. Additionally, we assisted with other oil spills in this area in 2015, 2007, and 1988. Look for more information about the current oil spill and fire here and at the U.S. Coast Guard’s media site. 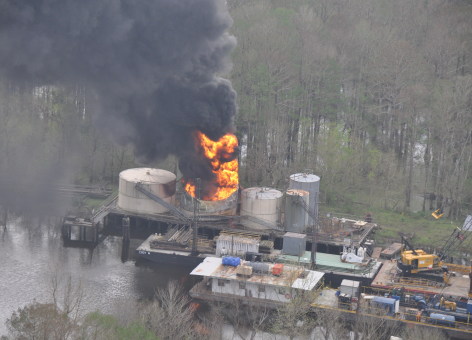 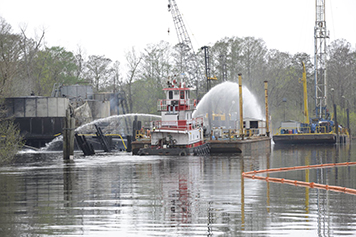 Response crews extinguished the fire and will continue to monitor the scene. (U.S. Coast Guard)
Back to top