NOVEMBER 13, 2013 -- Flowing freely through southeastern Washington is an approximately 50 mile stretch of the Columbia River known as the Hanford Reach. This unique section of river is birthplace and home to many animals at different stages of life, including Chinook salmon, the largest of the river's Pacific salmon. Yet this same segment of river at one time also served as the birthplace of the nuclear age: at the Hanford Nuclear Reservation. Today, NOAA, other federal and state agencies, and Indian tribes are still trying to determine the full impact of this nuclear legacy on fish, wildlife, and their habitats. Beginning in 1943, the Hanford Reach, with its steady supply of water and relative isolation, attracted the attention of the U.S. government during World War II. Searching for a location to erect nuclear reactors for the top-secret Manhattan Project, the U.S. was racing to build an atomic bomb and this work took shape at Hanford. The first nuclear reactor built at Hanford—and the first full-scale nuclear production plant in the world—was the B Reactor, which began operating in 1944. This and the other eight reactors eventually constructed at Hanford were located right on the Columbia River, an essential source of water to carry away the extreme heat generated by nuclear fission reactions. In these plants, workers turned uranium (euphemistically referred to as "metal") into weapons-grade plutonium (known as "product"). The plutonium eventually ended up in the atomic bomb dropped on Nagasaki, Japan, in 1945, as well as in nuclear arms stockpiled during the U.S.-Soviet Cold War. Hanford's last reactors shut down in 1987.


Top, left: Each knob controlled the flow of water to one of the 2,004 process tubes (bottom, left) which at one time held uranium fuel in the core of Hanford's B Reactor. Right: The "metal loader" was used to transport uranium, known to workers only as "metal," within the reactor. (NOAA) 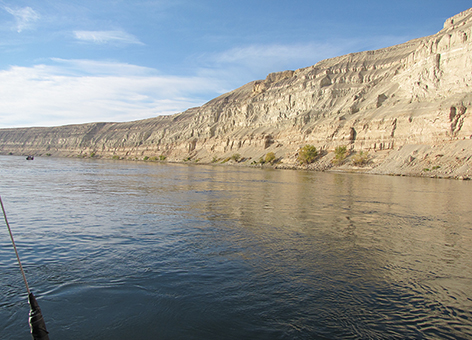 A view of the free-flowing section of Columbia River known as the Hanford Reach, along with the famous white bluffs that line it. (NOAA)

The River Runs Through It

While the nuclear reactors were operating, however, water was pumped from the Columbia River and aerated at a rate of 70,000 gallons a minute. This was meant to improve its quality as it flowed through a maze of processing equipment—pipes, tubes, and valves—and into the core, the heart of the nuclear reactor. There, in the case of B Reactor, about 27,000 gallons of water gushed through 2,004 process tubes every minute. Each tube held 32 rods of uranium fuel. 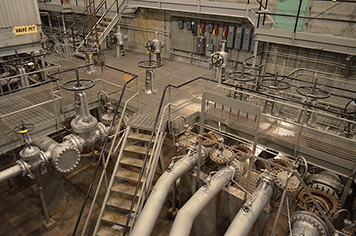 The "valve pit" in Hanford's B Reactor, where the thousands of gallons of water that cooled the nuclear reactor’s core passed through. (NOAA)

Inside the reactor's core, where the nuclear reactions were occurring, the water temperature would spike from 56 degrees Fahrenheit to 190 degrees in a single minute. Later in the reactor’s lifespan, the operators would be able to leave the water inside the nuclear reactor core long enough to heat it to 200 degrees before releasing the water into lined but leaky outdoor holding ponds. Once in the holding ponds, the reactor water would sit until its temperature cooled and any short-lived radioactive elements had broken down. Finally, the water would return to the Columbia River and continue its path to the Pacific Ocean. Water played such an essential role in the nuclear reactor that engineers had four levels of backup systems to keep water constantly pumping through the core. In addition to being aerated, the water was also filtered and chemically treated. To prevent the core's plumbing equipment from corroding, chromium was added to the water. Hanford's D Reactor, in particular, handled large quantities of solid hexavalent chromium, a toxic chemical known to cause cancer. 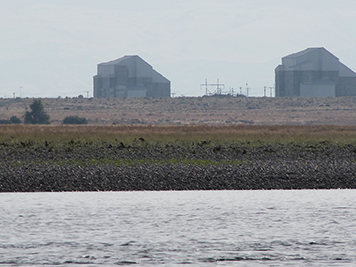 The Salmon Runs Through It 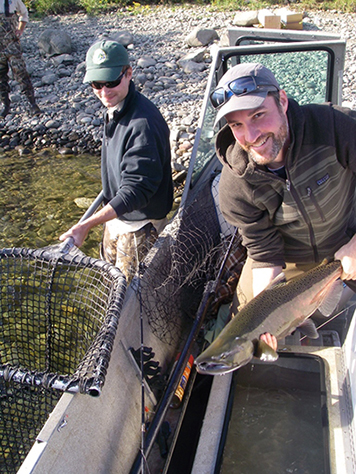 A NOAA scientist takes stock of a male Chinook salmon during their fall run along the Hanford Reach in 2013. (NOAA)

Fast-forward to 2013. NOAA and its partners are participating in a natural resource damage assessment, a process determining whether negative environmental impacts resulted from the Department of Energy's activities at Hanford. As part of that, NOAA is helping look at the places where water leaked or was discharged back into the Columbia River after passing through the reactors. One goal is to establish at what levels of contamination injury occurs for species of concern at Hanford. Salmon and freshwater mussels living in the Columbia River represent the types of species they are studying. Yet these species may face impacts from more than 30 different contaminants at Hanford, some of which are toxic metals such as chromium while others are radioactive isotopes such as strontium-90. Many of the Columbia River's Chinook salmon and Steelhead trout spawn in or migrate through the Hanford Reach. Currently, NOAA and the other trustees are pursuing studies examining the extent of their spawning in this part of the river and determining the intensity of underground chromium contamination welling up through the riverbed. This information is particularly important because salmon build rocky nests and lay their eggs in the gravel on the bottom of the river. You can learn more about the history of the Hanford Reach and the chromium and other contamination that threatens the river (around minute 8:50-9:03) in this video from the Department of Energy:

The trustees have many other studies planned, all trying to uncover more information about the natural resources and what they have been experiencing in the context of Hanford’s history. Yet, for the natural resource damage assessment, even if the trustees find salmon experiencing negative impacts, the evidence found needs to be tied directly to exposure to Hanford's pollution (rather than, for example, the influence of dams or pollution from nearby farms). It is a complicated process of information gathering and sleuthing, but eventually it will culminate in a determination of the restoration required for this critical stretch of habitat on the Columbia River. For more information, see: