Is There a Garbage Patch in the Great Lakes? 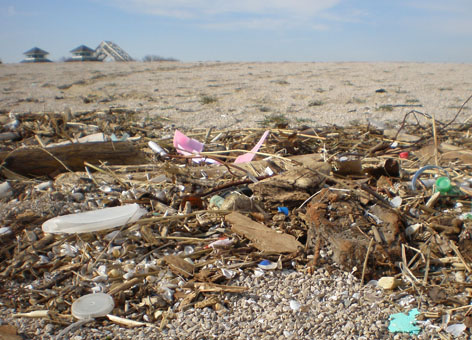 MAY 16, 2013 -- The "Great Pacific Garbage Patch"—a purported island of trash twice the size of Texas floating in the Pacific Ocean—receives a lot of media attention. Recent reports suggest that a similar garbage patch may be developing in the Great Lakes as well. However, based on research we know that the name "garbage patch" is misleading and that there is no island of trash forming in the middle of the ocean. We also know that there is no blanket of marine trash that is visible using current satellite or aerial photography. Yet, there are places in the ocean where currents bring together lots and lots of floatable materials, such as plastics and other trash. While the types of litter gathering in these areas can vary greatly, from derelict fishing nets to balloons, the kind that is capturing the most attention right now are microplastics. These are small bits of plastic often not immediately evident to the naked eye. While we know about the so-called "garbage patches" in the Pacific Ocean, could there be a similar phenomenon in other parts of the world, including the Great Lakes? Recent research on the distribution of plastics in the Great Lakes has people now asking that very question. The Great Lakes are no mere group of puddles. They contain nearly 20% of the world's surface freshwater and have a coastline longer than the East Coast of the United States. Within the Great Lakes system, water flows from Lake Superior and Lake Michigan, the lakes furthest west and highest in elevation, east into Lake Huron. From there, it travels through Lake St. Clair and the Detroit River into Lake Erie. Then, some 6 million cubic feet of water pass over Niagara Falls each minute and into Lake Ontario before flowing through the St. Lawrence River and into the Atlantic Ocean. This water flow influences circulation patterns within and between each of the lakes. Currents within the Great Lakes also are powered by wind, waves, energy from the sun, water density differences, the shape of the lakebed, and the shoreline. These circulation currents have the tendency to create aggregations of garbage and debris in certain areas, just like in the oceans. But, just as in the Pacific Ocean, this doesn’t mean the Great Lakes have floating trash islands either. 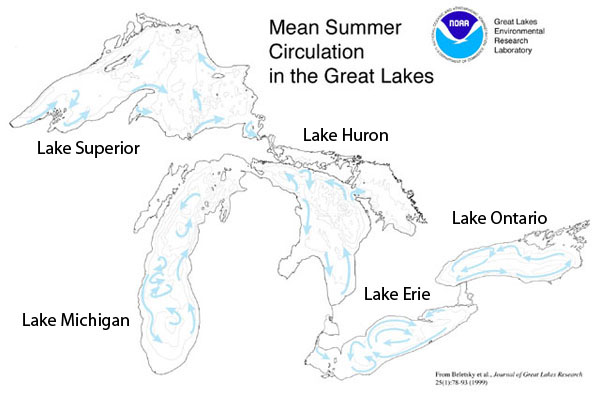 In an effort to better identify and understand how plastic debris is spread throughout the Great Lakes, researchers at the University of Waterloo in Canada have partnered with COM DEV on an exploratory research project. COM DEV is a designer and manufacturer of space and remote sensing technology. Researchers are working with this industry partner to develop and test the ability of different remote sensors to detect plastics in the Great Lakes. If they find the task is feasible and the trial runs prove to be effective, this work could be applied beyond the Great Lakes and across the United States. The NOAA Marine Debris Program, part of the Office of Response and Restoration, is engaged with and following the project. We plan to participate in the next steps of this promising effort. You can learn more about the project and a related workshop on plastic pollution in the Great Lakes. 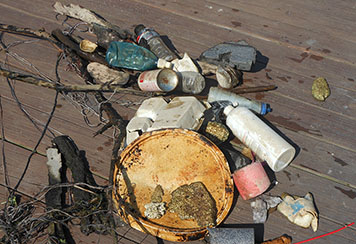 Plastic debris is found in Great Lake waters as well. This debris was pulled from a Lake Erie marina during a cleanup. (NOAA Marine Debris Program)
Back to top